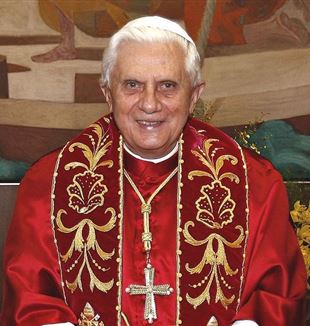 The speech given by Benedict XVI at the Bundestag represents another milestone on that arduous path to “broaden reason,” which began right there in Germany (on another September day, in 2006) at the University of Regensburg. At the German Parliament, the Pope went to the heart of a problem that doesn’t just concern politicians and those in power, but each of us in our daily actions–how do we recognize what is right? What is the understanding of what is right? If power is separated from right, from the need for justice, then the consequence described by St. Augustine in the City of God is inevitable: “Without justice, what else is the State but a great band of robbers?” The terrible experience of Nazism in Germany, like other totalitarian regimes, rendered this looming possibility a tragic historical evidence. To serve what is right and to combat the dominion of injustice remains the fundamental task of the politician. But this task cannot be reduced, in the modern democracies, to the criterion of parliamentary majorities, or to the functional correctness (though it be necessary) of procedures.

Benedict XVI had already dealt with this topic, which he took up again at the UN (April 2008), in his undelivered address at La Sapienza University in Rome (January 2008). Citing Jürgen Habermas, he had indicated the necessity of a reasonable form for the resolution of political conflicts, through a “process of argumentation sensitive to the truth.” Today it is not at all easy, he emphasized at the German Parliament, to recognize “what now corresponds to the law of truth, what is actually right and may be enacted as law.” This task has never been simple; today, due to the complexity and the contradictions of our society, it is particularly difficult.

An objective factor. With the example of King Solomon, who asked God for a listening heart in order to be able to render justice to his people and to know how to distinguish good from evil (1 Kings 3:9), the Pope identifies the existence of an objective factor, present in the individual, which guides him or her in the search for criteria for the formation of the law. From the very beginning, Christianity made a sharp distinction between religion and State, never imposing a revealed religious law on the State or society. Instead, Christianity looked to nature and reason, with their inherent correlation, for the true sources of law. Thus, it opened a fruitful dialogue between (Greek) philosophy and (Roman) legal thought, which permitted the birth of the Western legal culture that still, thr­­­ough the Christian Middle Ages, the Enlightenment, and the modern Constitutions, influences democracies throughout the world.

The correlation between nature and reason, the “listening heart” of King Solomon, also recalled by a famous passage in the Letter to the Romans (Rom 2:14f), is now dramatically in crisis. Positivism has reduced the concept of reason to the experimental knowledge typical of science, and nature to “an aggregate of objective data linked together in terms of cause and effect” (Kelsen). From this reduction follows the current central thesis of legal positivism (Hume’s famous “naturalistic fallacy”), that between “is” and “ought” there exists an insurmountable abyss. A conception of nature that is purely functional cannot open a way toward law and justice, which Kelsen, in fact, reduces to “an irrational ideal.” On the other hand, if “rational” in the strict sense is only that which is able to be experienced and falsified, other dimensions of knowledge cannot fall within this category–those dimensions that lead to the foundations of justice in the relationships among men.

Fresh Air
Scientific rationalism sanctioned the apparently definitive crisis of the classical notion of natural law, which had already been recognized by the same Cardinal Ratzinger in his dialogue with Habermas in 2004 in Munich: “The idea of natural law is today viewed as a specifically Catholic doctrine, not worth bringing into the discussion in a non-Catholic environment, so that one feels almost ashamed even to mention the term.”

In his speech, Benedict XVI does not intend to propose or contrast ideological schemes; rather, with his usual lucidity and calm, he considers the limit of positivist reason that presents itself as exclusive, depicted as a concrete bunker with no windows, a “self-constructed world” in which the human, with his original needs, suffocates. But how can we fling open the windows to “see the wide world”? How can reason find its greatness once again, without sliding into irrationality? How can nature appear again in its true depth, with its demands and its directives?

The path chosen by the Pope in order to respond surprised everyone with its genius and freshness. The development of the ecological movement, very significant in Germany since the 1970s, which brought “fresh air” into the cultural and political debate, brought to everyone’s attention “that matter is not just raw material for us to shape at will, but that the earth has a dignity of its own and that we must follow its directives.” And here, in an unexpected way, we see again a subject that is dear to the Pope, that of the rationality of matter and the world (think of his various statements about evolution and science), a language that can be discovered and embraced by reason and that refers back to the Logos, creative Reason, loving Reason.

To relearn how to see the signs and listen to the language of nature opens us to the rediscovery of the “ecology of man,” who possesses a nature that he must respect and not manipulate: “Man is not merely self-creating freedom.” True freedom is to respect and recognize one’s own nature which is given, not the product of one’s autonomous will. To let oneself be struck, amazed by this “being given” reopens the road to ponder “whether the objective reason that manifests itself in nature does not presuppose a creative reason, a Creator Spiritus?”

It is in the conviction concerning the existence of a Creator God that the inalienable rights of man, his inviolable dignity, and the equality of all men before the law, find their foundation.

This knowledge about reason can be ignored, but at the price of severing the roots of our common life, of our culture–which is born from the meeting of Jerusalem, faith in the God of Israel, Athens, the philosophical reason of the Greeks, and Rome with its legal thought–and, above all, of denying the evidence of the “listening heart” or, as Father Giussani teaches us, of the elementary experience proper to each man.

The most powerful barrier. Benedict XVI has once again surprised us by indicating the point from which it is always possible to restart the human adventure, from interpersonal relationships to civil co-existence, with all of its conflicts and problems; it is the heart, objective criterion, that each man possesses by nature, and that expresses, with its evidences and original needs, the openness of reason to the totality of reality. In the heart vibrates the irreducible elementary need for justice that, as Julián Carrón wrote in the introduction to Esperienza elementare e diritto (Elementary Experience and Law), “we all have inside of us and that constitutes the most powerful barrier against every attempt at power.”