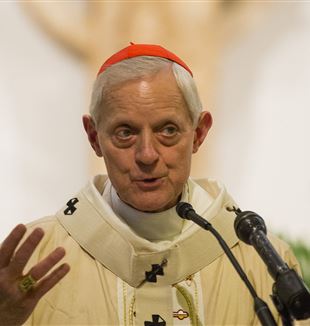 It isn't every day one meets a Cardinal such as Donald Wuerl, the Archbishop of Washington, who was only just elevated to the College of Cardinals by Pope Benedict XVI on November 20, 2010. His very long list of accomplishments since his ordination in 1966 might seem intimidating. I reconsidered my interview questions as I sat nervously waiting… And then a knock, and in he strode, with his gentlemanly bearing reminiscent of the great Cardinal John Henry Newman (with whom he shares a passion for education). Cardinal Wuerl instantly put me at ease with his personal warmth; his vigor belies his 70 years. In the generous amount of time he shared with Traces, his passion for Christ and the Church was evident; his love of Blessed John Paul II was clear; his desire to educate was manifest. He also tells us of his work in the Archdiocese, "one of the most complex in the country," his friendship with CL, and his hope for the future of the American Church.

Cardinal Wuerl, you have been elevated to new responsibility in the Church during dramatic times…
I think the Church is in a very real new moment. The Holy Father, Pope John Paul II and now Pope Benedict XVI call the Church to a New Evangelization–we are seeing now a moment of renewal. There are so many young who are very open to hearing the Gospel, open to encountering Christ, open to what the Church has to say. This is a most exciting part of ministry today–recognizing that this is the day, the time, the hour of the New Evangelization. We are facing our culture, our society, the people we deal with as if we were in that early, early Church, telling them the story of Jesus for the very first time–and there is an openness to it. There is an awareness that we don't live by bread alone; that we simply aren't consumers amassing things, buying things; that we are people called to a much greater destiny. We are invited into a relationship with God.

It seems you have always had this drive toward newness that comes with education–for example in the work on the Catechism (The Teaching of Christ) you wrote with the Lawler brothers. Where did this interest in education originate?
A lot of it goes back to that period in the early '70s when I realized how little catechetical material was available. The material that was being turned out in the late '60s and '70s was atrocious…. After I was named a bishop, I kept reflecting over and over again that the primary task of the bishop is to teach the faith; it is his responsibility to oversee what is being taught in the name of the Church in the diocese. To this day, I always take great joy when someone says to me–either a parent of a family or a priest–"You know, when I was in school, I used your Catechism."

You and Msgr. Bart Smith are the only two living Americans who have been at a conclave as non-Cardinals. As the secretary of Cardinal Wright [who was in a wheelchair], you were at the 1978 conclave when John Paul II was elected and you were also ordained Bishop by him. Can you describe being there at those different moments, and what this Pope has meant to you personally?
My earliest encounter with the future John Paul was when he was the Cardinal-Archbishop of Krakow and he was on the Congregation of the Clergy. He was very much interested in catechetics. Then there was that extraordinary moment, being there in the conclave, when he was elected Pope. It was shortly after that, in 1980, that John Paul II asked for an apostolic visitation of all the seminaries in the United States, and he appointed Bishop John Marshall of Burlington, Vermont, as the Apostolic Visitator, and I was appointed as the Executive Secretary for this project. That study went on from 1980 through 1986. Once a year, we'd have to go to Rome to make our report to the Pope. At the end of these annual meetings, the Holy Father always invited Bishop Marshall and myself to supper. So I had the incredible privilege of sitting at the table with the Pope–and he would ask lots of questions. Those were just very, very good moments. Then, on January 6, 1986, he ordained me a bishop and sent me to Seattle. As a bishop it was a very challenging time. We hear a lot about the hermeneutic of continuity and the hermeneutic of discontinuity. There I experienced a number of proponents of the hermeneutic of discontinuity. It was a lively encounter!

And, in 2006, you were appointed to the Archdiocese of Washington, DC–a unique and dynamic place, not without its own challenges.
Here, the Archdiocese is far more complex than anything I'd experienced before–perhaps the Archdiocese of Washington is the most complex in the country. It is not the largest but, however, it is the capital of the United States, the most influential nation on the planet. We have enormous cultural diversity and a huge immigration influx that has greatly changed the face of the Archdiocese. When the Pope was here for the Mass at Nationals Park in April of 2008, I wanted him to see the face and to hear the voice of the Church in our country. So we invited people from not only the Archdiocese but from the whole United States, representing all the great diversity of our country. After the Pope had celebrated the Mass and processed out from the cheering crowd of 50,000 people, when we got in the car, he turned to me and he said, "Archbishop, that Mass was a true prayer." It was what we hoped it would be.

Now, the Pope has created you Cardinal–what does this mean to you?
When the Holy Father named me a Cardinal, I said that this honor is directed to the Church of Washington, recognizing it for what it is: a very important Church. So the red hat really is directed to the importance of this Archdiocese–I just get to wear it. When the Pope announced that I had received as my titular church St. Peter in Chains in Rome, it was a moving moment. As his staff reminded me, in Rome there are only a few churches dedicated to Saint Peter, and Pope Benedict has the principal one. I went back to Rome just recently and took possession of this ancient church, which dates back to the fifth century. When Pope Leo sent a representative to the Council of Ephesus, he chose the pastor of this church and noted that it was already an ancient church of Rome. Kneeling before the relic case holding the chains that had bound Peter was a powerful, powerful moment. It is something that I will always cherish because it is a reminder that our loyalty is to Peter; he is the Rock upon which the Church is built. Faith and loyalty don't always come without a price, a chain. It reminded me that this is how Peter concluded his ministry–as a prisoner and a martyr.

With this unity with Rome in mind and going back to the New Evangelization, how do you see lay movements playing a role here in the Archdiocese? You have always been a friend of Communion and Liberation, saying Mass on Msgr. Giusanni's anniversary, accompanying the Good Friday Way of the Cross, and even speaking at the Diaconia meeting in San Diego a few years back…
Years ago, in the '70s, I met Fr. Giussani when I was in Rome and working with Cardinal John Wright. I had a great affection for Comunione e Liberazione, as it is known from its beginnings in Italy, because its members took seriously their obligation to know their faith. I had come to like them very much because these were people who had to struggle with and, in some instances, reappropriate the faith. Once they did, they wanted to share the good news. The reason that there is a natural bond between the New Evangelization and the lay movements–Communion and Liberation as a perfect example–is that the New Evangelization is all about coming to deepen one's own faith so that there is the motivation and courage to share it. Communion and Liberation deals with, grapples with such questions as, "What does it mean to be a believer, a follower of Jesus Christ, in this highly technological modern secular world?"–as well as other questions regarding coming to terms with one's faith so as to be prepared to bear witness to the Truth. That is what Communion and Liberation does. I have always felt a closeness to the Movement and that is why here in Washington I have always gone to the Good Friday Way of the Cross, walking through the streets to the National Mall. It is a way of doing two important things: renewing one's own faith and then bearing witness to it.

You said earlier that Blessed John Paul thought renewal of the priesthood was necessary for this renewal of the Church. That brings to mind the exciting fact that you are going to be opening a new seminary named after John Paul II.
The reason we're doing this is that we are getting such a response from young men who are saying, "I'd like to discern with you about the priesthood." This is the John Paul II generation; these are the people he touched, these are the ones who are saying, "I believe…" The renewal of the Church depends on renewal of the priesthood because the sacramental life, the Eucharistic life of the Church is the engine that drives it, and you need a priest for the Eucharist; you need a priest who can be the authentic link with the proclamation of the Gospel. We're opening a new seminary because we want to keep these young men close to our heart; we want to keep them close to the Archdiocese.

In the Pastoral Letter on the New Evangelization, Disciples of the Lord: Sharing the Vision, you say so beautifully that we are called to be "protagonists of hope."
We have to be continually looking to the future. Christ is Risen, the tomb is empty, and He has gone before us, challenging us: "Walk with Me." He says to us, "Walk with Me and you can make this world the beginning of the Kingdom. You can make this world a place of peace and truth and justice." We are a people of hope; we have to be protagonists of hope in saying, "This can happen if I do my part. This can happen if you do your part. All this can come about if we all collectively do our part." I think that is the call. When he was here, and in his encyclical Spe Salvi, Pope Benedict said, "The person who has hope lives differently." If we truly believe Christ is risen and we hope in that new life for ourselves, we're going to live differently.