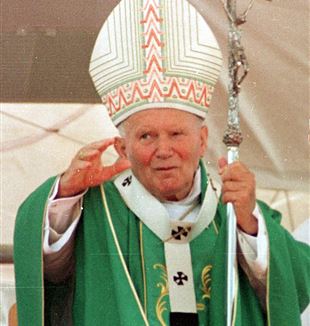 At a certain point, shortly before the Mass, we looked around, and Piazza Risorgimento, too, was full to overflowing. We had gone there at six in the morning, after two fruitless hours waiting in line at the beginning of Via della Conciliazione. Around us were CL high school students from Romagna, Italy, and elegant women who had just arrived from the Philippines; a group of Lebanese faithful, Croatian women in their traditional dresses, Spaniards, Argentineans, and Chileans; Poles in every nook and cranny and, everywhere, young people. There was a sampling of those waiting around us for miles, from Saint Peter's to the Circus Maximus, a million and a half people, each there with her or his own motives, her or his own reasons for gratitude to John Paul II, the blessed Pope who truly changed history by changing hearts. These reasons had been dissected, analyzed, and remembered in scores of newspaper pages about the fall of the Berlin Wall, the great journeys, the assassination attempt, the World Youth Days, the movements, Loreto, Assisi, the mea culpa's, and the suffering of his last years. We all had our own Karol Wojtyla imprinted in our memory, to honor. In the Square, in some way, it was evident.

But with the first words of Benedict XVI, it was clear that, deep down, there was really only one reason, the most powerful, the one that marked every moment of an extraordinary pontificate from the first words to the last silence: faith in Christ, "center of the cosmos and of history." Pope John Paul II was a witness to this his whole life, as has been his friend, Benedict XVI, whom everyone saw was profoundly happy to be able to say, "And now the longed-for day has come; it came quickly because this is what was pleasing to the Lord: John Paul II is blessed!" And he is blessed, continued Benedict XVI, "because of his faith, a strong, generous, and apostolic faith."

Faith, then, before and within everything else, is the only thread capable of uniting each thing and sustaining life, that of the new blessed, of his successor, and of those who were in the Square, and capable of giving a face to those people, a precise physiognomy. It wasn't a mass; it was a people–a strange, sui generis people, chaotic and multiform, but anything but confused. A people able to walk, to endure weariness, the sleepless night, the hours in car or bus, the pushing, the press, the difficulty of the walk... For this people, the things that so often upset us in daily life, didn't there in Rome. Of course there was weariness. Of course there were limits, all of them. But they weren't a problem. The heart was something else, and it was there, present, precisely in the grammatical sense of the verb.

From Rimini to Rome
There was a passage in Benedict XVI's homily that made our hearts leap: "Peter does not use language of exhortation; instead, he states a fact. He writes: "You rejoice," and he adds: "You love Him; and even though you do not see Him now, you believe in Him and rejoice with an indescribable and glorious joy, for you are receiving the outcome of your faith, the salvation of your souls" (1 Pet 1:6, 8-9). All these verbs are in the indicative, because a new reality has come about in Christ's Resurrection, a reality to which faith opens the door. "This is the Lord's doing," says the Psalm (118:23), and "it is marvelous in our eyes," the eyes of faith. You should re-read this homily, taking your time, because it encompasses everything: the contemporaneousness of Christ, the reasons that faith is to our advantage, the new life generated in the Resurrection. These are the same themes, the same thread that many present in Rome had fresh in mind because they had just come from a place where this was exactly what was spoken of in the previous days–at the CL Fraternity Exercises in Rimini that same weekend.

The "I" and History
For those who arrived at Saint Peter's from that retreat in Rimini, which closed a day early to allow the 26,000 participants to go to Rome (and they were there, together with other adults of the Movement, and high school and university students), the beatification of John Paul II was a particular grace. There will be time to reflect on it, certainly. But the impact was like seeing in flesh and blood, and immediately, much of what we had listened to in the halls of the Rimini Expo Center–from the beginning, from the "new creature" Saint Paul spoke of, to the end, to the description of authority as "the hand that offers us the event now," where "the verification of the prophecy is lived" and "Christ is experienced as the response to the needs of the heart." Those in the Square were there for this, nothing else. What this authority can be was–and is–before the eyes of everyone, in the testimony of the "life of a man who lets himself be grasped and drawn by Christ" (as Fr. Julián Carrón said, speaking of the new blessed in an interview with L'Osservatore Romano). It was powerful for those who had in mind what they heard at the Exercises about a worldly power that "cannot impede the reawakening of the 'I' in the encounter with Christ," but tries to "keep it from becoming history," to find themselves before a witness who challenged and built history, precisely starting from the continual call, from memory, of that Fact: "Do not be afraid! Open, open wide the doors to Christ!" As Benedict XVI commented in his homily, "What the newly elected Pope asked of everyone, he was himself the first to do: society, culture, political, and economic systems he opened up to Christ, turning back with the strength of a titan–a strength which came to him from God–a tide which appeared irreversible." He continued, "He directed Christianity once again to the future, the future of God, which transcends history while nonetheless directly affecting it. He rightly reclaimed for Christianity that impulse of hope which had in some sense faltered before Marxism and the ideology of progress. He restored to Christianity its true face as a religion of hope, to be lived in history in an 'Advent' spirit, in a personal and communitarian existence directed to Christ, the fullness of humanity and the fulfillment of all our longings for justice and peace."

The same thread, the same key words, but even in the silence that fell over the Square in two long moments of prayer–a silence that was full, total, and humanly impossible, if one thinks of the context–it was the echo of the other silence, that filled the heart on the buses on the way to Rimini. It was the sign of that Presence. Then, certainly, the silence ended. The songs and flag waving resumed in an air of celebration that made us think of that line of Fr. Giussani: "The victory of Christ is the Christian people." A people that left Rome a bit at a time, swarming slowly toward the train, the bus, the line on the highway entrance ramp, moving toward Monday, and a work to take up again and deepen. In other words, life. But new.