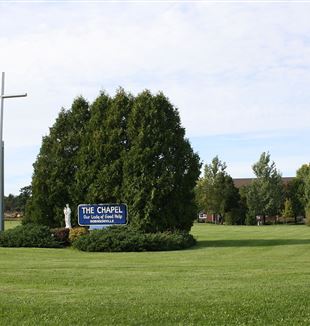 On December 8th of this past year, I read that Bishop David Ricken, of Green Bay, had declared the apparitions at the Shrine of Our Lady of Good Help worthy of belief. This was the first time an apparition has gained such recognition in the United States, according to the diocese and the U.S. Conference of Catholic Bishops. When I read the news, it flowed over me without much thought–after all, how could this news impact me?

Having been raised a Presbyterian, the idea of apparitions always seemed very exotic. When I was contemplating Catholicism, I was relieved to hear that the belief in apparitions was not required by the Church.

It wasn't until I visited the Shrine of Our Lady of Guadalupe in Mexico, some years after I became Catholic, that I understood how Marian apparitions and the subsequent devotions could bring me closer to my faith. The story of Our Lady of Guadalupe with Juan Diego and his tilma is very powerful. Upon visiting the huge basilica of Our Lady of Guadalupe, I saw the thousands of pilgrims being directly impacted by something that first occurred hundreds of years ago. In moments like these, it becomes quite clear that something is going on which is true.

But when I heard the news about the apparitions in tiny Champion, Wisconsin, just 90 minutes north of where I live, it somehow just didn't seem real for me. I thought that if I was living this close to something so important, I would have heard about it by now!

But, as often happens, a provocation from someone in front of me caused me to re-awaken my question. This came in the form of a proposal to visit the Shrine of Our Lady of Good Help as part of a GS youth group vacation. It was only then that the question came alive for me: If the apparition was real, how would it be impacting people today? With that, I began my investigation.

In a Remote Area
The story begins over 150 years ago in October 1859, when Mary appeared to a young woman named Adele Brise on three occasions. On the third occasion, and in the company of two other women, Adele received the message from Mary to pray for the conversion of sinners and to teach children about the faith. Adele was the only one of the three to see and hear the apparition, yet the other two women were also significantly impacted by the incident.

Upon hearing of the apparition, Adele's father built a small chapel in order to begin the work of fulfilling Mary's request. Champion, Wisconsin, is located in beautiful Door County–so named for being on a dangerous strait where Green Bay meets Lake Michigan, littered with shipwrecks and earning the appellation: "Death's Door."At the time, it was a very remote area–the nearest location for Mass for the Brise family was about 11 miles away and the need for the mission that Adele had been entrusted with was great. She set out to live the mission to teach children the faith and to admonish sinners. After awhile, other young women joined Adele and together they formed a community of Third Order (secular) Franciscans. The St. Mary's Boarding Academy was founded next to the chapel dedicated to Notre Dame de bon Secours (Our Lady of Good Help) on the apparition site.

While no miracles have been officially attributed to the apparitions, a devotion of a significant number of people to the Shrine was clearly established. And there are many noteworthy situations that are hard to explain and may be attributed to miracles in the future. One of the first recorded and a most remarkable case was the preservation of the shrine chapel and surrounding area from fire.

In 1871, a fire of great proportion was raging in northern Wisconsin. The fire later became known as the Peshtigo Fire, which consumed an area twice the size of Rhode Island and took over 800 lives and is now considered the worst fire in United States history. At the height of the fire, the devoted people of Our Lady of Good Help went to the chapel to pray for the fire to pass over them. With flames lapping at the village of Champion, the winds fueling the fire switched just in time, extinguishing the flames and preserving the village from certain destruction.

According to Fr. John Doerfler, Rector of the Shrine and the Vicar General and Chancellor of the Diocese, it is true that no new apparitions have been reported since the 3 apparitions experienced by Adele Brise 150 years ago. Yet, these events from years ago have touched many people's lives. In particular, they have brought people back to their faith, kindling within them the hope for eternal salvation.

An Impact on Life
One recent story reported in The Compass, the newspaper for the Green Bay Diocese, was about a miraculous healing. Joe Anderson, a 3-year-old boy, had been diagnosed with acute myelogenous leukemia on July 20, 2010. Patti Nguyen, who has been faithful to the shrine and the apparitions, knew that a miracle was possible, and she brought Joe, her sick grandchild, there in order to ask for Our Lady's intercession. The next day, when they visited the hospital for some further tests, they learned from Dr. Jon Brandt that no leukemia could be found in little Joe's body.

This exploration of the shrine at Champion has certainly impacted my own life as well. I have learned that while the apparitions of Adele Brise are true, the only way to experience them is through a more simple approach. I started off skeptical for no reason other than the thought that nothing this important could be in a locale so close–as if apparitions were possible only as long as they were far away and exotic. It was only through drawing closer to the proposal to visit the shrine that I was able to make a true judgment. And the judgment brought me closer to an event that impacts me today–and forward toward eternal salvation.