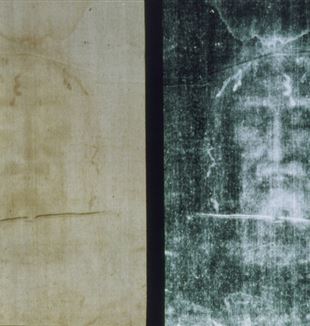 From April 10th, in Turin Cathedral, the cloth that, according to tradition, covered the body of Jesus will go on public exposition. How the image came to be formed on it remains a mystery, but there are many signs that allow us to identify the man crucified, because “they coincide perfectly with the Gospel accounts.” A biblical scholar tells us about it.

“Having bought a linen cloth, Joseph of Arimathea took Him down, wrapped Him in the linen cloth and laid him in a tomb that had been hewn out of the rock.” (Mk 15:46). In this concise phrase, the evangelist Mark describes Jesus’ burial. Matthew and Luke also mention the new sepulcher and the linen sheet (Mt 27:59; Lk 23:53). John seems to say something different: “They bound it with bands [Greek: othonia] along with the spices, according to the Jewish burial custom” (Jn 19:40). The word comes up again in the account of Peter and John’s visit to the empty tomb (20:3-9). Why did John use another Greek term, and moreover in the plural? In fact, this term is the equivalent to “sheet,” since amongst its various meanings we find “large cloth covering.” The plural is the result of an incorrect interpretation of the original Aramaic word: “a dual,” which meant: “a double cloth,” read as a plural. John probably used the word “dual” to describe in more detail the cloth that covered Jesus’ body. This corresponds exactly to the Shroud, the holy sheet of Turin, a double cloth.

In a few weeks’ time (April 10th–May 23rd), that sheet will be on display in Turin Cathedral, where it is kept. This exposition comes exactly 10 years after the last one, during the Jubilee Year. Pope Benedict XVI will come to Turin (May 2nd) to celebrate Mass in St. Charles’ Square and to pay homage to that sheet on which the image of a crucified man can be seen with the naked eye. The multidisciplinary scientific study that began in 1898, the year in which Secondo Pia discovered that the image on the sheet behaves like a photographic negative, indicates that what we have is not a painting, but a mark whose formation is still a mystery. Alongside the image, there are bloodstains scattered over the entire cloth. Scientists have discovered that it contains a high concentration of bile pigment, indicating that this person suffered atrocious torment, and that the stains are of two kinds: blood coming from the wounds of a living person, and blood coming from a dead body, like the mark of the side perforated by a Roman spear. As scientific studies have shown, this is the most striking archaeological proof of the penalty of crucifixion. But who is the victim?

Before seeking the answer to this question, we must draw a premise. Some of the signs of torture on the sheet are typical of any crucifixion, while others are exceptional, specific to this man, and these allow us to identify the victim. One of the most evident characteristics of this man is that He has been scourged, a punishment independent of the crucifixion, as the number of strokes (120) and their distribution over the body show clearly. Normally, the one to be crucified was scourged along the way, in order to weaken his body and shorten the agony of the cross. If this had been done with the man of the Shroud, the scourge marks would not be distributed all over the body. According to Jn 19:1 and Lk 23:25, Pilate ordered Jesus to be scourged as an alternative punishment to crucifixion, but the Jewish authorities were not satisfied with this and they asked for His death on the cross.

Another Detail
The head of this man was covered with a crown of thorns, not in the form of a ring, but that of a helmet, with the same shape as oriental crowns, since the wounds of the thorns are all over his head. Three evangelists agree in reporting that the soldiers, as they mocked Jesus, twisted a crown of thorns and put it on His head (Jn 19:2; Mk 15:17; Mt 27:29). The face of the man on the Shroud shows bruises, above all on the left cheek, resulting from a blow from a hard object. The evangelists refer to a servant of the High Priest who struck Jesus in order to punish Him for the way He had answered the supreme authority during the trial before the Sanhedrin (Mk 15:19; Jn 19:3). They used to break the legs of those crucified, to make them die more quickly, but the legs of this body are not broken. The man of the Shroud had his side pierced with a spear to ascertain his death, since the blood that came out of the heart is that of a dead man. John reports that Jesus’ side was pierced with a lance and that blood and water (serum) came out of the wound (Jn 19:32-34).

A Private Tomb
It is surprising, too, that this executed man was laid in a private tomb instead of being thrown into a common grave, and moreover he was wrapped in a costly linen shroud on which had been spread an ointment of aloes and myrrh. The Gospels report that Joseph of Arimathea and Nicodemus wrapped Jesus in a linen shroud and spread on it 100 pounds of these perfumes (Mk 15:42-46; Jn 19:38-40). Finally, it is astounding that the body wrapped in the Holy Shroud did not decompose; in fact, the sheet shows no sign of putrefaction.

Other details, though typical of any crucifixion, can help to identify the person in the Shroud. The back of the shoulders is covered with scratches left from carrying the cross. This “cross” was only the patibulum, the crosspiece, and normally weighed about 40kg (85 lbs). The wounds of the scourging on this part of the body are pressed down, but not torn open, despite the friction from the patibulum. The Gospels state that Jesus was made to carry the cross, but proved to be so weak after His torture that He was unable to carry it up to Calvary, and had to be helped by Simon of Cyrene (Mk 15:21). Moreover, Jesus walked to Calvary still dressed, so the shoulder wounds would not have been in direct contact with the cross. The blood of the man of the Holy Shroud shows that He died of dehydration, suffering a great thirst. In his Gospel, John describes the torture of thirst that Jesus underwent (Jn 19:28f).

These characteristics, and many others we do not mention, show clearly that the victim was Jesus. In his homily on May 24, 1998, in Turin Cathedral, John Paul II defined the Holy Shroud as a “mirror” of the Gospel accounts of Jesus’ passion and death. If the Holy Land is considered the “fifth Gospel,” then the Shroud must be considered the fifth account of the torture suffered by Jesus and, certainly, much more expressive than the short narratives transmitted in the early Christian writings. All the same, the meaning of all this suffering is explained only by the Church’s announcement. “In the immeasurable suffering it documents, the love of Him who ‘so loved the world that he gave his only begotten Son’ makes almost tangible and manifest its astounding dimensions. Before this, believers cannot but exclaim in all truth, ‘Lord, you could not have loved me more!’, and become at once aware that it is sin that is responsible for that suffering, the sins of every human being” (John Paul II).

Some studies, like The Shroud. The Return to Life by Giuseppe Catalano, and A Hundred Proofs of the Shroud by Giulio Fanti and Emanuela Marinelli, appeal to the Resurrection to explain the formation of the image; in fact, the Shroud is considered a proof of this fact.

Exceptional Clues
Jesus’ Resurrection is a unique event, whose true nature is expressed by the Church in these words: “On the third day He rose again in fulfillment of the Scriptures; He ascended into heaven and is seated at the right hand of the Father.” In other words, the Resurrection of Jesus does not mean a return to the life of this world, but His exaltation into the Father’s glory. It is an event that is situated in the next world, beyond the reach of man’s knowledge by means of his intellectual capacities alone. This event, therefore, happened to Jesus of Nazareth crucified, and it should be possible to make out some traces or signs on this corpse. The first Christian witnesses left reports of the disappearance of the body in the account of the finding of the empty tomb as the first clue to the Resurrection, since the Jewish enemies could not deny it–they tried to justify the fact by saying that it had be stolen by His disciples. In this sense, we can consider the Shroud an important clue, since it testifies to something exceptional–that the body wrapped in it did not decompose. It did not undergo the normal process of decomposition that every dead body undergoes. How can this phenomenon be explained? Only by accepting the disciples’ testimony that they saw Christ gloriously alive after His death.