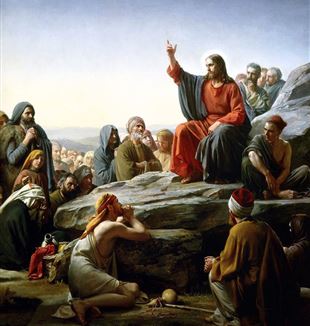 In the synoptic Gospels, Jesus’ preaching is developed by means of parables. This way of teaching is characteristic of Jesus, since in previous Judaic literature there is not even one parable but only two similes, made by the Rabbi Hillel around 20 BC: he compares the body to a statue and the soul to a guest. Only at the end of the 1st century AD do we find in that literature the first accounts with parables. Moreover, when compared with these accounts, Jesus’ parables stand out as much more lively and clear. As Joachim Jeremias affirms, “the parables are a fragment of the primordial rock of tradition” (J. Jeremias, The Parables of Jesus), which means that we are very close to Jesus Himself. After all, the literary genre of the parables is quite different from the fable, or story, very widespread in the Eastern, Grecian world. In the latter type of wisdom narrative, it is normal to attribute human characteristics to animals and plants, who are the main characters in the stories. The parables of Jesus are stories that describe situations and events of everyday life. In using the ordinary things of life, real situations, Jesus brings men to knowledge of the ultimate meaning, the truth of God and His behavior towards man. Benedict XVI affirms: “Through everyday events, he wants to show us the real ground of all things and thus the true direction we have to take in our day-to-day lives if we want to go the right way. He shows us God: not an abstract God, but the God who acts, who intervenes in our lives, and wants to take us by the hand” (pp.192-193).

A Disconcerting Affirmation
In his book Jesus of Nazareth, in the chapter dedicated to the study of the parables, Benedict XVI describes their nature and purpose. He basically uses the studies of Adolf Jülicher, Charles Harold Dodd and Joachim Jeremias. In discerning the purpose of the parables, the Pope’s attention is focused naturally on Mark 4:11ff, where the Evangelist collects some words of Jesus that introduce the explanation of the Parable of the Sower, in which he seems to offer the reason for which Jesus expresses Himself by means of parables. Let’s recall the passage: “And when he was alone, those present along with the Twelve questioned him about the parables. He answered them, ‘The mystery of the kingdom of God has been granted to you. But to those outside everything comes in parables, so that “they may look and see but not perceive, and hear and listen but not understand, in order that they may not be converted and be forgiven”’” (Mk 4:10-12).The Pope, quite rightly, introduces his reflections acknowledging that this is a strange saying: “But there is one vexed saying of Jesus concerning the parables that stands in the way.” In fact, these words of Jesus pose serious questions. The Pope poses the following questions in his book: “Is the point of the Lord’s parables to make his message inaccessible and to reserve it only for a small circle of elect souls for whom he interprets them himself? Is it that the parables are intended not to open doors, but to lock them? Is God partisan–does he want only an elite few, and not everyone?”(p. 189) According to what Jesus says, it seems that the purpose of the parables is to prevent these people from being converted and obtaining God’s forgiveness.

Failure
But should not the parables be a means for making Jesus’ teaching more understandable and effective? And don’t we find in the Gospels a continual call from Jesus to conversion, which implies His desire that all men, thanks to conversion of heart, should obtain God’s forgiveness?

As a true believer and a serious scholar, the Pope tries to give an explanation of these mysterious words of Jesus. In his opinion, with these words, Jesus sets Himself within the group of the Prophets, since they serve to affirm that His destiny is the same as that of the Prophets: the refusal by the people of the announcement He brings in the name of God–in other words, failure. “This failure of the Prophets is an obscure question mark hanging over the whole history of Israel, and in a certain way it constantly recurs in the history of humanity. Above all, it is also again and again the destiny of Jesus Christ: He ends up on the Cross. But that very Cross is the source of great fruitfulness” (pp. 189-190).The Pope’s explanation affirms something quite true and indicates that Jesus Himself saw His mission in the light of the Prophets, above all of Isaiah. All the same, the redaction as it comes down to us is still strange. In other words, there is no explaination of the origin of the disconcerting affirmation in Mark 4:11ff. Moreover, it is hard to accept the fact that Jesus was not able to express the awareness He had of His person and ministry in a clearer and more direct way. Let’s try therefore to explain how this Greek text came to be formed, so as to be able to make reasonable sense of these words of Jesus. As Jean Carmignac acutely observes, before interpreting any Gospel text from the theological point of view, we have to struggle to understand what it really wants to affirm. “Good theology presupposes good exegesis and good exegesis presupposes good philology; the solidity of the philological bases is an indispensable guarantee for the reconstruction of the exegetical and theological theories” (J. Carmignac, Recherches sur le Notre Père). In our opinion, in order to find an explanation for this quite unusual saying of Jesus, we need to look at the influence of the Aramaic language on the Greek text of the Gospels.

Let’s first recall that the last words of Jesus are a quotation from the Prophet Isaiah: “Go and say to this people: Listen carefully, but you shall not understand! Look intently, but you shall know nothing! You are to make the heart of this people sluggish, to dull their ears and close their eyes; else their eyes will see, their ears hear, their heart understand, and they will turn and be healed.”(6:10). Though it is not stated explicitly, it is probable that Mark’s final conjunction, “else” (hina) has the function of indicating the fulfillment of that prophecy. As is well known, the Evangelists, particularly Matthew, after narrating an episode, generally introduce a quotation from the Old Testament, preferably from the prophets, with these words: “So that what was foretold by the prophets be fulfilled…” In giving these quotations, the Evangelists want to present or describe a fact in the life of Jesus with words of the Holy Scriptures. The final conjunction with which Mark introduces the quotation of Isaiah, which in all probability is the result of the translation of an Aramaic conjunction from a rather wide range of meanings (“so that,” “in such a way that,” “because,” etc.), it could introduce the following affirmation: “In such a way that [the words of Isaiah be fulfilled] they may look but not perceive, and hear but not understand.” In this way, the Evangelist does not say that Jesus speaks in parables, in order that those outside for all their seeing may not see, nor for all their hearing may not understand, but rather that, with the preaching in parables, the words of Isaiah are fulfilled, which described the hardening of the heart of the people of God before the words of His prophets.

A Tentative Solution
To solve the second difficulty is more complicated. Certainly, Jesus’ intention–to stop outsiders from being converted and receiving forgiveness–is contrary to what we read in the Old Testament and to what we know of Jesus’ behavior. God seeks the conversion of the sinner with infinite patience. His desire is to grant pardon to the sinner. In order to understand, we first of all have to note that the words of Isaiah quoted here by Jesus are not the literal translation of the Hebrew original of the prophet, nor the exact copy of the Septuagint translation; Mark’s text depends on the Aramaic translation used in Palestine for synagogue worship, the Targum. In the Targum, the word that corresponds to “else” in this passage of Isaiah is dilemá. This conjunction does not mean only “else” but also “unless.” We should not be surprised at this: in all languages there are words, above all prepositions and conjunctions, which, when translated into other languages, should need more words, according to the context. So the Aramaic original, hidden behind Mark’s Greek, should be translated thus: “…if they do not convert and receive forgiveness.” It is not hard to see that in this way the hardness of the phrase has vanished. What Jesus wanted to say by quoting Isaiah is that the reason that some people, listening to His preaching, look but do not perceive, hear but do not understand, is that they have not answered His call with a sincere conversion; if they do convert, then they will see and understand.

This reading is confirmed by another fact that we have to keep in mind in order to approach Jesus’ way of speaking. The Hebrew word mashal and the Aramaic word matla can mean a short story, like those we call “parables,” but can also mean a proverb, a figurative account, a conundrum, or a puzzle. So “to speak by means of parables” can mean “to speak through puzzles,” or in an enigmatic language that is not understood. Therefore, Jesus’ opening words in Mark 4:10 must be interpreted as follows: “To you has been given the mystery of the kingdom of God; for outsiders, instead, it is all an enigma, incomprehensible language.” In this way, the two verses form what is called an “antithetic parallelism”–the two parts say the same thing, but one part is affirmative and the other negative. The first part says that the disciples have received knowledge of the mystery contained in Jesus’ preaching about the kingdom of God; the second part says that those outside see in the person of Jesus and in His preaching an enigma they do not understand. The only way for them to come to know Him or, better, for God to grant them this knowledge, as for the disciples, is that they be converted.

Let’s close our attempt to clarify this strange saying of Jesus with the complete translation of these two verses, in which, with the help of small glosses, we include all the linguistic explanations we have provided: “When He was alone, those who were with Him along with the Twelve questioned Him about the parables. And He told them: ‘To you it has been given, revealed [by God], the mystery of the kingdom of God; for those outside, instead, it is all an enigma, an incomprehensible language, in such a way that [here are the words of Isaiah] they see and hear, but do not understand, unless they convert and God forgives them.’” Jeremias comments: “To the disciples has been revealed the mystery of the kingdom present; for those outside, the words of Jesus remain obscure, because they have not recognized His mission and do not do penance. Thus is fulfilled for them the terrible prophecy of Isaiah 6:9 ff. All the same, a hope remains: ‘If they do penance, Gods will forgive them.’ The last look rests on the mercy of God, who forgives.”