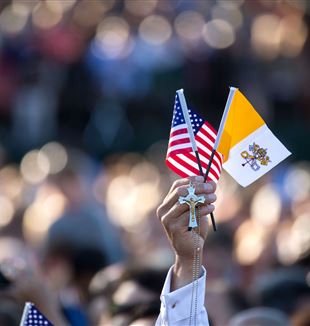 It is difficult for Europeans who have not spent significant time in the United States to appreciate the extent to which we are, broadly and sincerely, a very religious people. Without that awareness, the common American habit of invoking God in the public square might appear only to be a manipulative or cynical gesture, and the intervention in matters of public concern by religious leaders seems to represent a corruption of democratic politics and its domination by factions. But in the first instance there exists a simple fact: that our public discourse is a reflection of the centrality of religion in the lives of a great majority of Americans. Conversely, then, those who would attempt to excise expressions of religion from political life and to censor the public contributions of religious leaders are seeking to ignore and deny what is in fact the reality of many people’s lives, and the locus of meaning for them. There are many advocates of such an anti-humanist secularism in the United States, not only in Italy, but in my recent experience I have found the Italian version to be somewhat more prevalent and certainly more aggressively ideological in its hostility to religion. Even the strong anti-Catholicism present in much of American history has never until very recently been about an opposition to religion in general.

A Question of History
Still, while it is a necessary starting point, the religious character of American culture alone is not enough to understand the role of the Church in public dialogue in the United States. It is also a question of history, of law, of the distinctively American conception of the state, and ultimately of what it means to be reasonable.

Since its inception, our history has been repeatedly marked by the strong presence of religious experience in every significant public moment. Whether in the founding of the colonies by religious exiles, the leadership of Christians in the struggle for the abolition of slavery and the later movement for civil rights, or even the current debates over America’s role in the world, religious life has given meaning to and provided motives for Americans’ understanding of freedom, equality, responsibility, and the common good. It has helped give answer to the questions of what kind of a people we are and what we aspire to be, which every important public controversy presents at least implicitly.

Freedom of Religion
Our law respects and protects that central role that religion has played in our collective life. We have a capacious understanding of freedom of religion, which recognizes that an important part of the liberty of religious communities is the capacity to speak and act publicly on questions of common concern. At the same time, the dominant American notions of freedom of speech are substantially more unrestricted than the prevailing European ones. Much of our tolerance for the presence of religiously informed views on controversial social issues is the consequence of the idea that all speech is given space to be heard in the public square, even if it is unpopular or offensive to some others. This is especially important given the great pluralism of religious identity and commitment among Americans. It is not the role of the state to be the arbiter of what is acceptable as public discourse, and so the law protects the liberty of all to express their views–even, or perhaps especially, those whose views are informed by their religious convictions.

Here there is a close connection between American views of the place of religion in public and American views of the state. While the legacy of nineteenth-century constitutional theories in continental Europe emphasizes the monopoly of the state as the embodiment of the public interest, the United States belongs to a constitutional tradition much more inclined to see the state as a limited actor in the social fabric. From this side of the Atlantic, a Concordat appears to be a response to the need to establish certain protections for the Church against the state’s claim of exclusive and ultimate power and authority. But in a context such as ours, where the freedom of the Church is largely guaranteed by the structural limitations of the state to interfere in her affairs, a Concordat seems to be superfluous. To give a specific example: there is no need for a special agreement ensuring the right of the Church to establish its own educational system, because the state does not have a monopoly of power over education to begin with and so cannot prohibit the creation and operation of religiously affiliated schools.

Exchange of Ideas
While our understandings of freedom of religion or expression strongly favor an open and unrestricted exchange of ideas, to the extent that the role of religious groups in public debate is regulated or restricted in America, it is (perhaps surprisingly, for Europeans) largely played out in American tax law. Non-profit entities, including religious organizations, are exempt from taxation only so long as they are not engaged in partisan politics. Accordingly, churches and other religiously oriented groups are always careful not to take positions that advocate the selection of one party over another or one individual over another, and instead focus on the substantive principles and arguments at stake in issues of common social concern. This then has become the line of demarcation between generally accepted interventions by religious groups and improper ones.

Implicit in this distinction between inappropriate partisan politics and acceptable public intervention is a belief that religiously informed judgments on significant issues of public concern can be reasonable ones. That is, they are capable of proposing reasons to others, reasons that have the capacity to appeal to a common understanding of what is good for society as a whole and to persuade others of the truth of those claims. In America as in Europe, though perhaps less so, those who deny that religiously grounded perspectives properly address questions of common public concern are taking a more reductive view of the capacity of human reason. This is, in the end, the greatest thing at stake in the polemics over the Church’s participation in the democratic dialogue of the public square. To allow and defend that role is an affirmation of the broadest and most exalted understanding of reason’s capacity to grasp, propose, and adhere to the truth.