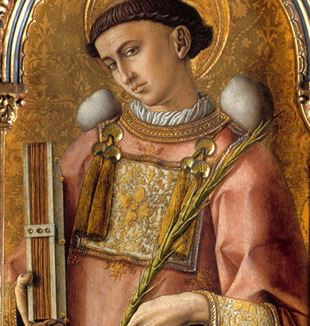 One of the experiences closest to the heart of Christians is that of “martyrdom.” However, following the French Revolution and the consequent rebellion, during the Romantic Age, the word and its content were totally distorted. People began to speak of “martyrs for freedom” or the fatherland or the revolution. The notion began to spread of the autarchic idea of the State and its cult, and “altars to the Fatherland” were built. All of this grew out of the secular mentality, often veined with neo-paganism, that achieved official status at the time of the French Revolution.

In recent history, another element has come in to divert the original Christian experience of “martyrdom” even more. I am speaking of all the people, brainwashed by totalitarian ideologies, who have offered themselves up as human bombs or kamikazes from World War II on.

A special case in point is Islam. Islam scholar M. Bormans writes, “The decisive affirmation of God’s transcendence constitutes the essential figure of the emblem of Islam, while it makes the Believer the ‘witness’ (s¹ãhid) of God’s universal Lordship, before making him, if necessary, a ‘martyr’ (s¹ãhid) (Q 112:1-4). In the Islamic world, we often find a global, and almost totalitarian, view of the relationships between the religious and the civilian.” An Arab scholar, Adel T. Koury, writes, “In Islam, already from the time of Mohammed, the obligation is indicated of believers to spread Islam, if necessary, even by means of war.”

Today, an extremist and violent interpretation exists of this “holy war” and the meaning of these “witnesses” connected with it, Muslims who go to their death in order to blow up military or civilian targets along with themselves, in a war that they call “holy” (gihãd). These suicidal volunteers are called “martyrs” of the Islamic faith. “My son Said has become a martyr. Here everyone admires and envies him,” the Corriere della Sera reported on December 2, 2003. In the words of these volunteers, who go voluntarily to their death under the banner of hatred, we find the will to destroy the enemy.
The Christian experience of martyrdom has nothing to do with this. Let us attempt to formulate some questions in order to understand this original experience better.

1. What is the meaning of the word “martyr”?
Testimony is the original meaning of the Greek word martyrion. It is the first word of the Acts of the trial of St Justin, a second-century martyr in Rome, along with his friends and disciples, during the persecution under Marcus Aurelius, the emperor who was a Stoic philosopher . The Acts focus much more on the testimony of living faith that these martyrs offered than on the description of their torture.

The term martyr thus indicates witness that reaches the point of shedding blood because of one’s faith in Christ. The early Church lived in awareness that being Christian brought with it the possibility of participating physically in Christ’s Passion. In fact, in numerous cases, Baptism with water was consummated also through a Baptism with blood, and at times this took the place of Baptism with water, in the case of people martyred while still catechumens (those who were preparing to be Baptized).

2. What is Christian martyrdom and what specifically distinguishes it?
The Catechism of the Catholic Church states (§ 2473) that “Martyrdom is the supreme witness given to the truth of the faith: it means bearing witness even unto death.” This definition takes up again the one given by Pope Benedict XIV, considered the most precise expression of Christian doctrine on martyrdom: “Martyrdom is death voluntarily accepted because of Christian faith or the exercise of one of the virtues that has to do with faith.”

3. What are the constituent elements of Christian martyrdom?
Vatican II describes the fundamental elements in these words: “The Church considers martyrdom as an exceptional gift and as the fullest proof of love. By martyrdom a disciple is transformed into an image of his Master by freely accepting death for the salvation of the world—as well as his conformity to Christ in the shedding of his blood” (Lumen Gentium, 42). This is why the Church has made memory of martyrs from the very beginning of her history as an acknowledgment of Christ’s continuing Presence in human experience. The canonization of martyrs is thus not a raising of monuments to old and honored heroes, but the confession of this Presence; it is making memory of the Christian’s essential vocation.

St Augustine (Enarrationes in Ps 34) says that it is not the punishment of death undergone, but the reason for it, that makes a Christian a martyr. If torment were what made a person a martyr, then all places of forced labor—mines, prisons—would be full of martyrs, and all those who fall victim to the sword would be martyrs. The Christian martyr does not die for an ideology or some values. He dies for the Person of Christ living in His Church.

In the tradition of the Church, there are two elements of martyrdom, always present simultaneously: public witness to Christ and death voluntarily accepted to confirm this. The object of witness is not just any cause, but only that undergone in order to testify to what we confess in the Creed, and thus it embraces all expressions of faith.

4. What does the Church require for the recognition or canonization of a martyr?
The juridical elements of martyrdom have been settled traditionally ever since ancient times. These elements are: the persecutor and the martyr (personal elements); death (material element); death voluntarily accepted, but not sought, and the continuing forbearance of persecution and violence by the martyr (moral element); the persecutor’s hatred of the Christian faith and the martyr’s love of and loyalty to Christ (formal elements or causes).

Therefore the criteria required by the Church for the canonization of martyrs are very precise:
- that the martyrs were killed out of hatred of the faith;
- that they voluntarily accepted death out of love for God, Christ, the Christian faith, or confessed Christian virtues (for example, virginity);
- that their violent death be testified by witnesses or reliable documents.