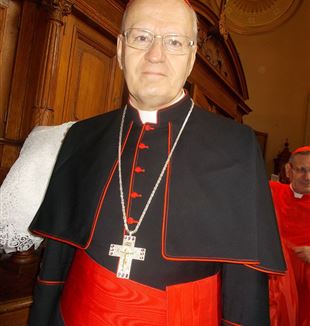 When Cardinal Péter Erdö gave his address in the Catholic University in Milan some weeks ago, the older professors recalled a precedent. In 1978, a young cardinal passed through the same Aula Magna in Largo Gemelli, Karol Wojtyla. There was the same impression of polite power, the same fascination for the students. Erdö, 51 years old, is the youngest cardinal in the college. He is the Archbishop of Esztergom-Budapest, and he belongs to that brilliant cluster of bishops with culture and charism on which Pope Wojtyla’s hope for the future is based.

Erdö has written about two hundred essays on Canon Law and more than twenty books. He speaks ten languages, and his Italian is perfect.

Your Eminence, these are times of war. Our time is characterized by fear—the Pope said as much to the diplomatic corps. Should we be afraid? What are you afraid of yourself?
In Hungary, people do not fear terrorism and the limitations linked to its necessary prevention as much as you do. They are not shocked at the controls. They were used to being controlled much more rigorously! I don’t know if you know what Communism was…. If anything, what we are afraid of is the lack of order. The empty shell of police checks has been broken and revealed the absence of public and private morality. There is indignation, yes, but at the weakness of public order.

Perhaps there is a little nostalgia, even for you?
Nostalgia for those times? No, not at all; and for me least of all. I often say, “Formerly, it was more difficult to be Christians; now, it is more complicated.” Earlier you mentioned fear, and referred this diagnosis to the Pope. It’s true. The Pope, however, contrasted fear with hope. Fear is fought with hope. And he sustained that the opposite of hope is not fear, but despair. Despair is when man gives in to nothingness. This is the decisive evil of our time. In a certain sense, then, fear is useful. It points to the horror vacui, the fear of nothingness, which comes over us even when there are no external motives. When the backbone of the external structures that people feared collapses—and I’m thinking of Communism—everything seems empty and devoid of value. It’s the much-quoted “lack of values.” If there is no justice, no tension to the ideal, society can collapse into disorder and criminality. This is why, today, politicians, even non-believers, seek the support of the historical Churches for the re-birth of national institutions, of culture and the moral structure of society. In Romania, they are building a thousand churches at the cost of the State. In Russia, the old and much-persecuted Orthodox Church is supported in many ways by the public authorities, even by non-believers.

You are speaking mainly of Eastern Europe. But you know the West well, too.
It’s worse in the West. Here there is nausea, boredom, even as regards the Church. In our countries, they tried to destroy the Church through violence; for you, there has been a kind of progressive interior demolition. Structures that are too big have been occupied by bureaucratic power groups or aimed more at social concerns rather than moved by faith.

How can this crisis be overcome?
The person of Jesus Christ! The religious, personal, and immediate relationship with Christ. The Church exists for this. Without this, even the call to values, which all the politicians are speaking of in order to face the challenges, including that of terrorism, is ineffectual. It’s difficult to support values without an organic view of the world, without religious foundations. We witness this paradox. The authorities ask for values, but then those who practice them are treated with a certain mistrust. I am thinking of the judgments given by the Church on the questions of bioethics, drugs, abortion and other themes. Those who take them up are treated at times as mentally unstable or obscurantist. In the East, Christians are used to being non-conformists, so perhaps lack of social recognition doesn’t scare us much. And yet this scandal seems to be necessary. Even non-believers need it.

But there is a return to religiosity…
This is true, but Christianity is not a form of religious sentimentalism. It has objective contents and truths, and these contents can be learned. The teaching of religion has come back in various forms even in my country’s schools. We have to go back to the methods of the primitive Church, in which catechesis is fundamental. The fact that we are few should not discourage us too much. I think it is significant that in Budapest, in addition to 6,000 infant baptisms, each year, there are 500 adult baptisms. This is a sign of growth in the missionary character of our Church. What God wants. And in the West, too, you need to take up the Old Testament where it says, “Tell it to your children!”

What should we tell our children?
The contents of the Good News, your own religious experience—not the solemn experience, but that of every day, that passes through the family. I was born in 1952. My father was a jurist, but he couldn’t practice his profession because he was a Catholic. I am the eldest of six children. A group of families (a movement with no name) practiced the simplicity of Christianity. There were young women who couldn’t become religious because of the State ban, but they chose virginity. They would work, keep the minimum necessary from their salary, and give the rest to help families with many children. This is the kind of experience I mean. This can and must remain, despite the changing times.

There is a big question. How can a liberal State accept the limits of personal freedom, laws that go against the use of drugs, birth control methods, or that protect the institution of the family, etc. You are a jurist…
I am well aware of this criticism of the Church and the Pope. The question is important, but there is not so much criticism. The Pope preaches these teachings with Christ, as witness and conviction. He does not care about the opinion of the majority—after all, the Christians in the East are used to being in the minority. But I believe that a healthy human mentality still exists, even though there has been a progressive conceptual erosion of law. We have to go back to the illuminist origins of the codification of European law. There were values ascribed to human reason and religion, not only out of historical debt, but with philosophical reasons. It has always been clear that the right to individual freedom is decisive. But if you don’t want the State to fall apart, it is inevitable that there must be limits to subjectivism. September 11th saw the affirmation of “zero tolerance.” Society must continually lay down rules if it wants to survive. As a consequence of original sin, human nature is wounded and weak; it doesn’t always see clearly what is needed for survival. As well as human reason, the light of Revelation is needed. This is why what the Pope says about where the road to true life lies is precious.

A curiosity. Is it true that you have found a novel way of financing your parishes?
I know what you’re referring to. The buildings for worship have survived, but we don’t know how to maintain them. In the past, the basis for their maintenance was often an obligation of the local authority. This was cancelled over fifty years ago. The other goods of the Church were confiscated at the beginning of the Communist era. There has been no re-privatization, but thanks to a constitutional law, and an accord reached with the Holy See in 1997, we receive State financing for our “public service” works and for the schools. However, the economic aspect of our life is not our main concern. We are poor. In order to find money for the restoration of the buildings we have to go around almost like beggars, and I, too… In many of the churches, especially in the towns, we have built underground crypts that are transformed into cemeteries. The Christians of old times did so, too, and we follow their example in this… However, the economic aspect is not our main concern. I would like to go back to something I already said, and I say it humbly, “The religious, personal, and immediate relationship with Jesus Christ: we are for this, we are beggars for this.”