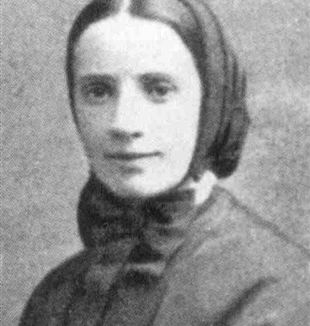 According to Pietro Di Donato, author of Immigrant Saint: The Life of Mother Cabrini (New York, St Martin’s Press, 1991), a strange, “swiftly moving cloud of white” appeared above the Lombard plain as Agostino Cabrini, the saint’s father, waited for his wife, Stella, who was then 52, to deliver their last child. The white cloud turned out to be a prophetic flock of white doves that circled their home and courtyard minutes before a midwife called out that his wife had delivered a baby girl. Quite a formidable omen, this flock of doves, given the fact that nine of the Cabrini children had died, and this one–baptized Francesca Maria Cabrini on July 15, 1850–seemed as frail and as destined to a premature grave as all the others. Yet that was not to be the case, since the last child born to Agostino and Stella Cabrini was to become one of the Church’s prominent modern missionary saints.

Yearning for Missions
Regarding Francesca Cabrini’s early life, we know that her older sister Rosa, the village schoolmistress, was responsible for her early education, and that due to Francesca’s characteristic frailty, she was often too ill to attend her lessons. The isolation that resulted from this, however, brought about a rich imaginative life within her. Francesca was endowed with a natural curiosity for learning, and loved the artistic heritage of her native Lombardy. It was her maternal uncle, a priest, who enkindled in her at an early age a fascination with the Chinese missions and who instructed her to direct all of her pressing questions about good and evil, and about the state of the world, to Jesus Himself. From a very early age, Francesca expressed the desire to be a missionary in China.

At the age of 18, she passed her final exams with honors and became a licensed schoolteacher. At this time, she requested to enter a local religious order, the Daughters of the Sacred Heart. Due to her physical weakness, however, the Mother Superior felt that the life of their order would be too arduous for her and sent her on her way, advising her not to be discouraged because Christ would ultimately show her the purpose He had for her. Later on, upon the death of her father, she attempted to re-enter both this order and the Conossian Sisters, and was again rejected by both houses.

While teaching school in a parish, Don Serrati, the pastor, was struggling to maintain an orphanage there with the assistance of a woman by the name of Antonia Tondini and her friends. They treated the orphans disgracefully. In order to mitigate this, Serrati attempted to give these women a religious rule, to live as lay sisters. He invited Francesca Cabrini to assist him because of her widespread reputation of being gifted with children. In spite of harassment from Tondini and her cohorts, Francesca’s affection for the orphaned girls won out, and she remained there, uniting the abuse she received to Christ’s passion.

The Missionary Sisters of the Sacred Heart
Shortly after this, with the election of Pope Leo XIII, the first “modern” pope, whose strong convictions would move the Church forward in addressing the moral problems of the modern age, the local bishop dissolved the House of Providence and excommunicated the “unholy sisters”-meaning Tondini and her cohorts, who had so long been the source of Mother Cabrini’s abuse. He instructed Cabrini to found an institute of missionary sisters on her own, separate from the previous order. On November 12, 1880, she and her young sisters left for the town of Codogno, where they began an official religious house. In the words of Di Donato: “She knew that love not loved and lived was but a dead word. Her daughters would seek identity in the Sacred Heart, and by passionately longing for Christ, become their true selves.”

The first school and orphanage she founded gradually became more famous. Soon, other districts were requesting her to open houses. By 1887, when Cabrini was 37, there were seven of these and, at this point, she requested that Serrati allow her to ask for permission to establish her institute in Rome and obtain approval for a foreign mission.

Not East, but West
On September 24, 1887, she headed to Rome, where she had to undergo a series of arduous trials among the Church hierarchy in order to be heard. When she finally obtained an audience with Pope Leo XIII, he told her, “Not East, but West, my child.” Roughly one year later, Bishop Giovanni Scalabrini, of Piacenza, himself concerned with the damage the New World was propagating among the souls of his beloved Italian emigrants, requested that she head to the United States to assist the Congregation of Saint Charles Borromeo–an order of missionary priests he had founded.

Cabrini had not thought of America as a place of mission, but when Bishop Scalabrini boasted of her work to Bishop Corrigan of New York, he too requested that she head across the Atlantic to assist with Italian orphanages in New York, and so she embarked on her journey there. After many complications, Mother Cabrini visited the bishop with her sisters, and he instructed her that she should open an orphanage in Little Italy when she found the proper house. Since he himself found no possibilities for this, he suggested they return to Italy. Mother Cabrini responded by telling him that it had been the Holy Father himself who had sent them, and so they would remain, and she went on to present him with a list of her credentials. He, in turn, presented these credentials to the New York Sisters of Charity and asked these sisters to provide shelter for Cabrini and her sisters. They began by teaching catechism, and eventually Mother Cabrini’s tact (many referred to her as Europe’s finest statesman) secured the nuns a house for their first orphanage.

It seemed that once the Lord’s will had grown clear to her, her physical smallness and frailty were not an issue; rather, the fact that she had been given a task rendered her all the more determined to forge ahead, even in the midst of difficulty, and by January of 1918, she had over two hundred and fifty children in her New York day school, after having returned to Italy that year and come back with seven more sisters to help her.

One example of her fortitude, which was based not on her own strength but on the confidence that Jesus Himself was prompting her to do what she did, occurred during the above-mentioned trip. Her ship met a storm of such proportions that it had been forced to dock for repairs in the north Atlantic among icebergs. Here, her faith in the providence of God and the confidence with which she confronted the storm and the possibility of disaster earned her the name “The Good Sailor” from the ship’s crew.

In a short while, a group of sisters, accompanied by Mother Cabrini herself, left for Nicaragua, and again their ship encountered such fierce storms that the captain confided his worries to Cabrini. In order to maintain her footing, she remained on the ship saloon’s floor, holding onto a settee, and called out loud encouragements to the passengers, returning to her cabin to pray after a time. The captain, having witnessed her faith, steered straight for the open sea. When the danger had passed, the passengers organized a concert, begun by the sisters, who sang two hymns they had written. The passengers were duly impressed, and this was, for many of them–(rich Protestant businessmen, unacquainted with Roman Catholicism), their first exposure to the joy of a new humanity in Christ.

In 1892, Mother Cabrini traveled to New Orleans. Once there, she learned that eleven Sicilians had been lynched the year before by a mob due to an ambiguous accusation against them. Her indignation at this, and the prompting of Archbishop Janssens, who asked her to establish a convent in the city, caused her to send two sisters there two months later, thus initiating a second mission.

Faithful to the End
Back in New York, Bishop Scalabrini had asked certain religious to found an Italian hospital to care for the immigrants, and these women unfortunately had to return to Italy. Mother Cabrini hesitated in taking over. One evening, she encountered an illiterate Italian man who asked her to read a letter to him. (The letter had announced his mother’s death four months prior.) This, along with a dream she had of Our Lady, in rolled-up sleeves, making beds for these people and telling her, “I am doing what you don’t want to do,” convinced her to take over the hospital.

Within a year, she had let the authorities know that she could not be expected to run the hospital for nothing, liquidate a large debt, and pay interest on it in the meantime. She was told to leave the hospital in ten days but, tenaciously, she told them to allow her to start a new one on her own. She thus removed fifteen patients who were dying and placed them in public hospitals, and filled two houses with ten others, who had refused to leave the sisters. Columbus Hospital was founded, and was widely criticized for its lack of gas and water. Food had to be transported there and heated, until finally the New York State Senate provided a $7,000 gift. Soon, doctors began to assist there for free. All this led to the archbishop’s placement of a new school entirely into her care–one that was to serve numerous Italian children who had been attending a Protestant school.

Mother Cabrini died on December 22, 1917, succumbing to a lung ailment she had been prone to since childhood and which had left her in a state of constant physical weakness. She was canonized on July 7, 1946. Her life is perhaps one of the most salient examples of how it is upon our desire and our natural character that Christ builds in order to communicate Himself to the world. One also recalls St Therèse of Lisieux, and how both her physical weakness and her passion became the particular things the Lord used to reveal Himself through her life.