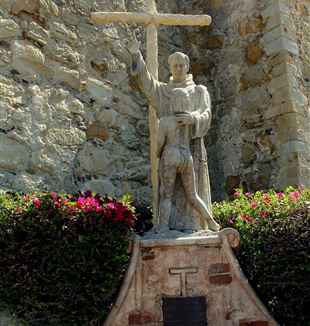 Miguel José Serra was born and baptized on November 24, 1713, in the small town of Petra on the island of Mallorca, Spain. Though small for his age and somewhat sickly, as a boy he was filled with grand aspirations. The young José had developed an interest in reading the lives of the saints, fascinated in particular by the descriptions of St Francis of Assisi. At the age of fifteen, José left home to enter the Franciscan University in nearby Palma to study philosophy. When Serra was seventeen, his intelligence and maturity permitted him to be admitted into the Franciscan Order, in spite of concerns on the part of his superiors about his apparent ill health. Upon assuming the habit of St Francis, he took the name Junípero (which means “Jester of God,” his namesake being the real-life companion of St Francis). In 1737, he was ordained a priest, and taught theology for seven years at Llullian University of Mallorca. Though he received great acclaim as a professor, Serra was not content with an ordinary academic career. He was imbued with the zeal to visit other lands, so common to Mallorcans like him, who had been seafarers and cartographers for centuries, and indeed common to many Spaniards of Serra’s own time who wished to sail to the far-off “Indies” (as the Americas were commonly called). In addition, he could not forget the heroic tales of the saints that he read as a young man. Hence, Serra’s dream did not involve discovering wealth or gaining fame as a soldier, but rather announcing the Christian event to those who had not yet encountered it. He was aware, however, that the first disciples had been sent by Christ in teams of two, and so for many months Serra prayed that God would send him a companion.

In 1749, his dream became reality, when he met another Franciscan of his province who wished to become a missionary in the Americas. His name was Francisco Palou, who would accompany Fr Serra on many of his journeys and eventually become the author of his posthumous biography.

The journey to Spain’s overseas territories was an arduous one. When Friar Junipero finally landed in Vera Cruz, accompanied by some 20 other friars, he traveled on foot to Mexico City to begin his work, while his other companions went on horseback. (On that journey, Serra’s leg became swollen from a mosquito bite. This would physically hinder him for the rest of his life, especially in walking.)

When he arrived in Mexico City, he studied and prepared for missionary work at the College of San Fernando. Not long afterwards, he began missionary work with other Franciscan friars in Mexico’s Sierra Gorda Mountains, where he preached to the native populations and founded new missions in territories that had earlier been extremely hostile to the Christian faith. While he was there, he earned the respect of his superiors and was named ‘Presidente’ of the missions of the region. Serra then returned to San Fernando College in 1758, where he once again took up the mantle of professor and taught philosophy for nine years until receiving another call to the missions, in what was considered at that time to be the farthest reaches of the world: Baja California.

The Establishment of the Missions
Beginning with the foundation of the Mission of Our Lady of Loreto in Southern Baja California in 1697, the Jesuit missionaries had established 17 beautiful missions on the entire peninsula during the first 100 years of evangelization in California. When, however, the Jesuits were expelled from all Spanish dominions in 1767, due to the effects of Masonic intrigues in the Spanish Court, the Franciscans took up the task. With Serra having been named President of the mission system, they took control of the old Jesuit missions on the peninsula that had been vacated, and from there prepared the great missionary enterprise of New California. The starting point was Loreto, in Southern Baja California, but as a bridge between North and South they founded San Fernando de Velacarta in the northern part of the peninsula in 1768, establishing strong ties with the native populations of that region. From San Fernando, with the support of Old California (today’s Baja California, Mexico)–of colonists, soldiers, provisions, seeds, livestock, etc-Serra and his companions struck northward, going on to found the first mission in New California (what is today the State of California) at San Diego de Alcalá on July 1, 1769. Serra’s motto: “Siempre adelante”–“Always forward”–would be borne out in the subsequent years through the founding of many other missions.

Though pleased to have founded the first mission in Upper California, Serra and his brother Franciscans wished to establish a base at the fabled port of Monterey, south of San Francisco Bay. Though Monterey Bay was known to exist from Spanish explorations in the early 1600’s, in more recent times, navigators had been unsuccessful in finding it. Serra nevertheless undertook the journey on a vessel named the “St Anthony,” in search of the legendary bay, and after a month of arduous sailing from San Diego, finally arrived at what he called “a pleasing stretch of land.” There, at Monterey, he founded his second mission, San Carlos Borromeo del Río Carmelo (St Charles Borromeo by the Carmel River). While Friar Junípero would eventually found a total of seven missions in his lifetime, this mission became the headquarters of all the missions in California and served as his residence when he was not traveling and evangelizing the indigenous peoples. The missions that would be established all along the California coast would be modeled on the one founded at Monterey.

An Education to Totality
The missions that Serra established were focal points designed for the integral Christian education of the Native American inhabitants. In the center was the church, around which revolved the life of the entire community. Christian education, moreover, was not limited to learning doctrine. The church was surrounded by classrooms, stables, liveries, grain mills, warehouses and workshops carrying out the different functions of the time, such as blacksmithing, tile making, tanning, and olive oil and wine production. Around this there arose a prosperous agriculture that took the native populations out of their ancestral poverty, such as the livestock raising that gave rise to the famous California ranchos. All of the seeds brought from the Mediterranean world adapted to California, in many cases with notorious advantages, and admirable fruit orchards were developed. The missions were a wholly self-sustaining enterprise, around which a new civilization developed.

The main protagonists of this civilizing work were the Indians themselves. They, together with thousands of colonists brought from Baja California and Sonora, were the ones who built the roads, the presidios, the ports, and the missions. The beautiful cathedrals of adobe that gave the “California Mission Style” so much fame in the world were the fruit of the work of an entire people. In their building, the natives learned the most advanced architecture of those times, improving it with their innate artistic sensibility. And more than that, the experience of the temple, “sign of the nearness of God to man,” opened to the California native a new horizon in his relationship with God. The native peoples that inhabited the missions also learned from the friars to play instruments, read music, and sing, creating original compositions that combined European melodies with their own ancestral musical tradition.

With the help of his Franciscan brothers, Junípero Serra established and supported a system of missions that would root the Christian faith in what would eventually become one of the most prosperous regions in the world. Serra died in 1784 of tuberculosis at Mission San Carlos at the age of 71 years. His grave has never been moved and lies today in the front altar of the San Carlos Mission Basilica. For generations after his death, the Native Americans of the Monterey area would collect acorns that fell from the oak tree where Friar Junípero celebrated his first Mass.

Serra’s companions carried on the work entrusted to them, increasing the number of missions in California to 23 by 1823, the year of the foundation of the last mission in California. The success of the mission enterprise was a wonder to the world, and could not help but inspire jealousy in some quarters. In 1834, the Mexican government, having recently won its independence from Spain, secularized all the missions, expelling the Franciscans and turning the rich agricultural terrains over to wealthy landowners. In subsequent years, the mission buildings eventually fell into disrepair and often ruin. By 1850, however, Mexico had lost the territories of Upper California to the United States, and during the course of the 19th century, some of the mission buildings were returned to the Catholic Church, and are still active today as functioning parishes, while others remained in the hands of the state and are maintained by California Department of Parks and Recreation as historical landmarks, still marvelous to see as a testament to the wonder and enthusiasm that was capable of transmitting a new culture.

Late in his life, in conversation with his lifelong friend Francisco Palou, Junípero Serra would have this to say about the enthusiasm that overtook him during his years as a professor in Mallorca, an enthusiasm which would be the impetus for the establishment of the great mission system in California: “It has been for no other reason than to rekindle in my heart those great desires that I had since the novitiate reading the lives of the saints… but let us give many thanks to God who is beginning to fulfill my desires and let us ask Him that it be for His greater glory and the conversion of souls.”