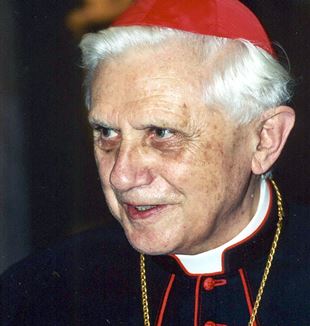 “Whatever is divine is effortless.” Aeschylus’s words, quoted by Msgr. Gianfranco Ravasi, define and sum up very well the significance of the symposium held April 2nd by Edizioni San Paolo and the Fondazione Sant’Ambrogio Museo Diocesano in Milan to present the Italian edition of the book by Joseph Ratzinger, Introduzione allo spirito della liturgia [Introduction to the Spirit of the Liturgy]. Whatever is divine is effortless, that is to say, it is a gift, and this is true especially for the liturgy, in which “it is God Himself Who acts, Who accomplishes the essential.”

Cardinal Ratzinger has been insisting on these themes for some years now, criticizing some erroneous interpretations and distortions that have come about in the application of the liturgical reform after Vatican II. Speaking at the symposium in Milan, the custodian of Catholic orthodoxy, however, took care to clear up any misunderstanding: “I did not write this book in order to propose more reforms, more changes. It is rather a viewpoint for understanding what the liturgy is, because there is no doing if there is not first being. Therefore my desire is not to provoke action, but above all to cause people to think.”

Cardinal Ratzinger then offered in succinct phrases the synthesis of his work, which deserves reading, rereading, and meditation. “Encountering Christ,” he explained, “means also encountering the totality of His nature and all of being. For this reason, Christian liturgy is never limited to mere activities of worship.” The Cardinal thus spoke of symbols and recalled the importance for the early Christians of praying facing East. The altars of churches always used to be turned toward the East (and not toward the “wall”). “We can turn toward the East, toward God who comes, and speak with Him,” Ratzinger said, “only because He has begun to speak with us, only because He has revealed Himself to us with a face. It is God Who came down, not we who struggled to rise. The rising sun is the symbol of God Who entered history and indicates to us the dimension of both creation and eschatology.”

A misunderstood term
The Prefect of the Congregation for the Doctrine of the Faith then turned to explaining precisely the meaning of the “sacrifice” of the Mass. After the Council the term fell somewhat into disuse and was replaced prevalently by “supper.” The idea of a sacrifice offered to God, which goes back to the tradition of the most ancient religions, is today branded as “magic” by a number of theologians and liturgists. Ratzinger admitted that the term and concept are open to misunderstanding, and tried to explain the true significance of the “sacrifice” of the Mass. “It is a gesture of hope and desire, of renewal and expiation, which was made new by Christianity. God has no need of the blood of our oxen or lambs; He has no need of victims. It is ridiculous to think that we can offer a gift to God. Nor can sacrifice be a gesture of destruction. God does not want to make us suffer. So what, then, is sacrifice? The only gift God expects is our freedom, i.e., the only thing that is not yet His, that does not belong to Him. The only true sacrifice can be our own, the transformation of my being and the world into love.”

“Only in this way,” Ratzinger went on, “are we in the heart of the New Testament, because Christ’s death is not a destruction or a glorification of suffering, but is an extreme gesture of love by which Christ gives Himself and with His arms draws us toward the Father, enabling us to say our free yes to the Father. Christ on the cross has His arms open wide to draw everyone to the Father, and in this way the sacrifice becomes a true one.”

The action of God
In his book, the Cardinal devotes some beautiful paragraphs to this topic: “During the solemn Eucharistic prayer,” Ratzinger writes, “it happens that actio umana (as exercised up to now by the priests of the various religions) moves into the background and makes way for the actio divina, the action of God…. This acting of God, which comes about through the words said by a man, is the true ‘action’ which all of creation awaits: the elements of the earth are trans-substantiated, ripped, so to speak, out of their moorings as created things, re-comprehended in the most profound foundation of their being, and transformed into the Body and Blood of the Lord.” “Whoever has understood this,” the Cardinal continues in his book, “easily understands that now it is not a question of watching the priest or of looking at him, but of together looking at the Lord and going to meet Him. The almost theatrical appearance of various actors, which happens sometimes today especially in the preparation of the offerings, very simply side-steps the essential. If individual exterior actions (which by themselves are not very numerous and are artificially inflated in number) become the essential thing in the liturgy and the liturgy degenerates into a generic acting, then the true theodrama of the liturgy is misunderstood, and the liturgy is reduced to a parody. True liturgical education cannot consist in the learning and the practice of exterior activities, but in the introduction into the essential actio, which the liturgy does, i.e., in the introduction to the transforming power of God, who through the liturgical event wants to transform both us and the world. In this respect, the liturgical education of priests and laypersons today is lacunar to a very sad degree.”

Liturgy and life
During the April symposium, the Cardinal emphasized that Christian liturgy “invites us to continue the act of worship in our lives.” “This,” Ratzinger explained, “is not moralism, it is not struggling to do something ourselves, but is opening ourselves up to the eschatological path of the liturgy, accepting it as the point of departure for our journey toward the goal, toward the future. The Word made Flesh offers Himself to us in His Body and His Blood, thus bodily, albeit in the new corporealness of the Risen One, which however still remains true corporealness, and thus offers Himself to us in the material signs of the bread and wine. This means that we are directly drawn in by the Logos right in our own body, in our bodily everyday existence. In fact, precisely because the true liturgical “action” is God’s acting, the liturgy of the faith always goes beyond the act of worship to impact all of daily life, which in turn must become ‘liturgical,’ a service to change the world.”
The process of entering into the spirit of the liturgy with the authoritative guidance of Ratzinger makes us understand immediately how much and what kind of respect and attention a Christian should have in his approach to the great treasure of liturgical tradition. It helps us to tell what is essential from what is not. It helps us to recognize the action of God Who comes to meet us and touches us even in the midst of inadequate songs, passing fashions, useless actions all bundled up together, lengthy explanations, and creative innovations which unfortunately distinguish many celebrations.