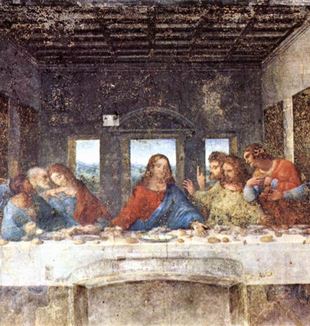 Dear brothers in the priesthood, dear ordination candidates, dear brothers and sisters, in this hour of our concelebration, two feasts of the Church coincide, which help us to better understand the reality, the event of this day: the feast-day of the precursor of the Lord, John the Baptist, and the great Eucharistic feast of the Church, Corpus Domini.

Saint John called himself a “voice,” a voice calling to repentance, to conversion, a voice that invites its listeners to prepare a path on which Christ, the King and Savior, can enter. The fathers of the Church united this self-definition of the precursor as voice with the most profound title given to Christ, which appears in the fourth Gospel: Christ–St. John the Evangelist tells us–is the Logos, the Word, the creative self-expression of the Father. Christ is the Word and St. John is the voice that serves to make it heard, accessible, so that this eternal Word made flesh can be present in our world. We can say that St. John, being the voice for this Word, lives a life of service, a life not for himself, but a life of self-giving, a life of giving himself for something else.

St. John is the voice of the Word. Reflecting on this connection between voice and Word, we can understand, as a first point, that being in service, the life of a deacon, is not something transient, it is not a simply temporary moment of life, of the sacrament of ordination: it is a permanent dimension, just as it is for priests, for bishops, for the pope, because Christ himself remained a deacon, and St. John, his precursor, was completely a voice for something else; he did not live for himself, but for something else.

Being in service, being a servant, being a deacon is a fundamental dimension of the sacrament of ordination, and you who are ordained today enter thus into profound communion with the story of Christ, prefigured and lived before Him by the precursor. John is a voice, he is a deacon, he is in the service of Another. Thus we can understand that the ministry of the Word is not only the function of preaching, the function of catechism, of religious dialogue, etc.; it is not only a function, but an existential and essential reality in the life of a deacon, of a priest. We can be a voice for the Word only if our voice is permeated by the Word, if we live in the Word. The Greek fathers said that our existence must be an existence for the Word and of the Word. In other terms, the words that we can say are convincing only if our life is the Word, is nourished by the Word, lives by the Word.

Reclining on his breast
Thus our minds go to the very moving story of the Last Supper, where St. John the Evangelist informs us that the beloved disciple was leaning on the Lord’s breast. Saying this reminds us of the beginning of his Gospel, where it says that the Son is close to the Father’s heart; He leans on the Father’s breast and thus He shows us the Father. Being in the service of the Word presupposes being in this profound relationship with Him who is the Word, leaning on the Son’s breast as He leans on the Father’s breast, drinking the Word from his heart, living near his heart, and from it to drink the Word of life. St. Paul tells us the same things in other terms, saying that we must enter into Christ’s feelings. What are Christ’s feelings? St. Paul answers: He humbled Himself even unto the cross. And precisely by humbling Himself, He overcame Adam’s pride, the pride that destroyed humankind. In the humility of this descent unto death He transformed human misery; by losing Himself, He became the true master of heaven and earth. And here we hear the word of the Lord: Only those who lose themselves will truly find themselves; whoever tries to keep his life for himself loses it, and whoever loses his life finds it. Losing one’s life is the great movement of love, which is the move made by the deacon, the move made by St. John the Baptist, and finally, the dynamism of Christ Himself. We enter into these feelings of Christ and thus we learn the Word, to become with our own lives the Word of Christ and of Life.

In saying this, we have come to the other feast day that we celebrate at this time: the feast of Corpus Domini. It is a feast that began in the Middle Ages, and thus the sixteenth century reformers and to a certain extent also reformers of the liturgy in our century have in a certain sense demeaned it: Something medieval cannot be–it was said then and now–something great, profound. So then let us ask: Does this feast add something truly new to the already-existing great Eucharistic tradition? The novelty that appeared in the thirteenth century was the cult of the adoration of the Eucharist. With the birth of this feast, the use of the monstrance, of processions, of the tabernacle began, and thus also the silent dialogue before the tabernacle, in which we truly meet the Lord: we see Him there, we hear his words, we feel his presence. According to the reformers in the century of the Reformation, all this is wrong, it is grave error, because the Eucharist, under the forms of the bread and wine, was created to be eaten, not looked at. The Lord, they said, wanted only a celebration of the supper and communion as part of this celebration.

New food
But at this point we must ask ourselves what communion is and how we can eat this bread, which is the Lord Himself. What we eat during communion is not a piece of matter; this food is a completely different food–it is the Son of God made man. Eating this new food is not, thus, eating something, it is a meeting of my “I” with the “I” of the Son of God; it is a communion from heart to heart. Communion in the Eucharist is not something exterior. The communion with the Son of God that is given in the Host is an encounter with the Son of God; therefore, taking communion is adoring. We can receive it only by adoring, opening our entire existence to his presence, opening ourselves so that He can be the strength for our life. This is described by St. Augustine, when he speaks of his visions, in which he heard the Eucharistic Lord say to him: It is a different food, you will not assimilate me, but you must be assimilated to me. Thus communion is adoration. Adoration is not something that is incompatible with communion, it is the profundity of communion, and only by adoring do we enter truly into communion with Christ. Thus, by adoration, communion with Christ is infinitely deepened. We know how much blessing has come from the silent adoration in our churches, we know that the greatest saints of charity have been nourished by adoration of Christ who is present, because in adoring Him they learned his love, they ate and drank his love fully and completely, and they themselves became living love. We can communicate well only if communion is extended, deepened, made concrete in an adoration that really receives the mystery of this presence.

The adoration, however, which is part of the Eucharistic mystery, which is an intimate dimension of communion, has an even more profound connection in the mystery of the Lord’s will. We must ask ourselves, in fact, how it is possible for Jesus to become food–how can we eat Jesus? It is possible only because He is transformed, in his act of love all the way to the end on the cross and his resurrection, from a living being into a life-giving Spirit, as St. Paul says. On the cross, in his giving of Himself, in his resurrection He has become life-giving Spirit and thus is a sacrament for us. This act of giving that makes Him food, life-giving Spirit, is adoration.

Transformation of the world
Thus the Eucharist is not a dinner in which something is distributed, but is the presence of this passage to the life-giving Spirit, it is the presence of this dynamism of access to the Father. It is the Lord who opens the door, as the Letter to the Hebrews says: it is only by entering onto this path of transformation of the Lord, only by entering in this great act of adoration in which the world must be transformed into love, can we truly participate in the Eucharistic mystery. The Eucharistic mystery has this fulfillment: not only the transformation of the bread into wine, but the transformation of ourselves and the world into the living Host. And if we presbyters, in the moment of consecration, pronounce the Lord’s words– “this is my body, this is my blood”–if the Lord lends us his mouth to utter these words of conversion of the bread and wine, we say these words to ourselves and to the world and we pray to the Lord to transform us and make us ourselves adoration, the living Host. St. Thomas says that the ultimate content of the Eucharist is charitas, it is love. The Lord’s presence serves to transform us, to transform the world in adoration, that is, in an act of love and glorification of God.

In this moment we pray for you, dear brothers, all of you, that all your life may be contained in these words and that you can thus be true deacons, true priests of Christ. You gave me a body, You gave me myself; here I am, I am coming.