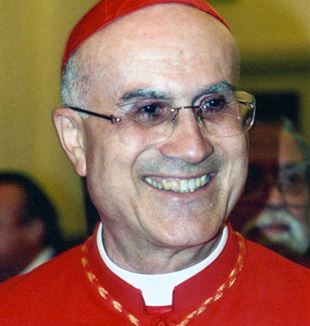 Your Eminence, you have expressed the idea that the crisis of Christianity can be traced to the crisis in the concept of truth. In just this sense, the Pope reiterated the tie between faith and reason in his most recent encyclical. Aren't both these affirmations based precisely on that concept of strong reason which post-modern philosophy has refuted with good reasons? Would it not be better for the Church's sake for it to claim for itself a concept of weak rather than strong reason? In the end, the post-modern fragmented concept of truth leaves just the space which the Church could occupy without contradicting its message of faith.
Naturally, there is some component of truth in the post-modern concept of weak reason. You certainly know Aristotle's words, which say that our reason is like the eye of an owl in the face of the great light of God, which thus cannot see anything. Even Vatican Council I, which elaborated a very strong concept of reason, added at the same time that in the contemporary context, reason has been so weakened as to be in need of help, as it cannot recognize the truth by itself. To deny this factual weakness of reason would in effect be unreasonable. But it is two different things if we say that historical conditions make it difficult for reason to recognize truth itself and the truth of God or if we say that in man there is no organ whose purpose is the knowledge of truth. And it is just this last position which is sustained in many versions of the post-modern concept of weak reason. This would be, then, a weakness of reason onto which faith would be attached as pure faith, in a certain sense without claiming knowledge of the truth. In this perspective, faith would be an answer which cannot follow from reason, but which illuminates subjectively certain persons and satisfies their subjective religious needs.

But who can say how truth truly behaves? Isn't the reasonableness of faith demonstrated precisely by the fact that it leaves open the question of whether or not it can be demonstrated, in a positively pragmatic sense, aimed more at hope than at knowledge? Could we not limit ourselves, with Richard Rorty, to reading Christianity as a tradition alongside other functioning traditions, without setting the claim to truth as a theme?
If reason is not a sphere open to faith, which is then taken up and moved forward by faith, if it is not a place that can enter into close relationship with faith, then faith remains something unreasonable, it is reduced to something fideistic, it belongs thus to the sphere of habit rather than truth. Tertullian has already coined this beautiful proposition: Christ did not say, "I am Habit," but "I am the Truth." While certain religious traditions, too, want to justify themselves by the fact of their being traditions, Christianity has always wanted to be more than only something that is justifiable through tradition, habits, culture. It wants to be believed as the way, the truth, and the life-a claim that in fact would appear to be unreasonable if it had not been given by God Himself in Jesus Christ, and in this way made understandable in a reasonable way. From the beginning, the Christian faith has contained within itself the dynamic of wanting to be witnessed to the ends of the earth. This is justifiable only if it testifies not only its culture, if it testifies not only its traditions, but instead it addresses shared human expectations, a shared capacity for comprehension, that feel they have been truly understood and, so to speak, relaunched and opened in Christ, and that thus contribute to an intimate unity among men.

In conclusion, Your Eminence, a look at theology on the world level. At the beginning of the new millennium one has the impression that the problems of incomprehension among the individual theological positions within Christianity have become so blatant that we can no longer even speak of poles of the same spectrum, but instead of different stars orbiting near each other with more or less no relationship with each other. In this context, there is in the air the request to convoke a new Council or a new General Synod, so as to express openly these conflicts that have been brewing since Vatican Council II, and possibly to transmit them toward acceptable solutions.
Maybe you too know the anecdote about the bishop and theologian Gregory Nazianzen who, when the Emperor invited him in 380 to the Council of Constantinople, answered in a letter, "I shall absolutely never again go to a council, since I have never had any other experience there than fighting, anger, and multiplied conflicts: it makes everything simply worse." This was Gregory's experience with the fourth century councils, undoubtedly a correct evaluation from a close historical perspective. Seen from a greater distance, we have to state that these councils were fundamental and were positive elements for the self-awareness of the Church and its faith. But what should be emphasized in this letter-which, among other things, Luther later quoted with great satisfaction, when he too no longer wanted to have anything to do with councils-is the recognition that a council always represents a strong interference in the organism of the Church. Personally I would like to compare it to a serious surgical operation. In this sense, sometimes an operation of this sort has to happen. But we must also reflect on the fact that every surgical operation provokes in the organism first of all turmoil and complications and does not automatically and simply bring improvement.
We see, in fact-and I don't think anyone can seriously deny it-the terrible upheaval that Vatican II brought about in the Catholic Church and in all of Christianity. Until the positive translation of this upheaval has taken place, I personally feel that a new operation of this sort would only cause further confusion compared to what it could resolve and heal. What is necessary, instead, is an increase in the mechanisms of consultation and encounter; the Episcopal Synod is just one of these. I think that ways of meeting together which are less centralized and less spectacular are more fruitful, since it is possible to have a more intense discussion, because external pressure is less, and because calmer processes of development can thus take place. To my way of thinking, today we should look for further forms for bringing together these contacts on a regional level. Thus in the long run what we would end up with is something like a truly ecumenical Council, but with a slower, more pondered process of maturation and of historical development.
(translated into English by Susan Scott.)