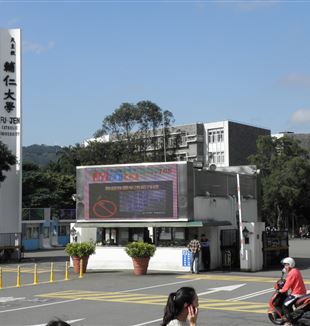 "Today, I finally felt that Christianity is a great, good religion. There are many stories that teach you about how to be a person. I no longer feel any of this is strange." This was the message written by a second-year student in the Department of Italian in the Faculty of Languages at Fu Jen University in Taipei, Taiwan, after visiting the exhibition "From the Land to the Peoples." For the first time, these young people have heard about Christ. And they have been struck by the same thing that struck us when we first discovered the experience of the Movement: the perception that within the encounter with Christ lies the possibility of becoming men. The exhibition, invited by the Archbishop of Taipei, Most Reverend Joseph TiKang (who has been a guest at the Meeting for the past few years), arrived last year, with the invaluable help of Icio and Isabella, and had numerous problems before it could finally open. The first problem was the Chinese translation of the texts: some thought that in a land so foreign to Christianity, the show would have too strong an impact and that thus it had to be adapted to the cultural context of this people. But meeting Christ is not, above all, a cultural problem; the encounter with Christ is an event open to all people in all parts of the earth. Finally, the exhibition was opened last December, with the translations being faithful to the original texts, and not specifically adapted to Chinese cultural norms. It has been visited by a large number of university students. We decided to let you read what the students wrote in class after I asked them about their impressions of the show. These comments (which have been translated from their not-always-perfect Italian to English) say much more than we would be able to write.

"Before I went to see the exhibition on Christianity, I did not understand much about this story. But then I discovered that it is very important for the people in the world. In the past, I did not like Christianity, I did not understand why this religion was so famous and why so many missionaries came to live near my home. Today, I finally felt that Christianity is a great, good religion. There are many stories that teach you about how to be a person. I no longer feel any of this is strange."
Antonio

"The exhibition this morning taught me the origins of Christianity and its spread. The show led us to talk about the story of Jesus and made us know its resources and its treasure. We can understand that the spread of Christianity is not something occasional."
Annalisa

"Christianity is famous throughout the world. Many people have to go to church on Sunday because Jesus Christ is the great God. Today I understood something about Christianity. God wants to help people to live. I saw a touching show today. I am happy and calm."
Elena

"Before I did not like Christianity because I did not know it well: there are too many strange people and obligations. Bit by bit I got to know it, and it seems interesting to me. Today I learned that Christianity is not only a religion, but also morality in Europe, and a significant and important story for Italy. Perhaps I will study so as to be introduced to Christianity."
Susanna

"I am Buddhist, but I was interested in the story the guide told us. These stories are so full of emotion that every so often, even if I did not understand the actions that the protagonists did because of the little knowledge I have of this religion, I was moved by their faithfulness and courage."
Sabina

"It is a great surprise to me that our university decided to show this exhibition. It is a witness, we can see the facts about Jesus Christ. We know that this man really exists. I saw it many times; every time it strikes me again."
Giovanna