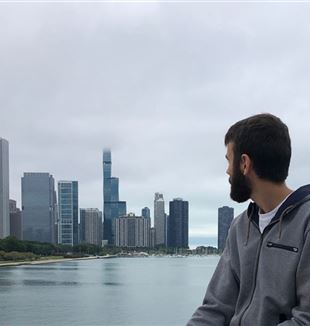 Last August, for a double degree program, I left for Chicago together with about 50 students from the Milan and Turin Polytechnics. As I did not immediately have a place to stay, I was hosted by friends from the movement for the first few days, and so I got to know a lot of people from the community right away, which is about 40 people.

In the first few weeks, I spent most of the say with my fellow Italian students and, once a week, saw friends from the movement at School of Community. Accustomed to life in Milan, it seemed strange not to experience the movement with my everyday classmates, and this initially led me to be a bit superficial in my relationships at the university. It was a disparity, however, that did not add up.

In mid-September, I attended meeting for the North American university students in the movement. It was an opportunity to get to know so many young people who are part of communities of only two or three people, and who have a horizon in life that is open to everyone they meet. They challenged my way of life to the point where I wanted to engage seriously and eagerly with my classmates from the polytechnic , who up to that point had been treated as "second class."
From that moment, a very rich period began. I proposed to study together – something unusual for them as they usually study alone – and to organize very simple lunches and dinners where the focus was to spend time together eating something "Italian" (risotto, orecchiette, lasagna...). As the weeks went by, my friendship with them became more and more interesting.

The best moment was just before returning to Italy, during finals week. We would stop to eat at the university every night and then study. One evening, we randomly met a guy who is in School of Community with me and I invited him to dinner. When one of my friends asked, "How do you know each other?", I at first deflected the question by answering, "It's a long story." Then, when we were alone, I recounted "this long story." I told my friend that I am part of Communion and Liberation, and not knowing and intrigued, he asked me a lot of questions. After an hour or so of conversation, he, a nonbeliever, said to me, "It's absurd that you, here in Chicago, live not just for yourself, but for a community of people and for something bigger than yourself."

A few days later, another friend found out "that I am in CL." I decided to chat a bit with him as well. He immediately started a conversation about how it is wrong for Catholics to engage in politics and other such topics. I explained to him that my experience of the movement has nothing to do with anything he has in mind, and I told him what it means for me to "be in CL." At the end he said to me, "If I had known before I met you, we wouldn't have been friends like this. But now that we are, it doesn't change anything for me."

Read also - That question in the hearts of the Magi

These two conversations instead changed me. With these friends, I had the chance to risk my whole self, and today I have the confidence that these relationships will flourish and are for my life like those with the people in the Chicago community.