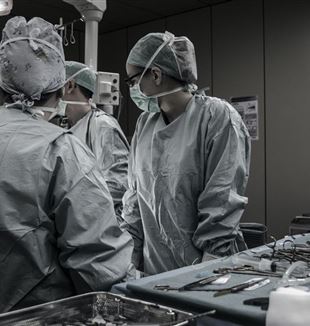 On Saturday, October 15, I was also in St. Peter's Square for the Audience with the Holy Father. The more the minutes passed, as we listened to Fr. Giussani and sang La Strada [The Road], the more the anticipation of seeing the Pope grew in me; it was the true anticipation of someone who was waiting for a father. I waited for him so much that, in an instant of awareness, I rediscovered that I was a "son." How many inevitable interpretations and reasonings had arisen lately in a number of dialogues. But if I had to say what became present again in me in that precise instant, and what I took away from the meeting, it was precisely the perception of being a "son." That became even clearer to me the following Monday when I returned to the hospital where I work. As a surgeon, I was asked to do an invasive procedure on an elderly patient to facilitate his breathing. Every procedure has its risks, but that does not make it any less necessary. After 24 hours, we were called because the patient was getting worse, precisely because of that surgical procedure.

In the hustle and bustle of those hours, the patient, already at risk, deteriorated further; it is not possible to take him to the operating room to stop his bleeding because he would not have withstood the general anaesthetic. Someone, pre-empting what might have happened, even reported to his relatives that he had died. My deputy chief of surgery told me that we could try an alternative procedure, under local anaesthetic, which was less risky but less likely to succeed. We performed it after talking to the patient's wife, who asked us to do what we could.

The days that followed were all occupied by this episode, which stopped me from falling asleep, despite long shifts at the hospital. But an indelible point also emerged. On the way home, my wife had asked me if I was worried about the consequences; I told her that I was mostly grieving for the man. But I realized that I would never shake off a crumb of that sorrow.

At work, more experienced colleagues reassured me by saying that "there are only two kinds of surgeons: those to whom it has happened, and those to whom it will happen." Even this phrase, while full of truth, was unable to make me feel less involved and "exonerate" my heart. What I really felt the need for was that position of sonship, the certainty that we are not "orphans." I realize this from my desire to be there and not to run away, to be there, especially for this patient, to look after him in the following days. The situation stabilized. I dropped by to see him, even though it was no longer necessary.

Read also - Uganda: "Here I can pour out my heart"

I think about when the Pope asked us to cultivate the missionary passion of the movement. I realize how the first place of mission is "me," so that a faith capable of making me a "son" within the circumstances may grow in me.