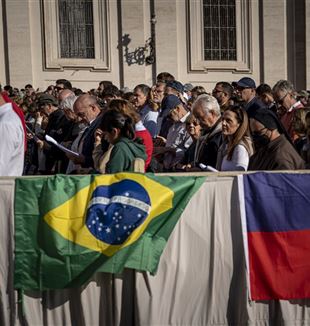 BRAZIL
Travelling to Italy from São Paulo just to attend a meeting and returning the next day was not my idea of how to spend my few days of vacation and how to spend my money. But when Fr. Aurelio enthusiastically spoke to us of the beauty of gathering around the successor of Peter to show our gratitude for Fr. Giussani, I decided to go. And thank God I did! It was probably the most beautiful encounter of my life. There, I realized just how many times Christ has taken care of me, particularly in the 43 years I have been following the movement, showing me a Christianity capable of fearlessly facing the pain that God asks us to live, and also of experiencing deep joy. It is a Christianity that is not formal, but that is always new and capable of responding to life. Giussani's charism brought me back to the heart of the Church when I no longer recognized its value. The Audience with the Pope summed it up perfectly: hearing what he expects from us from his own mouth, how he sees us and what he expects was like hearing him speak to me. Hearing us sing in so many languages, people of different nationalities, made me realize that not only was there a great unity among us, but that we have the same humanity that has found the same answer: Him.
Cecilia, São Paulo

PORTUGAL
"It is in the yes of each of us, in fact, that our following to the Church, which we wish to express through our united presence in St. Peter's Square on October 15, is made concrete," Davide Prosperi wrote to us to prepare for the Audience with the Pope. I cannot find a more succinct way to describe what happened to me that day in Rome. I already knew that it could be an occasion for my maturation, but that growth always comes unexpectedly. During that morning, in front of that "impossible unity" that I was seeing, the beauty of the gesture and the Pope's paternity, I was moved, full of the desire to love this place. I thought to myself, "This is the Church. This is the object of my hope. There is nothing abstract about it. The Church is these people who, like me, at some point in their lives had the grace of a ‘beautiful day’ where the desire they were full of was intercepted by something Other. And today they are here with me, each with her own particular story, but having encountered the same Presence." Looking at the Pope, I was surprised to recognize that "it is you who guides me, it is you who sustains the journey I make with my friends in the movement." The fascination of discovering my familiarity with this place brought me a deep sense of vertigo, because I was confronted with the fact that this is the way Christ invests history. As the Pope recalled, speaking of Fr. Giussani, "He always firmly maintained his fidelity to the Church, (...) because he believed that she is the continuation of Christ in history." If I had not said my yes, if my Portuguese friends and the others who were next to us in St. Peter's had not said it, and if the Pope himself had not said it, all the way down to the whole company of believers, Christ would cease to be a Presence present in human history. How is it possible that this nothingness that is me can be so precious to the history of the world? It is Christ who makes life great and the experience we have of Him in this companionship that is the Church.
Pedro, Lisbon

UNITED KINGDOM
The dominant sentiment that remains after last weekend in Rome is one of gratitude: to the Pope for having granted this audience and for his words to us; to Fr. Giussani for his yes that allowed the Holy Spirit to work through him; and to the Lord for having let me meet this charism. The journey to Rome was full of excitement; I was curious to hear what the Pope would say to us. What a grace, from the moment we arrived in St. Peter’s Square, to meet several friends from around the world. The start of morning prayer at 10.00 really changed the climate and put everyone in front of the true reason we were there, as a pilgrimage to Peter, to remember and give thanks for a man born exactly 100 years ago who had led each one of us to a deeper encounter with Christ.
Following this, the arrival of the Pope was a moment of great joy and unity, a unity not generated by us but by the fact that we were looking at him, that we were one with Peter. My first impression when he started speaking was that of really being embraced by a father, one who was telling me that he understands the difficulties I am living but I do not need to worry, and that the Church as Mother embraces my experience and desires to help me to live it more fully.
The Pope told us many striking things, and almost every phrase needs time to be meditated upon, but there were several key things that struck me as initial points of work for my life. The first was the Pope’s insistence that a time of crisis is a time of recapitulation and growth. This forces me to go back to the origin of my encounter more than 30 years ago, to go back to “my first Galilee” to use the words of the Pope. To rediscover the same encounter in my current circumstances really makes the road beautiful.
Then I was struck by the Pope saying that he hopes for much more from the movement and that the potential of the charism is still largely to be discovered. I perceived the Pope’s words as a real promise for our lives: if I am already living such a beautiful experience from the encounter, who knows what else I can expect as I discover the charism more and more?
Finally, I was struck by the Pope’s recall to the personal responsibility of each person faced with his or her own destiny, and the fact that we are only mediators for others in the encounter with Christ. What a trust in front of the heart of each person! It is the same freedom that Fr Giussani continually showed in front of each one that he met, a freedom I need to learn.
After the audience the pilgrimage of the UK community continued throughout the rest of the day with Mass together followed by a tour of Rome and dinner. Then we joined other friends in a parish centre in Rome for an evening of songs, with several hundred people from all over the world. As we concluded the evening by singing together Romaria as a prayer to Our Lady, I looked around at the different faces, of all ages and from so many countries, and I was struck by the thought that each one was there because in some way he or she had been touched by the charism given to Fr Giussani. My heart was filled with a gratitude to be part of this story.
Amos, London

ARGENTINA
Arriving in Rome from the "end of the world," as the Pope called his Argentina, was a long journey, but our desire to be there was stronger than all the difficulties we faced. Just as great was the beauty of doing it in the company of friends with whom I have shared my years at university and so much of my daily life. And what a surprise to find ourselves together again, more grateful than ever for this story.
We arrived on Friday and went straight to the venue to rehearse the Argentine songs for the next day. This, too, is something that never ceases to amaze me: we sing the same songs all over the world. And all over the world, in any community, no matter how small, singing has a privileged place.
Early on Saturday morning we joined the choir at the meeting with "Peter" who, like a rock, ensures that our existence – individual, family and community – mysteriously forms part of Christ's Presence in history.
We prayed, we sang, we celebrated, we were silent. Each person in that square could have given a different reason for being there. But we were all part of a people educated in freedom, in communion, persuaded by our experience, by what is our greatest treasure.
Francis arrived, an ordinary but original man, with his own path rich in humanity, reason and affection, welcome and freedom. An Argentinean like us, he is looked at, preferred and seized by God's mercy to lead the Church, for our good and the good of the whole world.
We listened to his words so full of knowledge of Fr. Giussani, of the history and present of our movement, full of affection and trust, full of need. He shared with us his concerns about an increasingly violent world and, at the same time, his prophecies -- for peace, first of all -- and invited us to accompany him. He told us that the potential of our charism is still largely to be discovered and that it can still make many lives flourish by "meeting the aspirations for love and truth, for justice and happiness that belong to the human heart and that beat in the lives of peoples." He invited us to let this "holy prophetic and missionary restlessness" burn in our hearts and to "not stand still." Like a wise father, he pointed out to us what we should cherish, care for and be grateful for.
What grace to be able to welcome this provocation, this revival. And what gratitude for the opportunity to share what Davide proposed to us in his letter before the Audience with so many friends: " As sons and daughters, we therefore entrust to Pope Francis the desire that animates us from deep within to offer, through the concreteness of our existence, our contribution of faith and of building the common good for the benefit of all our human brothers and sisters, continuing to beg, first and foremost for ourselves, for Him who alone can fulfil the thirst of the human heart: Jesus of Nazareth.”
Carolina, Ingeniero Maschwitz