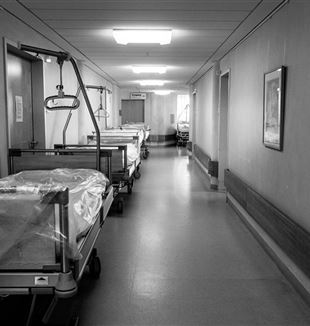 I have just come back from three days of the Rimini Meeting and I am overwhelmed, for the umpteenth time recently. In July I was discharged from the Niguarda Hospital in Milan where I was hospitalized for two and a half months. On May 11, suddenly, whilst on my way home from the school where I teach, my legs "fell asleep." The diagnosis was that I had a spinal cord ischemia, the obstruction of an artery that slowed blood circulation, from the abdomen down. And I found myself immobilized (except for my torso and arms) in a bed.
I had a strong sense of shock and fear for the first few days. The fear of no longer being able to walk, of being a husband, father, and professor that was split in half. As well as sadness at seeing so many activities that I had planned for the final period of the school year go up in smoke.

Then I was overwhelmed by a flood of messages, a wave of affection, friendship and prayers that opened my eyes: I was not alone in my grief. In addition to those most dear to be, there were also many unexpected "people". People who involved other people, even strangers, to pray for my healing, who went to shrines, monasteries and convents asking for prayers from religious men and women. Not to mention school children and their parents. An incredible, undeserved, gratuitous thing. When I then noticed the crucifix placed in front of me on the wall, I could immediately put a face to these people. Due to insomnia I slept very little, at the "first light of day" I would wake up and the light from the window would reveal the Crucifix, which was with me always. I did not have to do anything, just say yes.

Everything changed. I was able to accept things that, because my character, were unbearable (catheters, diapers, enemas), and indeed I was able to savor the kindness of those who washed, cared for, assisted, comforted me. I was able to trust the doctors and obey every request: from the many medicines I had to take, to the many examinations, to the physical activity required by physiotherapy treatment. And I was able to discover the different people, each with his or her own sensibility, who surrounded me: in addition to my roommates, the doctors, the nurses, my co-workers, the physical therapists, the internship students... Some were very kind, some were bad-tempered, yet I could receive something from all of them.

At some point, the happy certainty dawned that I was being offered an opportunity: to entrust myself to Him, even if I could do nothing, with the assurance that He would not leave me alone and that I could be happy. Even in a wheelchair. I could "walk," I felt that I was "walking" even still in a hospital bed.

With time, things got better. My recovery is happening in unexpected ways. The doctors and physical therapists have been great, but I have the perception that it has been facilitated and accelerated by "outside interventions": after two weeks, I had an abrupt improvement that surprised the doctors and changed my clinical "status" and destination, to a rehabilitation unit for less severe patients. My progress was faster than expected. Meanwhile, I gradually regained many small and large "normal" activities that we usually take for granted: washing myself on my own, bending over, picking up an object that I had dropped on the floor, dressing myself, walking – at first only a few steps, and then more and more confidently.

My journey did not end when I was discharged, but I am on my feet, walking. I was left with great sorrow for my two roommates who have since died. And the urgency for my"being well" not to extinguish my demand for Him, my desire to say yes to Him always. To Him who turned what at first seemed like "bad luck" into perhaps the most important experience of my life. Going to the Meeting – something that seemed impossible and even ill-advised until a few days before I left – was a means of giving back this gratitude, a thank you to the many who supported me. To the One who has sustained and sustains me, and will lift me up every time I fall.