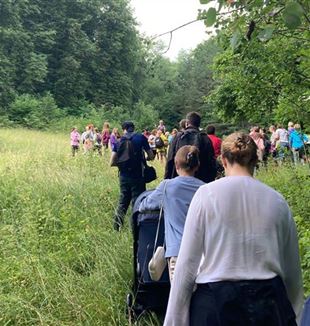 In mid-July, I went to Lithuania to visit our friends from the community. I went to Vilnius together with Giuseppe, Giorgio and Marco. As soon as we arrived we realized, through what our friend Darius was telling us, how dramatic the situation in Lithuania is due to the pressure of the war in Ukraine: an economic crisis, which sanctions are exacerbating, and the political and social tensions that are affecting daily life. From our very first hours together, we were surprised at the simplicity of what was happening. Starting from the first evening, there was an atmosphere of longing and gratitude among us – we were about fifty adults, teens and children. Lijana, the responsible of the community, and Alma, the 17-year-old daughter of Daiva and our very dear friend Mindaugas, who died last year, introduced the vacation. Alma attends Student Youth and gave a beautiful testimony of what a recent friendship with a Ukrainian refugee has meant to her, who has shown her a faith and humanity that she also longs for. An evening of songs then followed that concluded with everyone singing together around the piano, both Italian and Lithuanian songs, with gladness and surprise shining on our faces.

The following day, an excursion to the lake in Kaunas: this was a precious opportunity to catch up and to tell other about the last few months. Then games and School of Community, which was really rich and intense. What was happening made us feel "more at home than among our families," Rassa said. Ramunas’ intervention, who is a professional from the Lithuanian army, pointed to the root of this: "We feel at home here because Christ is among us." In the midst of our fatigue, our companionship allows for this concrete and living relationship with Christ. After dinner, there was a presentation on the figure of Fr. Giussani, together with songs that have marked our history. On Sunday morning, a meeting on education; it was such an intense conversation that it even encroached on the dialogues during lunch.

During the final assembly, Andrius said that during those says he had felt "loved and loving" before this Presence that brought us together. But what struck us most was what happened after the vacation. Many of us moved to Daiva's house in Kaisiadoris, in the open countryside. Tea, a chat, a very nice dialogue about the step the Church is asking of all movements. At the end, Paola pointed out that several quintals of wood for the winter had just arrived at Daiva's house. Normally Daiva and her husband would have arranged them, but now that Mindaugas had died, she was worried about how to do it. We got up, went to the woodshed and got to work. Within a couple of hours, we had sorted the wood, singing Lithuanian songs and Alpine songs: adults, kids and children, Italians and Lithuanians. It was a sign that during the three days of vacation, the challenged community had been rebuilt and made capable of unity, charity and gladness by the Event that happened among us, to which we simply said yes. For this I am so grateful, and I want to tell all my friends.