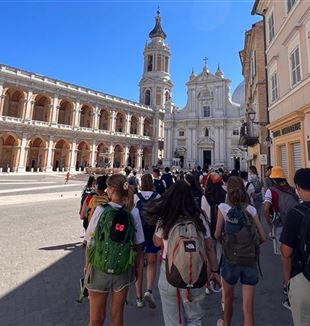 I participated in the pilgrimage to Loreto organized for high school graduates, university undergraduates and graduates. The fact that I was going having had to ask for leave from work, which I started a few months ago, already made me realize that so many things are changing in my life. Yet I never seem to be ready for this newness, often finding myself paralyzed when faced with choices, especially at this time when some big decisions demand that I take a stand. I became aware of my inability and was already upset during the car ride from Bologna to Loreto. My four companions, in fact, left nothing out of themselves, starting with the friend who spoke of her important career choice, to another friend who is awaiting to see if she has been admitted for a doctorate. So the day began very seriously, but this seriousness almost bothered me: how come they are so serene about life, and I get stuck so easily?

When I arrived, I was still caught up in my work and the decisions I had to make, but being in Loreto coincided with a moment of great peace, which surprised me.
Initially I was recalled by the moment of testimonies together: Riccardo, a recent graduate from Milan whom I got to know over the years, spoke of his encounter with the young people of the movement at his university, and of those fundamental presences that supported him even in the most difficult moments. "I could breathe again. Maybe what I was experiencing would not be resolved, but I was loved," he said. As I listened to him, I thought about how many times I too have had this same experience. For me, too, there have always been some friendly faces with whom, despite difficult circumstances, it was really possible to experience that "stable fullness," as Riccardo called it. This is a fullness that does not depend on the immediate circumstance. And this was the first flash of the day: I am loved and I am not alone.

The second step was pointed out to me by Fr. Francesco Ferrari. In his talk he reminded me that He who called me in the beginning continues to call me today. "Our life is vocation, it is the relationship with Someone who calls. We have been wanted from the beginning. We can look at the decisions we have to make like children." Another important point: it is not a matter of where I go, what I choose or what job I will do, but Whose I am. There is Someone who saves everything, who finds a way to make Himself present, introducing that "stable fullness" into my life. With this newfound relationship, after Mass, I went with the other four hundred young people to visit the Holy House, entrusting what was in my heart to Mary.

Read also – “My roses are blooming”

Then in the afternoon, the gesture ended with an assembly. I could hear the other young people talking and I was thinking about when I went through high school: every word seemed abstract and alien to me. Then something really happened over these years, thanks to which I can say with certainty that my heart, there in Loreto, only longed to make memory of the One who fills it. "Not if you think of what you have to do, but of Who you are. If you think about that preference, you accept everything." This is what was given back to me: the presence of friends in my life, the beauty of an accompanied journey, as has happened in these years, and the certainty of a daily call. With this it is indeed possible to accept everything. The essential thing when faced with decisions to make then is not immediately what I choose, but who is with me.