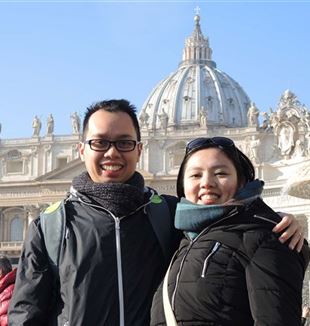 I am originally from Indonesia but have now been living in the Netherlands since 2012 together with my wife, Cindy. I was raised in a Catholic family and was baptized when I was eight years old. I only knew about the Movement when I met the priest who heads the parish where I am now part of. One year after my arrival in Europe I finished my Master study, managed to land a job, and slowly we settled our life here. Amid all of this, we always went to mass every week. Our life seemed to tick all the boxes.
However, it did not take long until the Reality touched me. At work, I started to feel unhappy. Everything became annoying to me: my colleagues, my boss, the work itself, and even my wife. I was not satisfied with my life, always wanting something more and something new.
Then in 2015 there was an Italian guy coming to the Netherlands for work and living together with my parish priest. From the beginning I already noticed that there was something different about him. He radiated positivity and joy to the people around him. Only one day after his arrival, he decided to cook for the Students’ Spiritual Exercises. Soon we become friends and started to talk about life and our works. One day I shared with him about my troubled heart, and he invited me to School of Community. First, I was a bit reluctant because I already had a lot to do and I already went to the church every Sunday. Why would I need something extra? However, out of courtesy, I gave it a try and after some meetings, I found it useless because I could not understand the text.
However, this friend did not give up on me. On a later occasion, he invited me to the CL Spiritual Exercises. Again, I was reluctant because it was a three-days-event and we had to pay some money, but my wife wanted to go so at the end I decided to come along. I came with a low expectation and as expected, I did not like the meeting. The meeting was in Dutch, and I could not follow the translation. The lesson was difficult to follow (they used many unfamiliar words) and I did not know anyone there. In short, I was really upset and regretted to have come.
But the Mystery is very patient and kept these friends around me, despite my rejection. They kept inviting me to School of Community, the Exercises, and to the summer vacation.
Despite my anger, I slowly saw that these people are different. When talking with them, I noticed that many of them faced the same problems at work like me, but they seemed to be more relaxed and free. They seemed genuinely happier and were able to breathe while I was barely able to survive. This sparked a question: “How can they live like this? I want to be like them too.”
The most determining event in my journey was in 2018 when I volunteered at the Rimini Meeting with a group of friends from Indonesia. I was a little bit nervous because it was my first time. But there I witnessed a lot of beautiful things which changed my points of view about life and work. Firstly, I was struck to notice that the whole event was practically sustained by the works of volunteers. Despite the hard and tiring work, many of them still radiated joy on their faces, sharing meals together and singing songs during their shift breaks. Secondly, I was so impressed with the contents of the meeting and the exhibitions. They did not talk about religion and faith as such, as I had originally thought, but also about politics, science, films, and music. Many exhibitions also talked about “heavy” subjects from different fields of study (archeology, astronomy, biology, and technology). Witnessing these exhibitions taught me that faith allows you to look at everything.

Read also - Returning to the essential

Lastly, during our shift break, Cindy and I were introduced to an Italian couple with whom we were able to speak about our marriage. The husband spoke English but the wife did not, so someone had to translate for her. In CL we talk a lot about “gaze”, but only during that conversation with the two strangers did I learn what that actually means. The wife, despite not being able to communicate with us, looked at us as if we had known each other for a long time. During the conversation, she even shed tears listening to us speak. I could not understand this. How could someone, whom we have just met and who did not speak our language, could feel our pain and cry along with us?
After the week in Rimini, I became more curious about the people from the Movement. The question I had, “how can they live like this?”, has made my heart even more restless. Even today I still do not understand everything. I still find Giussani’s texts difficult. But, just as the Gospel episode recounts when all the people in Capernaum had left Jesus and He asks the disciples if they wanted to leave him as well, my answer is like Peter’s: “Lord, I might not understand everything but if I were to leave you, to whom would I go?”
The radiant gazes and joyful life of these friends have left me disarmed from my closed and defensive heart.