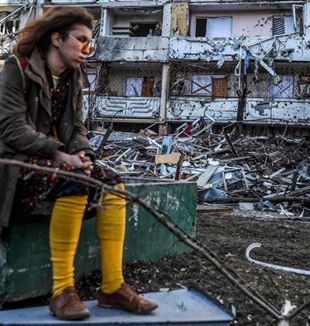 Cessate d'uccidere i morti (Stop killing the dead) is the opening line of a famous poem by Ungaretti, written at the end of the Second World War. The poet warns not to waste the lessons that man can learn from history. I read the poem because it is part of the curriculum of the school where I teach the second grade. I proposed it to my class and explained it, adding a bit of my own rhetoric, which seems inevitable when dealing with certain pages of history. It was mid-February and the crude images that fill Ungaretti's poems were striking, but they remained distant: the gnashing mouth of the mangled soldier and the crumbling walls after the bombing of San Martino del Carso were sometimes shocking, but they lost their concreteness in the imagination of those who, like me and my students, have only ever read about wars in books.

It was late February: a week later, Putin invaded Ukraine. The event was striking, but I entered my classroom just as I did before, until I happened to meet a student to whom I had read those poems on the school steps. She has a foreign surname, from the East, which I had read out so often whilst taking the register without ever asking myself where she came from. I saw her crying, accompanied by two friends. I tried to understand why: she told me that early that morning she had heard from her relatives who live in Ukraine and they had told her what was happening. How do you face a young girl for whom those news reports have become such familiar and concrete facts? I did not know what to say to her; on the contrary, I felt almost embarrassed by my silence, but I also remember that I almost "envied" her tears: who knows with what awareness and with what questions she went back to reading pages from her school books.

That same day, I meet two other kids. They are not my students, but because of their friendliness towards me at the beginning of the year, they have begun to share something new about themselves every time I see them. They are of Egyptian and Russian nationality. Even being in front of them did not leave me serene. The first student wanted to organize some sort of initiative to raise funds for the people of Ukraine and asked for my help. He proposed the idea with enthusiastic simplicity that exceeded the extent of my feeling disproportionate. I replied with a few hasty words and a smile, halfway between skepticism and surprise; but I also deeply envied his enthusiasm because it was the pure expression of a desire alive in him that responded to circumstances without shirking back for fear of not being "enough".

Read also - "In the name of God, I ask you: stop this massacre!"

The restlessness I felt accompanies me: can I go back to teaching poetry and grammar like before? Since that encounter on the stairs, the shy desire peeps out in me that even my work, and the way I teach, is not unrelated to the wounds of the human, without having to ignore them because they are disproportionate to any of our attempts to deal with them.