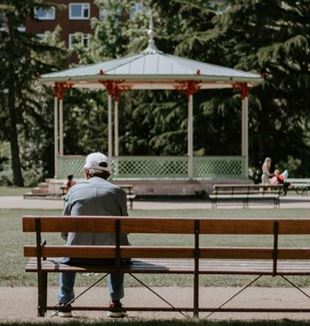 A few days ago I was supposed to eat with a friend of mine, but they were running late. I usually cannot stand such circumstances: sitting alone among other people waiting for someone, so I felt a little uncomfortable. So I sat on a bench in the sun. There was a person in front of me who was sleeping, and the smile on their face reminded me of the old man dressed in rags in a famous Tony Vaccaro photograph. The woman next to me looked at me with a serene face. Suddenly, the man opened his eyes and said: "How beautiful is this sun, we really needed it."

I smiled and I too abandoned myself to that sun, thinking: "How warm it is! How beautiful it is! Thank you." On that bench, I became aware of that moment of life, which was also given, that was there before but that I was not noticing. I then opened my eyes to what was going on around me: a cleaning woman who from a balcony suggested that I enter through a secondary entrance so as not to ruin what she has just cleaned; or the crisp sky in which the branches of the trees stood out, and so on. It went on like this for fifteen minutes: a positive note dominated in my gaze that was not there before.

That morning I had asked, "Let me notice You happening." Those few minutes were a caress, and all because of my friend’s lateness and the gaze of a woman. I was moved by a sunny day that had been there before, but not with such novelty. I was struck by how I then welcomed my friend on their arrival, happy and serene.