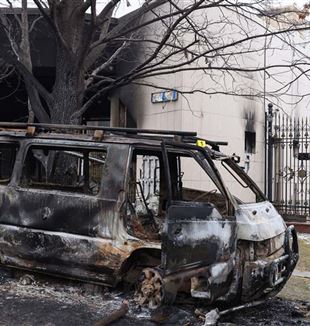 All is quiet in Karaganda. The unrest happened and is happening mostly in Almaty and in other cities of Kazakhstan. Here they have begun to grant internet access for a few hours, whilst it is night in Italy. After that it becomes impossible to connect, even by phone.
On the day of national mourning, proclaimed for the whole country by President Kasym-Zhomart Tokaev, I publicly expressed the wish to assure that the communities of the Kazakh Catholic Church also participate and share in the grief for all the people who died in the riots in recent days, for the many injured and for all their families. We Catholics especially, I added, must address an intense prayer to the Lord. And we are still living this pain on our skin and in our memory, especially here in Karaganda, land of the vast KARLAG (Karaganda Lager), where countless people suffered, blood was shed and died unjustly persecuted, even for their faith.

The life of every single human is more precious than the whole world, says the Gospel. That is why we are saddened by so much violence and disrespect for human life. We pray for the victims and for those who suffer all the consequences of what has happened.
In The Religious Sense, Luigi Giussani says: altered reason, which claims to be the measure of everything "can only end up exalting one point of view. He cannot avoid claiming totality for a particular (...) the particular that reason identifies as the total meaning of life and the existence of all things. It refers to this particular as an idol (...) Idols, to the extent that they are exalted, diminish what is human. (...) This explains why, for the Bible, the idol is the origin of violence as a system of relationships, the origin of war.”

Only with true religiosity, a real dependence on God, we can discover ourselves as brothers and sisters.

We see this dependence on the Mystery in the incarnation of the Son of God, in that helpless Child in the stable in Bethlehem, whom Mary gave to us: He is the hope and the bearer of true peace, which is a gift from God.

Read also – Tunisia: "Why and for whom we are here"

I am in contact with Silvia Galbiati and Lucia Beltrami from Almaty. They are well, although the situation is not quiet as following on from terrorist acts they have now moved on to acts of vandalism. They are smashing shop windows and stealing in many places. Silvia is very worried about the disabled children she cares for at the Diocesan Youth Center: they lack the special foods and medicines they need. She is appealing to collaborate with the social assistance center of the municipality.

We are in a state of emergency until January 19. One cannot go out onto the streets between 11pm and 7am.

We pray that the problems, which exist, can be solved peacefully, because violence and revolutions have never created a new society and a new world.

Let us entrust ourselves to the intercession of Our Lady, "a living fountain of hope", so that problems may be resolved through true dialogue, in peace and justice for the common good.