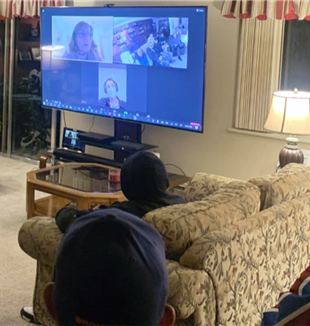 Seven years ago, I met Jim in a correctional facility in Colorado where he had been incarcerated for more than 20 years. When he was unexpectedly granted parole in 2016, he moved to Denver and our friendship continued. He asked me to help him start a non-profit transitional housing community, My Father’s House, that could provide housing for men who come out of prison on parole with the goal of helping them to establish stability in their life. The community is almost exclusively dedicated to serving men convicted of sexual offenses, who face enormous challenges in finding housing and feeling welcomed back into society. Recently, there were two beautiful initiatives we organized.

The first was on November 6 when we invited the men of the community to attend a staged reading of the Pulitzer Prize winning play, Our Town , by Thornton Wilder. The play tells the story of a fictional small American town, Grover's Corners, and the everyday lives of its citizens. It was a production of the University of Denver Prison Arts Initiative (DU PAI). The play featured eight incarcerated artists connected remotely, three previously incarcerated people now on DU PAI's staff, and six University of Denver undergraduate theater students. It was a powerful experience to watch the boldness of such a performance. At the beginning of the third act, the part of the stage manager, played by a previously incarcerated person, delivered this passage: “We all know that something is eternal. And it ain’t houses, and it ain’t names, and it ain’t earth, and it ain’t even the stars . . . everybody knows in their bones that something is eternal, and that something has to do with human beings. All the greatest people ever lived have been telling us that for five thousand years and yet you’d be surprised how people are always losing hold of it. There’s something way down deep that’s eternal about every human being.”

Everyone there—audience members and actors—had very diverse backgrounds, different ages, and remarkably different living conditions. However, on that night, there was a clear unity among the performers and the audience. Our ability to communicate and enter into a dialogue, which is something sought after in many areas of our society, emerged. It was a consequence of the human simplicity of facing and making explicit the questions about life and its meaning, which culminated at the end of Our Town: “Do any human beings ever realize life while they live it—every, every minute?” Spending time listening to those questions helped all of us, audience and performers, to free ourselves from the usual stereotypes and divisions that all too often characterize our relationships.

The second was on December 5 when I watched Unguarded with all the men involved in My Father’s House. Unguarded is a documentary on the Brazilian prison system Associação de Proteção e Assistência a Condenados (APAC). After the viewing, Simonetta D’Italia-Wiener, the director, and T.J Berden, the producer, connected online to join our discussion and share more about the APAC prisons.

Jim was interested in showing the documentary to underline the awareness and responsibility of having freedom because one’s sense of responsibility and freedom are severely damaged after many years in prison. The “APAC method” is centered on the education of each person’s freedom through love, trust, and discipline. Its impact was shown in the documentary through the many stories of men and women truly rehabilitated through their time in prison. The men of My Father’s House had the opportunity to share some of their challenges. “It is overwhelming to have freedom,” one shared. Before they left and we closed the evening with a beautiful dinner together, Simonetta pointed out how in My Father’s House, the men are already meeting the same gaze that is at the core of the APAC. Jim reminded us what everyone’s experience indicates: “Freedom is much more than the ability to choose. Freedom is the ability to become who you are meant to be.”

Read also - Camping with the knights in Kentucky

I am extremely grateful for my friendship with Jim and the opportunity to accompany him in building My Father’s House. It has been a wonderful journey that has shown me over and over again the newness of the gaze on the human person that I learn in the Christian community. The experience of accompanying My Father’s House continuously gives me the surprise of having hope, which I see is possible only for those who “have received great grace.”