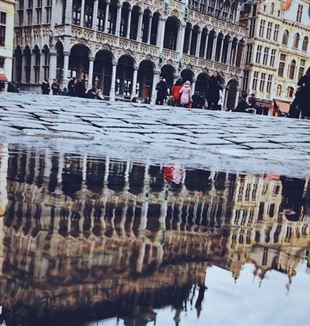 I work for a company that produces oxygen for hospitals. During the pandemic I continued going to work in person and thus did not share the difficulties that several friends were experiencing because of the lockdown. The introduction to the Fraternity Exercises did not particularly provoke me, until I read the point where Julián Carrón, taking up the various types of reactions to the pandemic and talking about the criterion of judgement, commented on the fact that there is a natural hope within us, that "everything will turn out ok", as we have heard so many times.

I remember that this question immediately came to me: "Has this hope endured?" At work I used to live like this: 'Yes, things will change now, everything will be fine'. At the same time, however, I saw that I was still afraid that this would not be the case, even in regards to my work itself. For example, problems relating to supplying hospitals with oxygen during the most acute phase of the crisis sometimes seemed insurmountable.

It was as if this question suddenly opened a crack in my conception of hope, so I was trying to understand "what" hope could be. Was hope something that made things go well, something that would give me some peace in the end... But this could not totally answer to my anxiety. With this open question I began to look at the things that were happening, even those that were not going well, not as an objection, but saying: “This situation must be resolved and then I can find peace and tranquillity. And move on.” It was more an attempt to find out what the answer to that restlessness might be.

Then something happened to a friend that helped me. With some friends, I went to the baptism of her fourth child. This woman, Eleonora, has lived in Belgium for several years. The godparents were Lien and Willem, a couple of Flemish friends of theirs - not in CL and Catholic by tradition – who a year ago had an accident that left their young daughter, René, trapped in the gate of their house. She fell into a coma and almost died at the age of five. The girl later recovered and was present at the baptism in her wheelchair. She is still debilitated and it is not known how or how long it will take her to recover.

During the celebration, I looked at these people, struck by the tenderness with which they looked at René. At a certain point, towards the end of the celebration, the mother read out a letter and said: "I thank Eleonora and Hugh who have become a second family to us and this in some way has helped us to overcome this dramatic moment in which we were desperate because of what happened to our daughter". Immediately after the accident, when René was in a coma, among various other suggestions, the doctors had spoken of euthanasia, which in Belgium is also allowed for children who for various reasons can no longer live a life in "acceptable" conditions.

I was struck, above all for two reasons: what I saw happening there, the presence of René's two friends and parents who were so attentive to a daughter in such need, was the fruit of the "yes" that Eleonora had always said, at times in a discreet and silent way within the events of family that a mother of four lives every day, and yet so concrete as to build a true friendship with that family. The second thing that struck me was that through that "yes" God has really brought hope into the lives of Lien and Willem. It was evident that what helped to give them the strength to continue loving René after the accident and to accept the radical change that it entailed was the fact that they felt embraced and loved within a deep companionship in their lives.

For me, being there was a moment of “true memory”, as the School of Community says, of an event that happened that finds no other explanation than the fact that God became a man two thousand years ago and that he reappeared to me, on that occasion, through the face of Eleanora.

I returned to my work with the question of being able to live the circumstances more and more within this memory, which is the opposite of the pietistic practice in which I have often found myself. I still live with the “hope” that I can fix things, that things will be OK. But that event happened, as sometimes in life happens by grace, and it rekindled in my heart the true hope for which it was made.