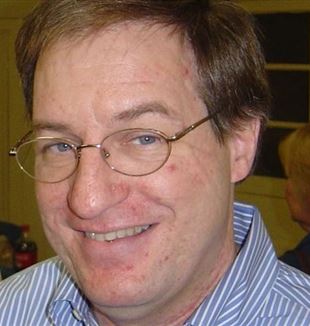 Four years ago, when Tom Sullivan left New York to go work at Texas A&M, I suggested that we pray an Angelus together each weekday by phone. It was an entirely self-serving proposal. My spiritual life was utterly undisciplined, but I knew that Tom would be faithful to this one small gesture—plus we would get a chance to talk regularly. And so we did.

Tom was my closest friend. The two of us met when we both encountered Communion and Liberation on the same day thirty-five years ago almost to this very day. I could go on and on about Tom’s capacious mind and memory, his sense of humor, his loyalty and warmth, his love for architecture and books. But instead of dwelling on all of these fine qualities—which can be found in any number of people—I would like to point out another of Tom’s gifts, one that was truly exceptional.

I recall the consternation I felt years ago when I realized that Tom had an uncanny number of friends who felt just as close to him as I did. Not just guys like Tom T, Rick, or Mark—dear friends from Washington, D.C., with whom he lived with for many years—but dozens and probably hundreds of other friends unknown to me. It seemed that wherever Tom went, he gathered up friends like Simon Peter catching fish. Realizing this, I at first felt a bit hurt and suspicious. Could I really consider us close friends when Tom had so many other good friends? Is there not a limit to the number of people we can befriend and love?

Over time, I came to understand that Tom, though as flawed as any of us, had a much greater capacity for friendship than practically anyone else I had ever met. I saw that slights and affronts hurt Tom as much as they did anyone, but once Jesus had given him a friend, no wrong would prevent Tom loving or seeking love from that person. And this endeared Tom to many people, even if most of us knew that we received more love from Tom than we had the capacity to give him in return. Tom never seemed to be scandalized by this. In the charism of CL, he had found a place that cherished and educated the human heart and that was enough for him.

In the Book of Hours, you will find a prayer that was very dear to Fr. Giussani. It is the Prayer for the Heart of a Child. The prayer invites us to beg for “a sweet and humble heart”:

a simple heart that does not remain absorbed in its own sadness;
a loving heart that freely gives with compassion;
a faithful and generous heart that neither forgets good
nor feels bitterness for any evil.

That may sound like an unobtainable ideal, something risky or even undesirable in a world like ours, but I saw this sort of heart in action in my friend. Take, for instance, the Zoom conversations that Tom’s brothers and friends had with him on his 60th birthday a week prior to his death. After months spent in isolation in a cancer center, the opportunity to be with friends, even if virtually, was a moment of great joy for Tom. All of us were amazed by the attention and concern that Tom struggled heroically to express to each person from his hospice bed.

In the hours afterwards, it became clear that, barring a miracle, Tom’s death was imminent. Still, many of Tom’s friends continued to pray for a miracle up to the last minute—and although Tom did not recover, many of us believe that we did witness a miracle.

With some of Tom’s other old friends, I had the honor of keeping vigil over Tom in his last few days, making sure he was never alone day or night. During that time, Tom, who was by then unconscious, received a stream of visitors, calls, messages, and prayers from people who urgently wanted to express their love for him. Fr. Giussani’s holy card remained right here on Tom’s chest and we prayed the prayer on the back countless times. There were dozens of Rosaries prayed, and Saint John’s Gospel was read to him.

Tom’s goddaughter Elizabeth escorted his brothers Paul and Will from D.C., then sang to Tom at his bedside with her Aunt Serena. The Patrick family texted Tom a song from Italy. Dean, a friend from Tom’s School of Community, read Tom passages from a book by Paul Horgan, a writer to whom Tom had introduced him (I am sure Tom particularly loved that. Nothing pleased Tom more than when one of his reading suggestions stuck). John brought Tom beautiful handmade birthday cards from his and Flor’s kids in Brooklyn. Tom T, Mark, and Rick stayed up during the night recalling hilarious stories about their early days living with Tom. Two friends gave Tom a great haircut. Natalie brought him sunflowers. Others sat beside him in silent contemplation and grief, often holding Tom’s hand or stroking his hair.

I wanted to tell you these things because they were the content of the miracle that I and others witnessed—the dawning of another world beyond this world. Those many tiny acts of love and friendship convinced me of God’s presence in that hospice room as much as a dramatic healing would have.

Tom’s multitude of friends are deeply grateful in particular to the CL community in Houston, his adopted family that looked after Tom so attentively and affectionately during this painful but grace-filled time. We are most especially thankful to Rossana and Michel, and Nino. As Tom bore the cross of his illness over these many months, Rossana, Michel, and Nino went to extraordinary lengths to support him.

A few weeks ago, after Tom had gone through a difficult surgery to remove a tumor from one of his vertebra, I was able to reach him by phone. When I asked Tom how he was feeling, he said that he felt grateful, explaining: “Even if I was the densest person on Earth, I would be forced to recognize that I have friends who love me.” Tom, along with Paul and Will, I and the rest of your mind-bogglingly large number of good friends are going to miss you dearly. We hope that when you do behold the Lord Jesus, you will ask him to give each of us a heart that is a little more like yours—sweet and humble, faithful, generous, and loving.