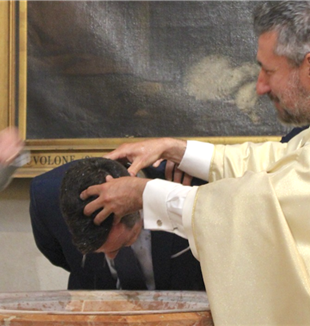 It was Saturday evening when I received a WhatsApp that reminded me that the morning after Endri was to be baptised in the church of the Annunciation, the chaplaincy of the State University of Milan. To go or not to go? The backlog of work I had to do made me lean towards no. However, immediately after, a new thought gave rise to a different suggestion: go, it is important. Where did this awareness come from? It came from the far from obvious story that had led to this Baptism and that had crossed my path over the years.

I met Endri at university as we both took part in the life of the community from the beginning. Only after some time, however, did I discover why he did not take Communion at Mass: he had never received his First Communion. His family, in fact, is of Albanian origin and of Muslim tradition, and for this reason he had never received the Sacraments. His participation in the life of the community stemmed from the encounter in high school with some friends of the movement that he met in Fontanellato, his hometown.

I only shared a few occasions with Endri at university, but I knew that he had decided to undertake the path of preparation for Baptism, and that he was doing it together with Fr. Marco Cianci, chaplain of the Statale University, responsible for university pastoral care in the Diocese, and a dear friend to many students. What happened on Sunday exceeded my expectations: it was a celebration.

About a hundred friends, both university students and not, gathered in the university’s church, right where every day the life of the university students happens. They were all dressed up; it looked like a wedding, but it was the baptism of a twenty-eight-year-old man who was taking a new step in a journey that began a few years ago thanks to his friendship with a school teacher (a journey that Endri recounted in a testimony in the Duomo in front of Archbishop Mario Delpini, during the last Traditio Symboli vigil). It is astonishing to see so many people catalyzed by the yes of a friend, which is so persuasive and at the same time so free.

At the end of the Mass, Endri Marco (his baptismal name) thanked everyone thus: "I look around, I see you, and I feel at home. The only thing I desire is to stay." Even his parents were amazed at what they saw, impressed above all by the unity that shone through: "You all look like children of the same father," said his dad.

Endri's enthusiastic and joyful adherence gathered us all around him, even those who, like me, had only crossed paths with him in recent years. For all of us, his invitation was a powerful reminder; what happened could not be explained without what gave rise to it: the story of an affective preference that, silently but faithfully, conquered Endri, who accepted it. Fr. Marco said in his homily: "It is our celebration, because in you, today as yesterday, we see Christ working in us". Thus the celebration is also for me, who only accepted the invitation. It reminds me that his story of preference is also mine.