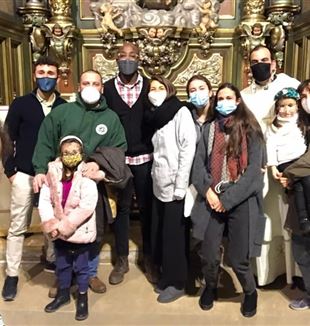 We organized the celebration of Mass in the parish of Sarriá, in Barcelona. I carry in my heart a phrase by St. Leo the Great: "There is no proper place for sadness, when we keep the birthday of Life, which destroys the fear of mortality and brings to us the joy of promised eternity.”

As so often happens to us, the impact with something true can remain theoretical and not mobilize or move us, and thus, as a result, we remain the same as before. This sentence could be one of many, if it did not find a faithful match in reality. That is exactly what happened on Sunday, December 27: there was no room for sadness. It is paradoxical that at the time of year when people living on the street are most homesick, most in need of a family, most in need of a caress, it can be said that there is no proper place for sadness. How is this possible?

That Sunday, a rather diverse group gathered to celebrate Christmas with the homeless in Barcelona's Raval neighborhood. We took them food, as we usually do every Sunday... This time, since it was Christmas, we prepared gifts and some songs. What a sight! If a stranger had approached and started to observe from a distance, they would have noticed first of all that there was no sadness. There was an inexplicable unity, a miracle! And although not everyone realized it, Christmas was being celebrated. Fr. Giussani says that "with Christmas, a new reality, a new presence has entered the world". That was exactly what happened. When we began the evening, there was no longer any trace of sad faces. Joy had entered, despite our fragility, into the forgotten periphery, with the last among the last.


Two events that day aroused in me the wonder of what is happening with Bocatas. At one point in the evening, Mustafá, as we were about to begin the songs, asked me, "Who are you? I have been in Barcelona for a couple of years and I have never met volunteers like you." He looked at us as if we were Martians from another planet. The root of his question was not so much this strange companionship, but the method that God has chosen for us to meet Him. It moved me, because twelve years ago the same thing had happened to me when I was invited to Bocatas and I discovered an extraordinary companionship in which Christ began to reveal Himself for me, slowly, until today when He has become the most fascinating presence in my life. I do not know if I will run into Mustafá again, but it is clear that a newness has already entered him, a new presence has appeared on his horizon.

Another fact was the moment of singing. Not only because of the way we were together and the joy generated, but also because of how some of them wanted to participate in person. Juanito, a man in his sixties, was the one who led the evening to the rhythm of popular Christmas songs. Between songs, I approached him, "It has been a long time since I have had this much fun," he said. I asked him why. He said, "Normally people do not even look at us, while you have come here to spend time with us. You give without asking for anything in return."

Charitable work educates me to discover what is most true in me, the fact that I depend upon the One who makes me. And it gives me a companionship, a communion that allows this newness to continue to happen.