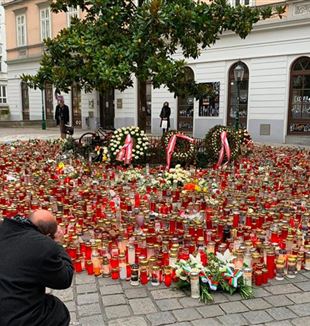 After the terrorist attack in Vienna, we felt the need to share our feelings and questions. We wanted to get to the bottom of things together and understand how our Christian experience - particularly the path we have followed in recent months - can shed light on this terrible terrorist attack.

Our first reactions to the horror were the same as everyone else: shock, anguish, perplexity, concern for one's family and friends, anger against the perpetrator and all those behind it. But soon other thoughts followed during our conversation, sketches of a new perspective.

For many, it was quite natural to bring what had happened and their fears before the Lord in prayer. The words that Church tradition and specifically the Psalms have taught us give us courage and hope, because God is faithful and takes care of his children. At the same time, the question was raised of what God’s protection concretely means, beyond the naive idea that suffering and misfortune simply pass us by.

Others have discovered the murderer as a human being and not only as a "monster" or enemy. Some wondered why hatred had triumphed over him. It became clear to us that anger and prejudice can completely determine our days too.

In the days following the attack, some rather harsh hashtags against the terrorist began to circulate on social media, formed by insults and swear words that invited him "to disappear." However, we were all struck by the testimony of the sister of one of the four victims, who in an obituary published by the Standard wrote: "If you want to honor my sister and her memory, I ask all of you not to react with hatred and exclusion, which would trample upon everything she has represented, lived and defended. (...) If my sister had had the power to choose how to behave in this situation, she would have wanted to be able to face this young man safe from bullets. She would certainly have spoken to him very firmly and would have said to him: ‘Stop this nonsense now, it makes no sense. Put the guns down and sit here with me. Tell me what makes you so angry.’ And I know that she would have talked, argued and disputed with him until he realized that there are other ways and not only this one. But she would never have told him to disappear.”

These words reveal a capacity for forgiveness that we all need to learn, because "I do not forgive" instead makes us old, slaves to the past and at the mercy of anger. So even in these dramatic circumstances, some have recognized the call to a special responsibility towards neighbors, colleagues and other human beings. Political or sociological analyses seem inadequate in the face of the suffering of victims and evil.

Read also – My inheritance as an American

What allows us to feel and accept the wounds of others as if they were our own is a concrete place where the words "Do not be afraid" become alive and give new hope. In this way we can share the discovery of a good Father who is shaping and renewing our lives at this moment with everyone we meet, even in the face of this terrible terrorist attack.