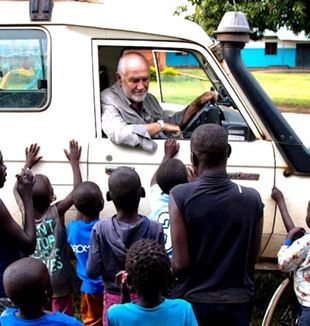 Cwinya cwer, my heart weeps. Not only my eyes moisten! It is a delicate expression in the language of the Acholi tribe of Northern Uganda, where I lived with my family for a long time and where four of my children were born. Brother Elio Croce, an Italian Comboni missionary, spent his entire missionary life in those lands. He ascended to heaven on Wednesday, November 11, during the night, from complications due to pneumonia provoked by Covid19.

Elio began his missionary life in those lands blessed by martyrs, bloodied by conflict and tormented by epidemics in Kitgum, working in the hospital where my wife, Luciana, and I worked in the eighties. He knew how to do everything. He built operating theatres and wards. He also promoted sunflower cultivation, creating a real oil mill as part of his mission, to which hundreds of farmers took seeds and returned to the village with oil for their family and the market. Then, in 1985, he was transferred to Gulu, to the large Lacor hospital set up by Lucille and Piero Corti, the most important hospital in Northern Uganda. There, Elio defied the guerrillas for twenty years and faced the Ebola epidemic in 2000. His courage, his faith, his charity are recounted in his passionate diaries: Stronger than Ebola and Diaries of War and Peace.

Witness of massacres and human wickedness, tireless in the organization of the hospital to deal with every emergency (thousands of evacuees every night sought safety within the walls of the hospital), he did not fear any danger because he knew that a Christian’s mission is to transform evil into good. Day and night he faced paths through the savannah to assist the sick and wounded. He organized the dangerous charitable task of burying those who had died from Ebola. He welcomed and cared for the weakest, especially orphaned and disabled children in the St. Jude orphanage, set up thanks to Providence and his big heart and strong arms, and many friends that Providence gave him. Next to the hospital, today, about a hundred special children acts as guardian angels to the doctors and nurses and the sick. The hospital of the heroes of Ebola now faces the pandemic.

In the small Comboni house inside the hospital, next to the chapel where he entrusted all his worries to his friend Jesus, in his humble room there were many books that nourished his hours of rest. Among them, as can be seen in his last interview, is Fr. Giussani’s book Affezione e dimora. In fact, after working for over 40 years in hospitals, serving the sick and the poor, his last work was a church - large, beautiful, full of paintings and statues of the saints and martyrs of these lands and of mission. It is a church for the people of the neighborhood around the hospital, for everyone.

When people needed him, they called him, because the good Lord had placed his servant there, brilliant and surly, smiling and determined, brave and lovable, generous and strong. Now God has called him: "Elio." "Here I am."

In an already serious condition, he was transferred from Gulu to the hospital in Mulago, in the capital Kampala. In the intensive care ward, two nurses had recognized him: "You paid for our studies, we were orphans. Now you are our father, let us help to cure you. Apwoyo. Thank you." His isolation only allowed for a couple of photographs which revealed his usual bright eyes behind his respiratory mask, with that intense gaze that plunged into infinity and conquered you. Then two last messages came. "Abandoned to His holy Will" and, "Totus Tuus."

Elio returned to Gulu to be buried in the hospital, as he had requested, in front of the statue of Our Lady, together with the Corti, Matthew and his fellow victims of Ebola. During the intercessory mass, a man among the "faithful people" exclaimed: "If someone were to ask me how it is possible to follow Christ today, the answer would be easy for me - by following a man like Elio.”