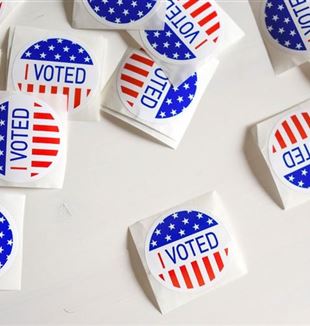 As you all know, on Tuesday, November 3, the US elections will take place, and the general climate is heavy and very divided. Unfortunately, we will see the clash between two strong ideological currents, and neither of them is personally corresponding. Furthermore, in recent months, not to say years, we have seen a progressive escalation in tone on the part of the politicians, which has found correspondence in the sparking of debates between people. At the moment everything is "political" and divided between Republicans and Democrats. Even the use of a mask, or not, because of Covid has become a sign of belonging to one side or the other.

In contrast, in our home – I am a Memor Domini - something different has happened. We have seen the birth of a dialogue that has involved and provoked everyone. It all started when an acquaintance of ours was appointed to a very important position, bringing the political matter "very close" to all of us. The dialogue between us has become very intense - even though only three out of seven have the right to vote because they are American citizens - and we all let ourselves be provoked and questioned. It was a real dialogue, where we listened to each other to really understand each other's experience and intuitions, and not to start preparing an answer in opposition. And it was a dialogue where no one interrupted anyone.

We were accompanied by Pope Francis' encyclical on fraternity that some of us were reading, which brought even more commitment to understand the criteria for evaluating what the "lesser evil" was.

I think the first miracle was the possibility to have such a dialogue, as normally there is always someone who gets up and leaves as they are not interested in the matter. There was a real tension to listen to each other and to walk together.

One evening, we invited a friend from New Jersey to dinner to help us understand the cultural context in which these elections are about to take place, in light of the economic implications, social justice and the pandemic. At one point, answering a question about why there was such a climate of exasperation - the big company that I work for has already warned that the post-election days will be characterized by great emotional stress - our friend cited the example that Fr. Giussani gives in chapter 8 of The Religious Sense, that of the circle and X outside the circle. If you delete the X, all that remains is the circle. Translated in our case as politics and power are everything, and that is exactly what the climate around us is generating. It immediately allowed me to breathe, both with respect to the criteria for the vote, and for the whole reality: work, relationships, the house. In short, if I delete that X outside the circle or if I detach myself from it, the circle begins to tighten and becomes oppressive. All the more so in a situation of uncertainty like the one we are experiencing.

Read also – What saves me from nothingness

What a grace, instead, to realize this again. And even more, to rediscover that that X has become flesh and becomes my companion, first of all through a Christian companionship and, in an even more pressing manner, through those who live with me. I now better understand two aspects that Carrón highlighted at the Beginning of the Year Day with respect to the need to see and recognize this diversity when it presents itself before us.