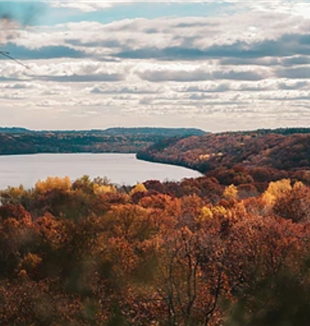 This year a small group of about twelve of us gathered in Minnesota in person to participate virtually with others from around the world in the Assembly for International Responsibles (AIR). We gathered very aware that the form of this year’s AIR was different because of the pandemic, but also with the certainty that it was not reduced in any way. While the pandemic can change everything, it does not alter the nature of one’s heart which demands fullness.

When I arrived, I was in the midst of a personal crisis. After eleven years of making our home and life in different cities for my husband’s medical training, we have finally reached the place which we believe will be our final destination, where we will set down roots. It is a strange time for new beginnings, with the COVID pandemic complicating things and casting an ominous shadow over the plans we make. I am also nine weeks pregnant with our fifth child--surprised, expectant, and very nauseous and suffering from decreased energy. The thought of making new friends is also overwhelming.

As I hold all these circumstances in tension and also see my husband preparing to enter his new position at work, a question has powerfully surged forth: Who am I? I have found myself feeling estranged from my own self and from my life, almost as if I were looking at myself from the outside. More questions have surfaced: What is it that I do in the world? What have I done up to this point? Is it enough? What is the value of my life and my contribution? Not having built a career outside the home during all these years, I feel I have nothing concrete I can point to. These thoughts became almost an obsession, and I could only conclude that I had done something wrong, missed some kind of opportunity to “make something of myself.” My heart filled with resentment.

During the opening lesson Fr. Carrón asked, “How come, after the encounter, we can go back to thinking like everyone else?” He continued, “Because we are fragile. Fragility belongs to our nature. This is why Someone came: To embrace our fragility. . . . So the problem is not fragility, but a shift in our center of gravity. We belong to Christ because of a preference for our life. This experience of preference should have been enough to defeat nihilism, but after a while we go back to putting hope on our self-affirmation, we continue to think of salvation as self-affirmation. In fact, the shift can happen without the negation of the Christian event, but simply relegating it to a category set off to the side.”

In the midst of all of this, I continued to read the Exercises, and was stunned when I came to the section on self-affirmation because I did not expect Fr. Carrón to speak about this and because it was clear that he was talking about precisely what was happening to me. “What is the root of the problem?” He begins on page 87, “Giussani answered without hesitation: self-affirmation as the ultimate goal and horizon of action.” And on the following page he quotes Fr. Giussani, who says, “Instead of affirming being, reality in its integral and entire truth, in its total, exhaustive destiny, we are determined by the anxiety to affirm ourselves.” He goes on, “We set our hopes on our own project. This is sin, putting hope in our own project” (88). Anxiety to affirm myself. This had become my starting point, and it infused everything that happened during those days--in particular, the moments of struggle--with a certain bitterness. Everything felt futile. I blamed myself and my husband and I cried out to God, asking Him why things had not turned out differently. I looked at my children and felt immense love for them, but also a certain sadness, dejected with the idea that at some point they would struggle with the same feelings. At this point I felt like I had hit bottom.

What amazes me, however, is that at the same time that I went through this great turmoil, I was also being accompanied by Fr. Carrón through what he writes to us in the Exercises. After reading what he and Father Giussani had to say about self-affirmation and recalling the fact that Christ has indeed entered my own personal history, it was easy to cede my battle for self-affirmation. What I wanted and want now is to start again--to “reclaim faith”--and allow it to be the only lens through which I view my life so that I may truly live and have the fulfillment my heart so forcefully cries out for.

It is humbling to see that after all I have been given I could “turn my back on the event” and set my sights instead on my own ideas and initiatives, as Fr. Carrón says on page 91. But greater than the sadness that I feel about this is the awe and gratitude I have before the fact of being called back, welcomed. I can identify in a new way with the experience of the prodigal son!

Now I am at the beginning of something. Instead of trying to make sense of my life according to my own logic, I start from the fact that nothing in my life has gone according to my plan, but originates from the mind of Another, infinitely greater than I. It is the closest I have felt to the experience that Fr. Giussani describes in The Religious Sense of being born and being struck by the impact of being.

So the way I see it, my husband is new. My children too. Each of them was given to me and is an unfathomable mystery. The home I inhabit, the small town where it is located, the faces that make up the community here. The fact that I look out onto a lake when I wake up each morning or that I carry a new life within me. None of these things were my idea, but my Father’s. With the grace of this gaze, which still feels so new and so tender, I experience a peace that I did not have when I was fixated on affirming myself. My questions and the intensity with which I ask them remain: Who am I? What am I here to do? But now, I address them not just to the void, but to a Someone.