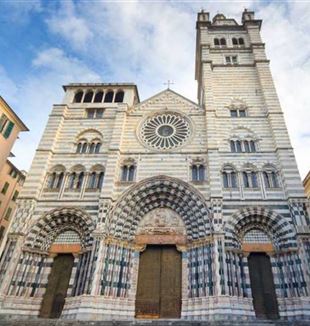 On Sunday evening, the new Bishop of Genoa, Fr. Marco Tasca, came by surprise to meet those who are going to be baptized and their godparents. He began by saying that he was greatly astonished to see that there were young people asking for Baptism in 2020, something so surprising that it cannot not shake us. He then asked if anyone wanted to tell him how they got there. Anduela got up and told him that she met someone, her teacher, who had invited her to a very small gesture – charitable work at Paverano, the small Cottolengo founded by Fr. Orione in Genoa (the Cottolengo is a religious charity organization) - to which she said yes, and from that moment she began to ask herself: "But why is she like that? What is behind it?" Over time, she got to know the other young people in the community and began to want to live like them. The bishop was astonished and asked me, her teacher, to say something. Thus I just said that for me she has been one of the greatest gifts in life, because it strengthens my faith by making me amazed again at what the Lord does. I added that in these eight years, there have been so many moments together, in which she has gradually got to know the people I follow.

The Bishop thanked us and told us that in his choice to become a Franciscan, one person had been fundamental. He too had begun to ask himself: "Why are you saying these things? Why is he behaving like this? Why does he live like this?" He also told us that the best gift we can give today as Christians is a relationship. Relationships are what make us grow. Why do we think that everyone has to become Christian? We have a beautiful proposal for life, but not even Jesus was able to take everyone with him. There were twelve of them, one even betrayed him and the others fled. Thus, the most beautiful thing we can do as Christians, he added, is to cultivate relationships, then the Lord will weave His story. We are asked to be attentive to relationships, in order to see what is behind them.