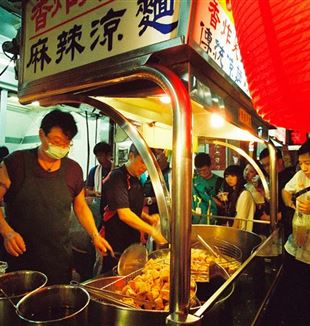 "It has been a long time since I was this happy!" "I feel like I have come home!" Angie and Rosalia, two Taiwanese friends in their forties, said this with beaming eyes after a long dinner in a restaurant of western cuisine at the end of April. We talked about a lot of things: about history, about Europe (they had studied for a Masters in European studies together), about family. But the most important thing was that we saw each other again after years. It was the most unexpected fruit of Covid19 for me in Taiwan.

Both were baptized about ten years ago in the parish of St. Francis Xavier in Taipei, both are married to non-Catholics, and after Baptism, both have (almost) no longer gone to church. Rosalia, shortly after her wedding in the parish, moved to Guanzhou, China, because of her husband Mike’s job, where she had difficulty finding a nearby church. Angie, whose husband is a doctor in a Catholic hospital in Taipei, simply never got into the habit of Sunday Mass.

Rosalia and Mike had returned to Taipei at the end of January to spend Chinese New Year with their native families, in keeping with ancient tradition. Then the pandemic broke out, and they were stranded in Taiwan. Towards the end of March, all public celebrations in churches were suspended. I, as parish priest, in order to reach the faithful on a daily basis, transformed myself into a priest-youtuber. Every day, I recorded a short video reflecting upon the daily readings. Rosalia and Angie, without yet having seen each other again, came across my videos and began to long for when they had met the church, for the catechumenate, for the joy that had accompanied them at that time.

Thus, after a month of videos, Rosalia contacted me asking me how I was. I replied: "Let us see each other!" The next evening, we had dinner together. For the occasion, she also invited her friend Angie, whom she saw for the first time after returning to Taiwan. During the evening, they told me very frankly that even though they no longer go to church, they have not lost their faith. They read the Bible from time to time, say a few prayers... But when I asked what this has to do with their lives, it turns out that they are two very detached experiences.

I still wonder what happened so strikingly during that dinner, but the fact is that the Mystery really does act in the most everyday aspects of life, and at the end of that evening we experienced that we had been reunited in friendship by Another. So much so that after the ritual "let us speak soon!", said who knows how many times to people never seen again, we did speak again soon.

Not only that, the friendship began to become "operative". After exactly one month, I baptized Angie’s two youngest children, Zoe and Francesco, in the parish - which had recently reopened. Rosalia is their godmother. A baptism prepared in an organic-healthy restaurant. Since then, Angie has been coming to Sunday Mass with her husband, who manages to find time despite the intense workload in the hospital. I also invited them to the School of Community that I hold on Saturday evenings, in which they participated with joy. We had to read the last paragraph of Fr. Giussani's At the Origin of the Christian Claim. Angie immediately bought the eBook in Chinese on the Internet, and, to prepare well for the meeting, she read it all in a single day.

One morning, I went to the Catholic hospital where Angie's husband works to visit a sick old Austrian priest. I went with Steve, another close Taiwanese friend of the movement. Since they both live nearby, I asked Angie and Rosalia to meet for lunch, right after the visit. This time we went to a Vietnamese restaurant, followed by coffee in a chic-bohèmien place. They asked a lot of questions about the movement, so I asked Steve to tell us about his experience – he was one of the first people to meet CL here in Taiwan and is a member of the Fraternity – after which Rosalia said to me: "Why did you not tell me that there was such a beautiful thing?” In fact, I remember very well that years ago I invited her to our meetings, telling her that this was the place that had changed my life. But words are one thing, experience is another. Now Rosalia is experiencing it herself. And anyway, the ways and time of the Mystery are not in our hands.

At the beginning of July, we organized a day trip with the whole community, to see each other again after the pandemic. Rosalia and Angie immediately signed up, and the latter also brought her parents with her. Another surprise: her parents are deaf-mute, but they were very involved in all the gestures: assembly, mass, lunch, games, and a walk by the sea. Angie was very happy. She said: "It seems like a miracle that I brought my parents here. I so wanted them to see what I saw."

Read also - Dublin: "Only Christ can fill my life”

Life goes on, friendship goes on. This Saturday we will be going to visit Xiao Ping, our dearest friend from the movement, who is in the terminal stage of a brain tumor. If it is possible, we have organized a three-day vacation on a beautiful mountain in northern Taiwan in September. Rosalia said to me: "I do not know if I will have to go back to China for Mike's work, but I really hope to be here with you.” I told her that we even have friends in China, specifically in Guanzhou. "Then if I go back there, I absolutely must meet them!" she replied.

Angie, for her part, has already become a missionary: she asked me if she can invite an Italian pizza chef married to a Taiwanese woman to the holiday: "They also need to come and see!” I told her: sure, but first I want to go and meet them in their pizzeria, which, according to Angie, is the best in Taiwan. I think the next dinner we will have together will be a good Italian pizza...