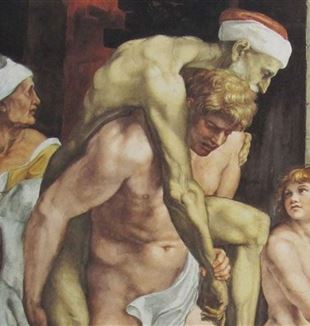 Some phrases by the writer Michel Houellebecq, lately, have often returned to the life of the movement. He is a much-discussed and controversial author in the French-speaking literary scene. But he is certainly not an author I would have liked to read: the malaise and boredom for life that emanates from his writings disturbs me.

This was before the meeting with Jean-Noel Dumont, a French philosopher from Lyon, who has written on Pascal, Marx, Péguy and Houellebecq. The key he gives to reading Houellebecq has really opened up the horizon for me. Noel states that the author of Serotonin describes the drama of those who live without hope, but at the same time talks about of their need for meaning: the immeasurability of their desire and melancholy for an "Israel that does not exist for them". A reading that gives further depth to that statement, often quoted by Julián Carrón, from his public letter to Bernard-Henri Levy: “I have felt more and more the desire to be loved. A minimum of reflection naturally convinced me each time of the absurdity of such a dream: life is limited and forgiveness impossible. But reflection could do nothing about it, the desire persisted and I must confess that it still persists."

Dumont was a guest for the fifth meeting of the newly created online cultural platform "É-née", which reaches friends around the French-speaking world: from Africa to Canada, from Switzerland to Belgium and France, of course. An instrument born in times of social distancing from a phone call with a friend from Toulon, Marie-Agnès. On that occasion, after telling each other how we were living quarantine, she told me about a visit she had made, a few weeks before, to a church near Paris where, under the direction of the artist Marie-Michèle Poncet, with a group of more than 100 volunteers, they had helped to create wonderful stained glass windows. Then Marie-Agnès asked me how are my friends in Syria were and I proposed that she ask them directly, perhaps by contacting Fr. Bahjat Karabach, a Franciscan from Aleppo, online. She replied by asking if she could invite her friends as well: "The four walls of the house cannot be the horizon of our life."

Thus this adventure was born, which we wanted to name after the character from classical literature, Aeneas: the hero who leaves behind the city of Troy, destroyed by flames, carrying his father on his shoulders and taking his son by the hand, to found a new civilization. Carrón continues to remind us of what Pope Francis often repeats: our time is a change of epoch. We do not know what the new epoch will be like, but we want to face it bringing with us the tradition that the past has given us.

At the meeting with Fr. Bajat, we found that there were more than 80 of us, we understood that our desire to open ourselves to the world, even if we were forced to stay at home, was shared by many. So we had a second meeting, this time with Marie-Michèle Poncet, who told us the story of Vincennes' stained glass windows. The third meeting was with Mireille Yoga, from the Edimar Social Centre in Yaoundé, Cameroon. To facilitate organization, we have created a page on Facebook, where you can re-watch the meetings.

At the end of the connection with Mireille, my sister, who lives in Belgium, wrote to me, saying: "I am shocked by what I heard. How can you be like that?" Perhaps the Lord urged us to recognize this need not to lock ourselves up during the pandemic, if only so that my sister could ask: "Lord, where do you live?"

At the Beginning of the Year Day 2018, Carrón said: "People today perhaps unknowingly await the experience of an encounter with people for whom the fact of Christ is such a present reality that their life is changed.” This time of the pandemic is no exception. Indeed, it exacerbates this expectation, as Houellebecq's work demonstrates.

Read also - When the heart "thaws"

With É-née, we have organized a presentation of Reawakening Our Humanity, with contributions from France and Switzerland, witnesses of doctors and nurses who have been changed by the experience of the health emergency and a dialogue on the life and work of Charles Péguy.

The pandemic seemed like a time to lock ourselves indoors, but it turned out to be an opportunity to break down borders and find distant friends.