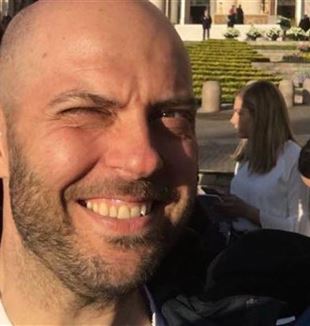 Four years ago, I changed companies and after a few months I found out that Rocco, a friend of a friend from my youth, worked there. We immediately got on, he was a person who was very alive, full of passion: for music, motorbikes, materials... The opposite of when we talk about the "torpor of the “I” that restrains involvement with what happens." Slowly, despite our diversity (I am a much calmer person), we discovered a point of origin that united us and that made us a reference point for each other. This familiarity grew over time, to the point of helping us in everything, including problems at work, without needing to say anything to each other, even just through a coffee and a joke.

Then Rocco got sick. At the end of last year, he was almost ready for a transplant, but in January, before Covid-19, his illness got worse and he was forced to absent himself from work. I went to visit him at home, with his family. Then, due to the emergency, we could not move anymore. He was admitted to hospital and had been unable to speak since Easter, so we kept in touch by message.

His wife asked all of his friends to meet in the evening on Zoom to say the novena together to the Martins, the parents of St. Thérèse, to ask for his recovery. I agreed, even though I am not a novena girl. He was a great friend of mine, I would have done anything. We connected, we listened to the Martins' love letters and about their vocational path. I only knew Rocco's wife, I focused upon the sentence that asked for complete recovery and focused upon greeting my friend, who was connected from hospital.

After the first novena, we began another one, to St. John Paul II. I would work until 8:30 p.m., and then would log on before dinner. One thing struck me about myself: I always wished to keep the camera on, even if I was not particularly presentable whilst smartworking, but it was a way for me to show my friend that I was there, with him. I realized that the Zoom novena was the only way I could relate to him.

From there, little by little, I was moved to discover that this was not a lack, a limitation due to the pandemic that I had to undergo, but that it was the truest way to be friends. What is friendship, if not accompanying each other towards destiny? And I had this great privilege: to be with him, who had to take this step. To be a true friend, to the end. It was no longer a duty to obey reality, but a gratitude to Someone for having given me the truest way there was, who saved my desire of good for Rocco.

I physically felt Someone making my head spin: initially I only looked at Rocco’s illness, now I could see what was really happening: a man who was going towards his fulfillment, and Jesus at his side holding out his arms. And the mercy of God who saved the good I wanted for Rocco, allowing me to accompany him in this step.

At the beginning of May, I received a message from his wife who announced that he had ascended to heaven. And I had to choose what I wanted to look at: could I say that someone dear to me had been taken from me? Rather, I had been given the gift of his daily companionship for four years, a fortune, a gift not to be taken for granted. I might not have known him.

This is what Rocco wrote to his priest friend: "It is a difficult period that challenges me daily on what to choose, on which side to stand. And I must say that, paradoxically, I feel lucky because I feel the Christ’s companionship more present. In morning mass with the Pope, the Rosary in the evening, prayers during the day. Embracing my family, looking at them with gratitude simply because they are there and not with pretense. If I recounted my recent story to a non-believer, they would call me crazy and unlucky. Instead I realize that this time is full of his Presence that fills everything, leaving me happy to continue what I am asked to do today: to be a cancer patient during the time of Coronavirus. I remain embraced by the Cross of Christ, the only thing that is certain, that does not waver, in a time where statistics and calculations of probabilities strive to predict the future."