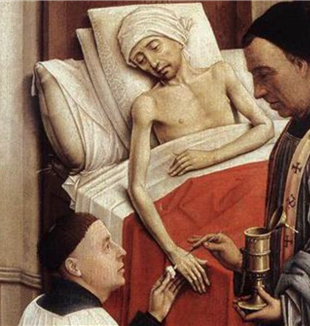 When I was in seminary, a dear friend of mine told me something I have kept thinking since then. He said that in the "Hail Mary" there are only two instants that really matter: now and at the hour of our death. In this time of pandemic, I often go back to that, especially when we pray the Rosary together with my community in Boston. There are only the present moment and the moment of our death. Only these two matter. If you look at how the world is responding to the crisis, you might be led, instead, to look frantically at the past, letting the nostalgia for how things were dwell in your heart, or at the future, trying to predict when these things will pass and things will go back to normal. The Presence of Christ does not reveal Itself with all its force when we dwell in the past or project ourselves into the future, because that is a place filled with a lot of man-made hypotheticals. Instead, the Presence of Christ becomes supremely interesting now and in the hour of our death.

A few weeks ago, I gave my availability to bring the sacraments to patients affected by COVID-19, especially to people close to the moment of their passing. I moved in with another priest, Fr. Michael, who also joined this diocesan effort. Since then, I have had the grace of being called to different hospitals to administer the sacraments. When I get there, what really strikes me is the solitude of those rooms where patients stay. The patients are alone, without their closest relatives and the most important relationships in their lives, facing by themselves that great moment in which everything seems to end. The nurses and the doctors do what they can, with immense generosity, to accompany the patients, but naturally they are pulled in many different directions, and they do only what they can.

But in front of that moment when all things seem to unravel, who is able to say something? Who can penetrate that solitude and say a word that really matters? What type of presence can look death straight in the eye and say “Where is your victory”? Yes, we are doing our best to stop the spread of the virus practicing social distancing, rushing to fabricate a vaccine or a treatment through the might of our scientific and technological prowess, but what about those who are already ill? Those who are already dying? Who can save them?

These visits are profoundly moving to me because I can literally see how there is only one Presence who has something to say about that, one, single and unmistakable Presence: the Risen Lord Jesus Christ--His words, His prayer, His voice, and His gestures.

One day, I went to a COVID unit to give last rites to a person who was very close to dying. As soon as I entered, I saw in the faces of the nurses and the doctors a real element of surprise and expectation. They were waiting for Him to come. I see the same expectation on the faces of people who come to confession, to Mass, or sometimes on the faces of the kids who come to GS. They were already waiting for Him, even those who were not even religious or Catholic. Some nurses were, and they welcomed me as if I were someone they knew for a long time.

Read also - The reawakening of Aimara

A doctor who was not Catholic, nor any specific faith, was the most intrigued of all. He wanted to accompany me inside the room to be a sort of altar boy holding the book of the anointing. He remained extremely attentive throughout. Every word or gesture of the liturgy somehow spoke to him: the prayers, the anointing as if this poor man alone and ready to die were a glorious king, the silent prayer of the laying of the hands. But the moment he looked at me with the greatest excitement was the singing of the Litany of the Saints and of the Regina Caeli at the end. The chanting became a tangible sign of a simple fact: there is a home, our real home, waiting for us, a home made up of real people, with real names and stories--and Christ. At the end of this life, Christ wants us to go there. It is not an imaginary place, to the point that our heart can clearly hear the echo of that amazing companionship. We heard it already, and it calls us to go beyond.