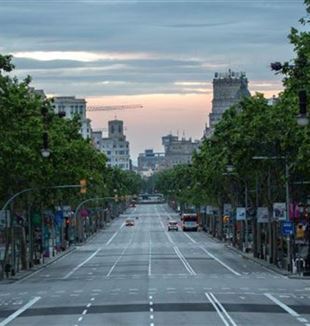 There are things that already sound familiar to us all because of the journey we have been on for some time now. It seems to me that these times are eminently vocational, they are moments where it becomes true that circumstance is not a secondary factor, but an essential factor for our vocation.

The other day, amongst the school faculty, in chats and on Whatsapp, all our difficulties of being teachers during this period emerged…the anger of parents, your own anger…It is already difficult when we are at school, imagine now that we are at a distance. Talking to the teachers, this is what came out: the difficulty of being a teacher is evident, but the difficulty of being a parent, a husband, a friend has also grown, because these are circumstances that we did not envisage, conditions that we did not envisage.

But more than a difficulty, they are a condition for our vocation. Being aware of this helps me a lot. The condition of being a teacher now, of being a husband now, is what we are asked to live now. A condition in which you, depending on the extent to which you accept it fully- the extent to which you accept the limitations of the circumstance but also the limitations you perceive of yourself- can review and re-define your own vocation. But within a relationship of dialogue with the Lord, despite the impotence you might feel, or the incapacity that you perceive in front of this circumstance. You can come out of this situation being more a son, more a father, more a husband, because you have learnt to be one within this circumstance.

What recently happened to a friend of ours is an example of this. His father died a few weeks ago; he was already sick but he also caught Covid and died of pneumonia. Our friend was in the hospital corridor and was not allowed to see his father, when normally it is right for a son to see his father when he is dying. He began to pray in the hospital corridor. At first, he asked the Lord: "Let me go in to see my father." As time went by, and in that dialogue with the Lord, his prayer changed, until he asked Him: "make Yourself present to my father, who has never known You, and take him with You." After a while, his father died.

When this friend told us how he had learnt to become a son again in that circumstance, it became evident to me that this situation is a condition that allows us to become more of a son, more of a father, more of a teacher, so much so that vocation becomes more essential, it kneels before the circumstance. It is only possible to live this within a relationship, in the relationship for which we are made, curiously through the circumstance and the flesh. It does not cease to be through flesh. It is not possible to live the condition that we have to live as an enrichment of our vocation if not within this relationship.

Read also - In the face of uncertainty, hope prevails

In this sense, offering becomes a great resource because it is the surrender of the present and of the circumstance to the Lord, saying: "This is Yours, not mine. This pain is Yours, this sin is Yours, this incapacity is Yours." In order to say this, we require two things. Obviously, it requires an exercise of reason. It is a step that requires us to think and say it. It is an exercise of reason that obliges us to surrender. And you deliver it as you know how to deliver things: first of all, with words, by saying it. And, evidently, it also requires a work that draws out the simplicity that has been initiated when you say: "this is Yours". Through simplicity, one can say to the Lord: "this is Yours, it is not mine." But by drawing out that simplicity, it forces you to enter into a painful work, because the fact that things belong to someone else and not to you requires a simplicity and a willingness for that circumstance to be given from one to Another, and it is evidently given in the gesture of prayer, in the gesture of participating in the sacraments, in the gesture of offering my time, and so on. It requires a work of reason, its requires your will to surrender and enter into the the circumstance and into the pain that that circumstance implies.