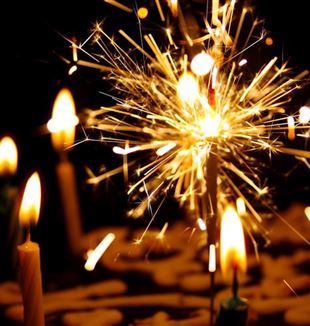 The are some things that happen without choice. Like Coronavirus coming into your house. Until the day before, I was convinced it was an enemy alien to me. But then the ambulance’s blue lights tormented the evening darkness. And a nurse dressed like an astronaut entered the house. And so Dad left the house. In his hand, his cell phone and charger, a rosary wrapped around his wrist; nothing else. He blew his family a kiss and went down the stairs into darkness, the darkness of the night and the darkness that marks the total absence of certainty. And so I went to sleep. The next morning, I turned on my cell phone and read a message from a dear friend who had sent me a phrase by Chesterton: “But men signed of the Cross of Christ go gaily in the dark.”

This is the challenge before me in such a dark moment. To be happy, because I am signed by the Cross of Christ. How can I be happy in such a situation? In the most trivial reality ever, the usual, lunch, dinner, online classes, and nothing else. And this question, about how one can be happy under the Cross of Christ, did not give me peace. Until a few nights ago, when Cecilia turned six. With some friends, I decided to connect online to sing and play happy birthday to her. A trivial gesture, it did not require much effort, five minutes of my time, so I decided to play the simplest song there is: "Happy birthday to you." At the end of the song, I looked at Cecilia on screen and her eyes were glistening. The eyes of someone who was very happy. That is when I realized how to be happy within the Cross of Christ. I am asked to look at everything that happens in my day with Cecilia's eyes.

Read also – Straight to the essential

I had to offer what I had in front of me: studying, cooking, living with my brothers, living intensely what I had in front of me, even if it was trivial. Because, locked within these four walls, I am only given this. Trivial everyday life, which however, if looked at with Cecilia's eyes, becomes interesting in all its little facets. I began to look at everything with a new gaze and to offer every gesture and every daily effort. I began to appreciate banalities that I had previously taken for granted. I began to mature relationships with my brothers, who in an instant went from being roommates to life companions. And all this happened because Christ did not hesitate to burst into my life, without asking permission, through Cecilia's eyes, through friends who have the courage, in the most exhausting moment, to challenge me to go joyfully into darkness, because I am marked by the Cross of Christ.