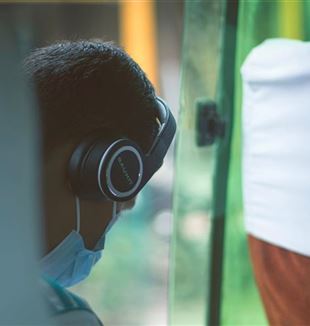 Today I finish my period in quarantine for having “transited and stopped” in the “red zone”: I am a journalist and I was there for work before the area was blocked-off. Five days of absolute isolation at home, after about ten days of frenetic activity, from 8 am to 10 pm. A sudden and unwanted stop. In both situations I "experienced" that this is truly "the age of the person", in which it is clear where one places their certainty and hope, and to whom they belong.

Firstly, in the tensest and confused moments last week, I was surprised that I was not scared. Amongst colleagues who oscillate between unconsciousness, fatalism and panic, I was surprised to be increasingly aware of the severity of what is happening, but not paralyzed by fear. And since I do not think I am different from the others, I am beginning to think that this is not my doing. Apart from saying the Angelus in the morning and in the evening, I did not have a single break during the day for the whole of last week: I missed the time that I usually dedicate to School of Community on the train (my company forced me to go to work by car and avoid public transport for precautionary reasons), but even in those turbulent moments I thought about our companionship, fuelling the question about my position in front of the complex and unprecedented reality that, hour by hour, I had to look at, try to understand and recount. And when I saw Carrón's letter, I really thought: I knew you would not leave me alone! It is the Event that comes towards me and offers me a new gaze.

Suddenly, I found myself in quarantine. In addition to Carrón's letter, I read and re-read the text of School of Community about belonging, which I have never felt so pertinent to me and to the historical moment we are living in, where it is enough to look around to realize that what is at stake is the person and what they consist of. The testimonies of some medical friends and, specifically, that of my son, who started working at the Sacco Hospital in Milan a few months ago, are also precious to me.

"Belonging to Christ is the content of a new self-awareness": "I am You who are making me ". Perhaps, not being paralyzed by fear is a first fruit of the small awareness that I have of this and the fact that I only have to say "yes", to discover that everything is for me, even life and work in this period of Coronavirus, and even during quarantine. It is not fatalism, but obeying reality. And I realize that it is precisely within the conditions in which everyone lives and it is by making the sacrifices that everyone is forced to make that we are called to discover, experience and witness a more human position, compared to unconsciousness, panic and fatalism. It is our contribution to the common good, at a time when - just look around and read the newspapers - everyone wishes not to be paralyzed by fear and seeks, often in vain, a point of reference, an "authoritative presence" around which to unite to respond together to the challenge of the virus and its social and economic implications.

Read also - "My day in the Coronavirus ward"

In these first weeks of emergency, however, it is clear that there are also those who are able to stay inside reality, putting themselves at stake where they are with willingness and creativity. So I took Carrón's invitation as a real "working hypothesis" and I started to look for these people. I had several interesting meetings, with believers and non-believers, for example, with a young teacher from a state school. He had been pointed out to me by a friend of ours, who is his colleague, because he was among the first to use the computer and social networks as a means not to leave his students alone. I interviewed him and, a few hours later, the same friend told me
that this young teacher would like to meet me, together with her, to develop this relationship. I do not know why, I feel like I have not done anything beyond my work, but it happened.