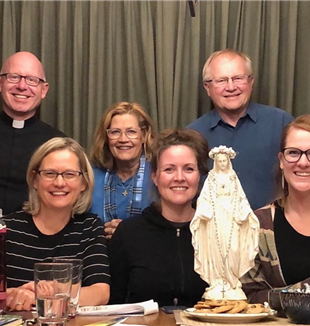 During Christmas I ended up in a conversation about reality with my brother-in-law. Such conversations are not uncommon, but my response this time was a surprising change. He is a physics teacher, and we ended up discussing a dynamic of reality along the familiar lines of “if a tree falls in the woods and no one is around, does it make a sound?” His position seemed to challenge what I have learned and the objective nature of reality. I had recently taught parishioners about this very topic, but here he was, providing a completely different view. I was tempted to either defend my position forcefully without an openness, or immediately think he was smarter than me, so he must be correct. Unexpectedly, I found myself thinking about his position and putting it up against what I knew and believed. I found I was neither afraid of being wrong nor insistent that I was right. I wanted to get to the truth, so I asked more questions.

What I saw happening was what Fr. Giussani describes as a tradition needing to become a crisis or a problem. “Tradition, the endowment with which life enriches us at birth and during our early development, must be lifted before our eyes so that the individual, to the extent that he or she is alive, intelligent, may sift and test” (The Risk of Education, p. 70). I was given a tradition that makes me believe that if a tree falls in the woods and no one is around, it still makes a sound! This dialogue was challenging my thinking, but now I could sift the new content and try to understand more about the other position with the hope of better accounting for what the truth was.

After another conversation, I came to a new understanding of my position, not by embracing the opposite, but by deepening the position I already had. Typically, such conversations at holiday times just start and stop and live in the realm of ideas; however, this time it seemed as if there was more of a true dialogue between the two of us, a deeper sharing of ourselves, the paths we have been given, and our search for an understanding of reality.