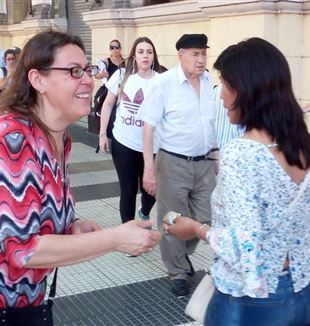 This year, as in the past, the DEMEC (The Department of Movements and New Communities) of the Archdiocese of Buenos Aires invited us to participate in their "Christmas Mission". This involved going out into the streets near the cathedral and wishing people a “Merry Christmas”, handing out small images of the nativity with a phrase by Pope Francis about the birth of Jesus.

The Cathedral is located slap bang in the centre of our city’s commercial life. It was a summer day, full of sunshine and it was over 30 degrees. We were surrounded by offices, businesses, shops, banks, street vendors and a multitude of people, all in a hurry to go about their business. In this context, we asked ourselves: "Is this gesture useless and inappropriate or is it courageous and surprising?" "Will it help us to keep ‘waiting’?” But waiting for what? It is the waiting that Carrón spoke about at the Advent retreat of the Fraternity of Saint Joseph: “With this expectant awaiting we desire to prepare for the fact of Christ, for Christmas. Every year when Advent season begins I cannot think that this awaiting is something that automatically happens.” 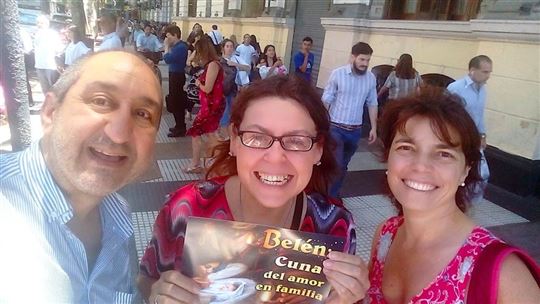 Sonia recounts: "People of different nationalities, religions and appearances were passing by…I was suddenly struck by the frenzy in which everyone was walking around. Their faces were worried and their hands were full of things, mobile phones; wallets; briefcases and bags full of presents, to the point that they could barely even take our Christmas card. ‘Jesus came for everyone’, I thought to myself. ‘He came for each and every one of them’. I felt called to give the card to everyone, without distinction, because He did not make any. He came for the happiness of us all. I do not know what will happen after this gesture, He will take care of it”. Many people avoided Sonia, refused the gift, but after hearing her say “Merry Christmas” they could not help but change their gaze, wonder and accept the card. Some even thanked her and reciprocated her greeting, letting a smile slip through, “as if touched, infected and changed by a desire for good”, adds Sonia. “I was surprised, above all, by a person in a suit and tie, in his fifties, wearing sunglasses. I gave him the card and said: ‘Good morning, Merry Christmas’. He grabbed it quickly and distractedly. A few moments later, he came back, took off his sunglasses and said: ‘Thank you, what you are doing is a very nice gesture, please excuse me. Happy Christmas to you too’. I also gave the card to a jasmine seller who was sitting at a bar. He asked me if he could have some more to give to the waiters. Then, one of these waiters came up to me asking for more, as he wanted to give them to his relatives.” Many people asked for more cards to give to their families and friends: "It strikes me that even in the middle of our busy lives, in these holidays that we often live in such a hurry, the words that we all need can reach everyone. Words that are a sign of peace and, ultimately, of salvation".

Viviana also took part in the Christmas Mission: "That day, before going, I read School of Community to prepare myself and I recoiled at the point when Fr. Giussani says that if we do not perceive that everything is given by the Lord, we lose the charm of reality. I answered this request, recognizing that everything was given to me". When she arrived at the Cathedral, a friend who was in charge of the organization warned her: "Only 1% of people stop to greet or thank you, the rest ignore you". Viviana recounts: "The truth is that I did not care, I just wanted to communicate all the good that is given to me. And something incredible happened: that 1% became the 99% who answered my greeting. I smiled, and people were surprised by this joy. They smiled back. Some even stopped to greet me. I did not discriminate against anyone: tramps, teenagers, families, students... Everyone was for me, Christ came for everyone. One girl particularly moved me. Her face was very distressed. When I greeted her, she looked at me and said: ‘You do not know how much I needed this greeting’". There were moments when people came in flocks, says Viviana: "I was struggling because I wanted to give the card to everyone. Suddenly I remembered that "hand-in-hand" that the Pope always talks about and I thought: ‘One by one. It is important to look into the eyes of those who come, even if ten people pass me by’. I am grateful for the education I receive upon this journey of CL and of the Church, in which I am reminded that everyone is precious in God’s eyes. Otherwise it would only be a continuous, impulsive and pretentious anxiety. In this simple and beautiful gesture, I could perceive how intense reality can be when you see life as a gift. The awareness that the most precious thing I have is this message, makes us a light for many".

Those who were not at the Cathedral experienced this gesture at work, distributing the cards to colleagues or, at school, to classmates and their families. The university students met in a square before mass. It was a “simple and beautiful” gesture for everyone, open to everyone, which can bring "peace and salvation" and that allows us to share what we have and what we are.

Friends from the community of CL in Buenos Aires