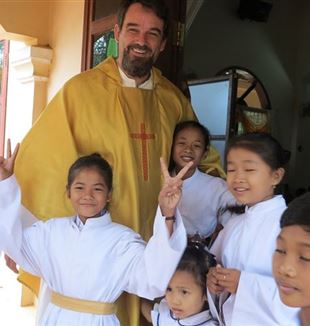 This time, I am not writing from the banks of the Mekong River, but from the banks of the Tiber. My superiors have asked me to help the PIME (Pontifical Institute for Foreign Missions) in Italy. And so here I am, in Rome, very nostalgic but also very grateful for the twelve years I spent in Cambodia.

It was not easy to leave the people who have become part of my family. I did not think that I would get so attached to them. I remember very well the day I arrived in Kdol Leu. When I got off the bus, I literally felt like I was running out of air, and I asked myself, "How am I going to live in this place?!". In the end, not only did I live there for ten years, but I also left my heart there.

Several times, in the days before my departure from Cambodia, I thought about the many fathers from Kdol Leu who, in these years, have had to leave their families. Forced by the difficult economic situation, they have gone to work abroad in places such as Thailand, Malaysia and Korea. Some of them have done well, but most of them have had to do a lot of hard work. I remember Vannà telling me about his long journey on foot to cross the Thai border, at night, in the middle of the forest. Deceived by the usual arbitrators who promised him the seas and mountains, he had to pay them a lot to then be left on foot, holding fake documents. Or Liu, who was eventually caught by the police and put in jail, before being sent back to Cambodia, even poorer than when he had started. Or Mol, who went to Korea at the age of fifty, got sick from the cold and had to come back for treatment. Thinking about them, I too found the strength to leave.

In Cambodia, when you talk to a person, it is customary to refer to the type of relationship you have with them through use of a personal pronoun: therefore, since I was, for many Christians, their lopok (father), they would use the work son when speaking to me about themselves. And I had to do the same thing, referring to myself with the word father. It is a bit strange and, at first, it made me uncomfortable. I felt like I was putting myself on a pedestal. For this reason, I preferred, at least with young people, to call them by name. It seemed like a small detail that would narrow the distance between us. Then, one day, a girl who grew up with me in Kdol, said to me: "No, father, you must not call me Meta, but daughter".
Thinking it over, I realized that in that case her "name" did not say enough, or at least it could not express the most important thing: the relationship. Our name indicates out individuality, but “daughter-father” indicates the relationship. Our own name, without this, is not enough. It is a truth that we all know well: one of the most disheartening things that can happen to us is to live without meaningful relationships, to have no one to whom we are important or not to have anyone who is important to us. So important that we decide to leave our homeland to go and seek our fortune abroad, willing to accept the most humiliating jobs, as I have seen so many fathers in Kdol Leu do. 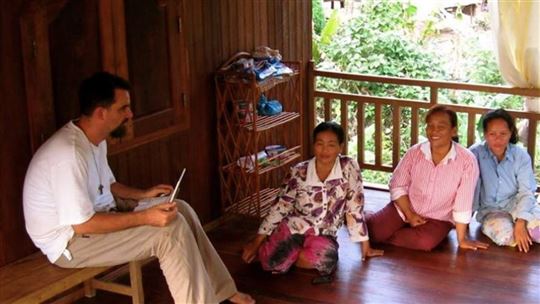 This is what another father did. He walked for hundreds and hundreds of kilometres on foot, all the way to Egypt, for his son. For a son who was not even biologically his own. I am referring to Joseph, the putative father of Jesus. A man who probably spoke little (in the Gospel he does not say a single word), like many of the Kdollian fathers mentioned above. Men cut down... with the spade. Simple people, who when they have to deliver a speech, easily limp and stumble, but when they work in the rice fields they can walk for hours, in the darkness of the night, through the forest, in the mud, without ever stumbling.

I have learnt so much from them. For example, from Praeng, a big, big man…almost like me! At first, he used to intimidate me, being a strong man of the village and its undisputed leader. His conversion has been the most striking conversion that has happened in these years. Several people confided to me that they were amazed to see how the Gospel had changed him: a great drinker, angry, arrogant, he stopped drinking, using violence, and put his authority at the service of others. When we said goodbye, before I left for Italy, we embraced and cried like two children. He too, when he spoke to me about himself, he said son.

Christmas, the birth of a child. Son of Joseph and son of God, who taught us to call Him as he called Him, not with a proper name, but Father.