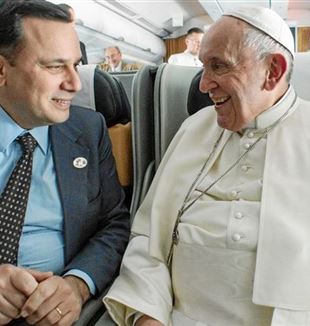 Monda responded to the young people’s questions by talking about himself, about the experience that led him to become director of the Vatican newspaper. He described different moments in his life, aware that the answer to a question is always better when one gives witness to what they are living, rather than offering ready-made phrases. Monda says that he is still trying to understand why, a year ago, he accepted the proposal to become director, leaving his position as teacher of religion, which he was so passionate about.

He spoke about the Pope's visit to the school that he used to teach at. It was, he said, greatly moving because it taught him that, in whatever context one lives, the method is always dialogue. Monda continued by saying that his aim is to include the gaze of young people in the Osservatore Romano. He was taught this by Pope Francis who, when visiting the school in Rome, wanted specifically to listen to the young people. For this reason, he wants to come up with something, within the pages of his newspaper, which will give young people a voice to fill the gap between generations.

A boy asked him what he could do for the Pope’s newspaper. Monda replied that his concern to do something was already something positive and that it already indicates the answer. As an example, he cited the film Groundhog Day, which, he says, demonstrates the beauty of life, where everyday everything begins again for us. "Our life is an answer, we are called and we must respond. I was called by the Pope and I had to respond to him, reporting his greatest concerns within the pages of his newspaper. It is a task of dizzying responsibility".

He then added that man often faces confused feelings, but joy comes before both confusion and fear. "We must remember that joy allows us to face everything”. For Monda, the fundamental fact of life is that everything can be lived in relation to someone, because relationships are what allow us to face confusion.

Monda ended the meeting by saying that what moves him and what, deep down, moves everyone is the curiosity to always discover something new, more about the other. One can get to know the world better beginning from the interest in the other, from the desire to understand who the other is.