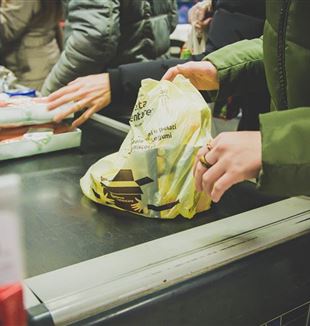 I always participated in the Food Collection as a donor, not as a volunteer. This year, I got involved with other young people through the Casa della Cultura Musulamana [Islamic Cultural Centre], after the organisers of the Food Back came to present the initiative to the Muslim community during Friday prayer. I participated as a volunteer in the supermarkets in Via Padova and Via Pompeo Mariani and, although there is a certain poverty in this area, I was struck by the people’s generosity.

Some people donated a small box of tuna, whilst others came purposefully to shop for the Food Bank. And there were others who only thanked us for what we were doing. People gave what they were able to give. It was an opportunity to meet and talk to people about important issues such as solidarity, food waste, awareness of the poor. Whilst I was packing the food in boxes, two children approached me together with their parents, handing over their shopping bag, and they thanked me for our commitment. I really appreciated the gesture and too see parents who educated their children to overcome difference and to be sensitive towards poverty.

Among those who gave donations there were also many foreigners, including an Arab couple who, intrigued by the initiative, wanted more information. Since they did not speak Italian well, I explained the project to them in Arabic. They asked me if the project was aimed at the poor people from the Muslim community and I replied that the project was aimed at all poor people, without distinction of nationality or religion. They went into the supermarket and came out and donated food, saying that they wanted to do their part. For me, it was a wonderful experience in which I saw the solidarity of people, their desire to work and help others. Above all, all it reminded me of a saying of the prophet Muhammad: "The best people are those who are most useful to others"."