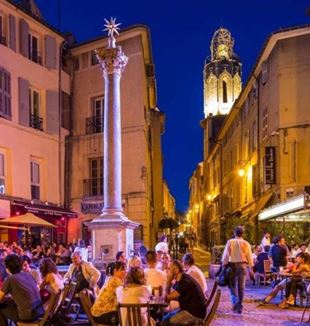 On the beginning of the year day for the South of France, whilst we sang "The things that I see" (Bay Ridge Band, 1999), I wondered: if someone who didn’t know us came to live these two days with us, would they not, at some point, ask: “Who on earth are these people?”

Seeing these friends gathered there, I could not contain these questions. All these faces, known to me through the many events lived together, known to the point of being able to name them one by one. Nevertheless, finding these ever new and alive faces filled me with surprise. The surprise of us having found each other in order to begin, once again, to look at Christ: the emotional center of our humanity.

It’s not a cult where there is an inside and an outside, a good and an evil. Being “magnetized” by His Presence, within this companionship, helps me always remain poor. Or as T.S. Eliott said in "The Rock": "bestial as always", that is, deeply rooted in the vicissitudes of life, with all the limits I might have. But by remaining poor, because this company helps me to never forget to beg for His Presence.

After so many years on this journey in this companionship, after so many gestures that might seen identical, I am surprised that no fatigue or difficulties have spared me. In fact, it even becomes an opportunity, as Father Filippo Belli recalled during his testimony, to rediscover that "a Presence is face charged with proposal".
Being able to return to this place gives me the opportunity to enjoy this "unexpectedness", to be surprised again by the fact that my life really is an endless story, that it is, I would even dare say, infinite.