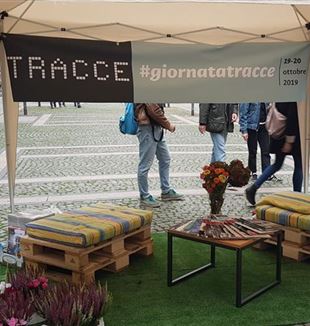 A month ago, the “Traces Day” initiative was proposed to us and, before that, we were given the opportunity to involve ourselves in its organization. In the last two weeks, we met several times, in the evening, with those who had responded to the invitation: a small group of a dozen people, all very different. "Why do we sell Traces? What do we want to communicate? At a time when I am overwhelmed on several fronts, why involve myself in this initiative?".

From the beginning, we wanted the day, and its organization, to be a moment for us, that it might have something to do with our lives. This, together with the desire to communicate a 360 degree horizon and a beauty that can be sought in all current events- two of the main characteristic of the magazine - led us to think of the form that “Traces Day” would take: a gazebo in which we would recreate a small living room that would invite people to read, panels with snippets of articles on current issues (work, Europe, immigration) from previous Traces, copies of these same articles that we would distribute to passers-by and games for children. Finally, some alpine songs, dear to our history, but also to dear to ordinary Piedmont citizens. It was nice to see how each of our contributions led us to build something rich and beautiful, with great attention to detail. It was an opportunity to rediscover Traces and experience the beauty of our friendship, which is what we wanted to communicate during the day.


Saturday afternoon, from 2pm to 8pm: the sale of Traces, in Via Roma, in the center of Turin. Many people from the CL community in Turin took part, families with children, high school and university students, the nuns, and many other friends... As Enrico said, "I hadn't experienced such a beautiful unity with so many friends of the movement in a long time"; we were, first of all, amazed at the unity of the moment and we enjoyed, as Giovanni said, the beauty of our songs.

Above all, we were able to experience the truth of what Fr. Giussani says: “We were given the gift of faith to communicate it…so that man may know Christ: this is the task of those who are called and of the people of God”. In fact, alongside this experience of being people of God, we lived the beauty of meeting people and proposing “what we hold dearest”.
Without reducing the effort of attempting to start conversations or of reacting to those who expressed, not always in a kind way, their disinterest, the many encounters we made are imprinted in our minds: a Peruvian mother and her son who, listening to the songs, asked "Who are these people?" and they left their number so they can be invited to a meeting, or a lady whose husband is an ex-alpine who, when we were singing, asked us who we were.

Or Kasimiro, a guy left without work and without a home who has been living, for some months, under the portico near our gazebo. Intrigued, he approached the panels: we promised him that we would keep each other company during the afternoon and that we would pass by in the evening to say bye to him.

It's great to be able to get to know people starting from what is meaningful in life and then to re-discover it in your heart. We were able to experience the truth of Pope Francis’ call to be a sign of an outgoing Church. Openness to the other and being witnesses is what really makes us rediscover the beauty of Christianity and the greatness of our nature, made to meet and share humanity with those around us.