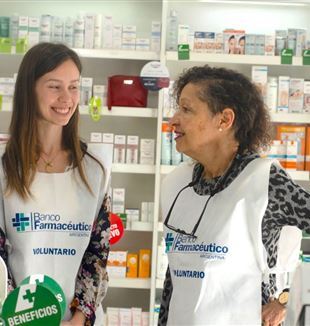 We are a "human" group, with all its implications. Some of us are very good friends, others are “only” companions in this adventure. Yet, we are all united by Another, He who makes the activity of the Pharmaceutical Bank and the Annual Day of Medicine Collection possible, beyond the limits and poverty of each of us.

This year, we organised various groups, according to everyone’s availability and capability, and we divided the tasks so that we could better advertise the initiative and attract volunteers. "The "new people" have impressed me", said Semper, one of us: "I found myself looking at them with a different gaze than usual, treating them with a greater affection, congratulating them and appreciating their help”. 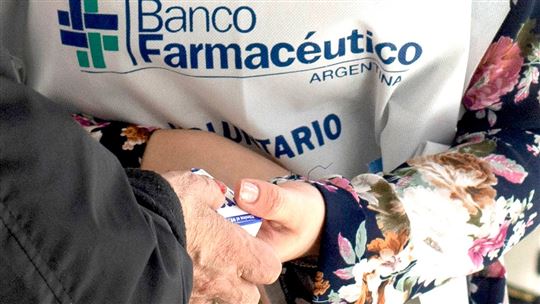 It's a special Saturday that also affects life at home, in the family. Silvana recounts: "Lunch wasn’t ready at home. I told Tomás to go to the supermarket and buy the usual meat as I wouldn’t get back in time. He complained...". Here, the question arises: “Why are we doing this? Why am I doing this? The question is the same for everyone. I pray to the Virgin of Lourdes: Let your will be done, but we want to help others, so I entrust this day to you.” This is true for everyone: it is true for what we leave behind, for what we offer, because it is the first day of spring and the students have the day off. There might just be a few people around, and people have little money, and…Nothing, we just need, again, to ask and trust.

We worked hard for a whole year, we had meetings and moments of confrontation, but, says Oscar, "we would reduce what happened if we did not look at the beauty that this work has revealed. It is really the work of Another that reveals itself.”

For the volunteers, even for regulars, it is always a novelty to be in the pharmacies, four hours can either pass quickly or be never-ending. One of us said: "Very few people came in, and, in general, they listened to the initiative, but then they gave evasive answers. After almost an hour, no one had yet contributed. I felt discouraged. Then someone came and listened to me carefully: "What’s worth donating?", she replied. She placed the medicine in our box and I thanked her, and she said: "No, thank you; luckily, there is someone who takes care of such things"".

Silvana experienced completely the opposite. Her pharmacy was full of customers and she couldn't keep up with everyone. Maria Rosa, a Venezuelan who lives in Buenos Aires, was with her. Silvana was very impressed with her: "When she explained to the people, she was almost too forceful. She would go herself to get the products from the shelves and would give them to the people so that they could pay for them at the till. What drove her? She gave her time for others, without even knowing what the Pharmaceutical Bank was. She put her freedom at stake, as well as her heart.”

During the day, we met people who listened to us, others who decidedly told us “no”, explaining that they already had many expenses or that they were already participating in other initiatives. But many collaborated: "We always judge people at first sight," says Silvana again: "If he is dressed like that he won’t buy anything, if he buys creams he will buy plasters ... Nothing is further from reality: I was struck by a twenty-two-year-old guy who arrived with headphones on. He took them off to listen to me, he read the flyer, he waited his turn and chose and bought five products for us. I wasn’t expecting this: in his world, with his music... Instead, he was attentive to the needs of others. And he thanked me for the day, for the opportunity to donate.”

READ ALSO - "Towards Aparecida, in the company of my solitude"

Sonia, another volunteer, also made a “discovery”: “People were not obliged to give anything. Good exists and it’s inexplicable, it isn’t taken for granted. And when it happens, when you see people move with affection and in search of good... That's it, you feel an immense gratitude. Because all this exists, because they are there.”

Many customers asked us if the products really reach those in need but, in general, people contributed with trust, as happened to Miguel: "I left the contact details of the Bank to two very generous people, so that they could receive confirmation that the products had arrived at their destination: But their reply to this was “No, we trust you””.

Oscar sums up the 2019 Pharmaceutical Collection: "Our friend Julián says that charity leads us to become aware of the real needs of the people who live next door to us, but also of our own. Who truly responds to what we lack? I want to keep this question open.”